Ben Schwartz: 'There are a lot of Knicks moments where I got so upset' 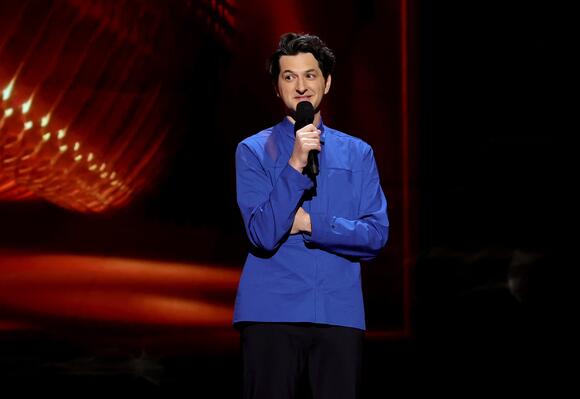 Ben Schwartz is known for his comedy and acting, but there's more than just laughs behind the "Parks and Recreation" star.

Schwartz is a big sports fan and grew up watching Kenny Mayne and the rest of the "SportsCenter" anchors every morning. It helped shape his comedy and he caught up with Mayne on Audacy's Hey Mayne podcast.

Sports cause a wide variety of emotions for fans. Mayne and Schwartz are no different.

“I cried at the Ice Bowl,” said Mayne (22:54 in player above). “Bart Starr sneaking it over to beat the Cowboys in Green Bay. Look it up. Google the Ice Bowl.”

While Mayne’s first sports memory brought tears of joy, he has others that weren’t quite as sweet.

“I cried when I got cut from baseball. Kind of held the tears in, but I wasn’t that good at baseball,” Mayne said. “Football I was pretty good, I could throw. Played in college, I wasn’t great. I was good enough. Baseball, I couldn’t hit the damn ball. Every year I’d get cut in March and they’d move me down.”

“I played basketball in high school,” Schwartz chimed in. “I got better at basketball in college because there weren’t coaches putting so much pressure on me and making me feel like I wasn’t very good. When I was in college I got to be better,” he said.

Schwartz also shared shedding tears over his favorite team, but these were tears that are all too familiar for Knicks fans.

Schwartz was 14 during that loss and had just recently moved from the Bronx to West Chester, he explained.

“I remember going to my dad, it was late, I go ‘Dad, I gotta shoot around. Can I shoot around?’ He’s like, ‘You can go shoot around, Ben.’ And I’m outside with like a tiny little light on me crying and shooting baskets, being like ‘How did we lose!’ I was so invested in the Knicks.

"We would get so close and then we could just never pull it off. I remember that being a huge moment. There’s a lot of Knicks moments where I got so upset.”

“You needed to let that out and this was the time to do it,” Mayne replied.

It can be argued that the off-court ventures of Los Angeles Lakers star LeBron James are just as successful if not more than what he has accomplished on the basketball court. And now he is teaming with a pair of NBA All-Stars for his latest. LRMR Ventures, the family office...
LOS ANGELES, CA・2 DAYS AGO
Audacy

The Dolphins quarterback appeared to suffer his second concussion in four days on Thursday Night Football against the Bengals in Cincinnati, on a hard sack-slam by Bengals defensive lineman Josh Tupou.
CINCINNATI, OH・16 HOURS AGO
Audacy

Video surfaced earlier this week of Angels slugger Mike Trout declining to sign autographs for two young fans outside his hotel, stirring an online debate about autograph etiquette and how much privacy celebrities should be afforded.
MLB・2 DAYS AGO
Audacy

Shaq declines to address Ime Udoka situation: 'I was a serial cheater'

The Diesel passed on offering up his thoughts on the scandal involving suspended Celtics coach Ime Udoka on the most recent episode of his podcast – because he himself has admitted to philandering.
BOSTON, MA・20 HOURS AGO

Once upon a time, Cris Collinsworth nearly became the play-by-play announcer on Sunday Night Football. Read more about this story on Audacy Sports.
NFL・2 HOURS AGO
Audacy

After Tua Tagovailoa was stretchered off the field Thursday night, Mike Florio told the “Joe Rose Show with Zach Krantz” that he’s astounded the Dolphins quarterback even was allowed to play.
NFL・4 HOURS AGO
Audacy

The league was reportedly investigating after the Miami Dolphins apparently spotted someone filming their Wednesday practice in Cincinnati ahead of Thursday night’s game against the Bengals.
CINCINNATI, OH・21 HOURS AGO
Audacy

Aaron Judge's week-long wait for home run No. 61 is a reminder of how special it is

Keith McPherson and Sweeny Murti of the Audacy Original Podcast “BXB” talked about New York Yankees outfielder Aaron Judge’s historic home run and how the week-long wait only makes it that much better.
BRONX, NY・1 DAY AGO

A.J. Brown is so proud of Jalen Hurts: ‘It’s everything I can imagine right now’

Eagles wide receiver A.J. Brown joined the Audacy Original Podcast “The Crew” and talked about his connection with Jalen Hurts, Nick Sirianni’s coaching style, and how happy he is to be in Philadelphia.
PHILADELPHIA, PA・20 HOURS AGO
Audacy

Appearing on The Dan Le Batard Show with Stugotz, Bills receiver Stefon Diggs said “he’s never been more tired” after playing in 90-degree heat Sunday at Miami, requiring IVs in both arms after the game.
NFL・2 DAYS AGO
Audacy

During Wednesday’s “Midday Show with Andy & Randy”, Randy McMichael shared the story of John Abraham, who was on the opposing team, asking for a favor late in the blowout game.
NFL・1 DAY AGO
Audacy

Kyle Schwarber (jokingly) boos David Ross, who had booed him a day earlier

David Ross and Kyle Schwarber, former teammates on the Cubs, have had an entertaining back-and-forth this week with the Phillies in Chicago.
PHILADELPHIA, PA・1 DAY AGO

Terrell Owens: We’ve seen best of Carson Wentz when he was with Eagles

Philadelphia Eagles linebacker Haason Reddick joined the Audacy Original Podcast “Go Birds” and talked about how the Eagles knew from the get-go that it would be a great defensive game in D.C.
PHILADELPHIA, PA・2 DAYS AGO
Audacy

Terrell Owens: Jalen Hurts' level of play 'is no surprise to me'

Hall of Fame wide receiver Terrell Owens had high praise for Eagles quarterback Jalen Hurts and the rest of the Philadelphia offense when he joined the Audacy Original Podcast “The Crew” this week.
NFL・2 DAYS AGO

Brian Baldinger: ‘The development of Jalen Hurts is so real’

Brian Baldinger and Jason La Canfora of the Audacy Original Podcast “In The Huddle” had high praise for Jalen Hurts and the rest of the Eagles offense after three strong showings to start the season.
PHILADELPHIA, PA・1 DAY AGO