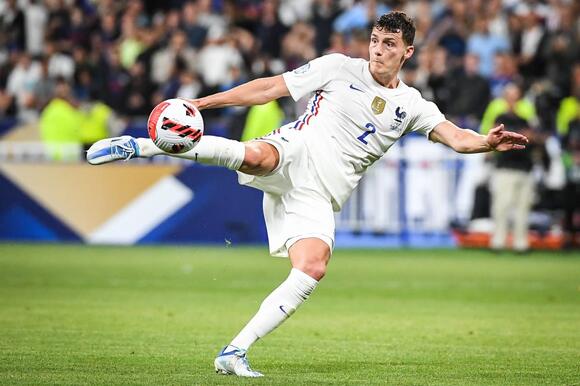 French Defender Benjamin Pavard could be leaving the German Champions this summer with Chelsea, Juventus, and Atletico Madrid all showing great interest.

French Defender Benjamin Pavard could be leaving the German Champions this summer with Chelsea, Juventus, and Atletico Madrid all showing great interest.

According to Florian Plettenberg , talks over the World Cup winner's future with Bayern Munich are currently ongoing. Both parties can imagine a departure from the club shortly.

The 26-year-old played a versatile role last season, playing a mixture of right back and centre back this could be something for Thomas Tuchel to look at as the future of Cesar Azpilicueta is still unknown.

The Spanish defender looks keen to join Barcelona after making 474 appearances for the Blues and becoming club captain. The 32-year-old is not the only one pushing for a move to Barcelona, Marcos Alonso is also looking to join the Spanish giants where they will find former teammate Andreas Christensen.

This may leave Chelsea with an even bigger defensive issue which could tempt the Blues to try and sign the versatile defender. This will add Pavard to the massive list of defenders the Blues look to bring to Stamford Bridge.

Chelsea has already made Matthijs De Ligt their primary target to bring in this summer and has been in constant contact with Juventus. However Pavards club Bayern Munich is said to now be one of the favorites to sign the Dutch defender.

Chelsea is set to take on Crystal Palace tomorrow in the return of Premier League football, here is what happened the last time the two sides met.
PREMIER LEAGUE・1 HOUR AGO
Chelsea Transfer Room

Crystal Palace vs Chelsea: Where To Watch & Team News

Crystal Palace take on Chelsea tomorrow in a 3pm kick-off in the Premier League.
PREMIER LEAGUE・3 HOURS AGO

RB Leipzig forward Christopher Nkunku has already completed a secret medical at Chelsea last summer, ahead of rumors he will join the Blues.
PREMIER LEAGUE・15 HOURS AGO
Chelsea Transfer Room

Chelsea are not scared of the interest from Liverpool and Real Madrid, and are prepared to fight to sign Jude Bellingham.
PREMIER LEAGUE・2 DAYS AGO
Chelsea Transfer Room

Chelsea Women host West Ham United in the WSL tomorrow evening and the Blues will be ready.
SOCCER・2 DAYS AGO

Armando Broja Talks On Turning Down England For Albania

The Premier League returns after almost a month for Chelsea, so here are the predicted lineups for tomorrow's clash with Crystal Palace.
PREMIER LEAGUE・1 HOUR AGO
Chelsea Transfer Room

Chelsea Owners In Talks To Buy Portuguese Side Portimonense

Chelsea are prepared to buy Portuguese team Portimonense as the club explore the possibility of a multi-club ownership group.
PREMIER LEAGUE・1 DAY AGO

Anthony Gordon was the subject of heavy interest from Chelsea in the summer, and he has been speaking about it recently.
PREMIER LEAGUE・1 DAY AGO
Chelsea Transfer Room

Frenkie De Jong was part of the longest saga in possibly football history, and it still may not be over, with Manchester United still hoping for the player.
PREMIER LEAGUE・3 HOURS AGO
Chelsea Transfer Room

Inter Milan Could Reconsider Move For Trevoh Chalobah In January

Trevoh Chalobah could be chased by Inter Milan if their centreback Milan Skriniar departs the club in January.
PREMIER LEAGUE・2 DAYS AGO
Chelsea Transfer Room

Chelsea are desperately trying to play catch up in the race to try to sign England star Jude Bellingham.
PREMIER LEAGUE・18 HOURS AGO
Chelsea Transfer Room

Here are the details of how you can catch Chelsea Women in action against West Ham United, for the UK and the USA.
PREMIER LEAGUE・2 DAYS AGO