Snake slithers onto woman’s car, hitches a ride through Missouri 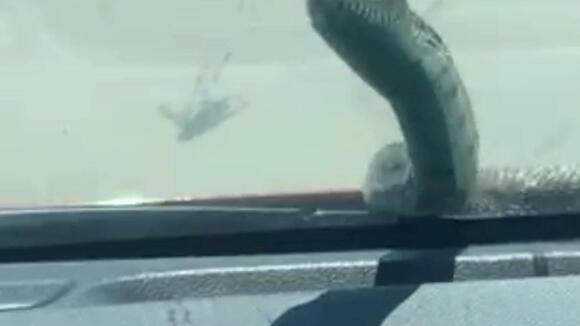 A woman who used to live in Tulsa captured video of an unwelcomed passenger that slithered into her car.

Vicki Ruhl is a Missouri woman who still has family and friends in the Tulsa area. She was visiting some friends on a rural farm, and when she left, a snake slithered in.

Vicki says she noticed the snake on her windshield while she was driving. “And I saw the snake, and it was my worst nightmare come true in that moment. It was so surreal.”

She says she didn’t want to pull over because she says was worried about being stuck on the side of the highway in the heat, not knowing what to do. She focused on not crashing the car. She says she was so scared, she even missed her exit at one point.

“I was just frightened; just terrified,” She says. “Where am I going to go. To have to experience that while driving, I’ll never forget it.”

Vicki called 911, but police advised her to call a reptile rescue. Eventually, she got off the highway and parked. The snake slithered off to safety.

FOX23 reached out the Tulsa Reptile Rescue. Jonathan Gibson says looking at the video of the snake, he thinks this was bullsnake, which is not poisonous.

He suggests if people see a snake in their home or car, “first of all don’t panic. Snakes are usually just trying to find a place to hide, rest or keep warm. Don’t freak out or start your car on fire. Just relax.”

He says, “If you’re brave enough, open all the doors and get a long stick, like a broom, to push the snake into the right direction.”

Police should have came to make sure she was kept safe atleast! And THEY should have been the ones to get hold of the proper ppl to come take care of this situation! What if she had little ones in the car with her!!!?? What if it was a poisonous one!? Geeze....a little help here !!!😡😡😡😡

was it in the car or on the car? the Pic shows it on the outside of the car.

TULSA, Okla. — Tulsa police suspended the search of a man who led them on a chase after he seemingly escaped officers through a drainage system. Police said just before 3 a.m., officers tried to stop a car for not having its headlights on near East 11th Street and U.S. Highway 169. Police said instead of stopping, the car kept going, leading police on a chase.
TULSA, OK・6 HOURS AGO
KRMG

Collision with dump truck shuts down ramp in west Tulsa

TULSA, Okla. — The Oklahoma Highway Patrol (OHP) said an exit ramp on Interstate 244 in west Tulsa is closed due to an accident involving an overturned dump truck. OHP said around 11:00 a.m. the I-244 northbound exit ramp to West 23rd Street South (Exit 3A) closed due to the collision that injured at least one person.
TULSA, OK・50 MINUTES AGO
KRMG

TULSA, Okla. — Tulsa police identified David Getsinger as the man killed during a confrontation over a stolen car on Saturday. Police said 32-year-old Getsinger and 43-year-old Dustin Leleux stole a vehicle near West 15th Street and Riverside Drive in midtown Tulsa. The owner of the vehicle saw Getsinger...
TULSA, OK・1 HOUR AGO

PORTLAND, Ore. — A newborn boy reported missing from a Portland area hospital earlier this week was located safe on Thursday, officials with the Oregon Department of Human Services confirmed. Kanon Zee went missing from the medical facility on Monday, along with his mother, Kara Zee, and father, Jonathan...
PORTLAND, OR・17 HOURS AGO
KRMG

TULSA, Okla. — Tulsa police are investigating a homicide after a truck theft turned into a chase that ended in south Tulsa on Saturday. Dustin Leleux was taken into custody and is facing several charges including second-degree murder, first-degree robbery and larceny from a vehicle, according to jail records.
TULSA, OK・1 DAY AGO
KRMG

NC sheriff placing locked-up AR-15 rifles in some schools Sheriff Buddy Harwood said, "Hopefully we'll never need it, but I want my guys to be as prepared as prepared can be.” (NCD)
LAW ENFORCEMENT・4 HOURS AGO
KRMG

TULSA, Okla. — Two Missouri fugitives were caught in an east Tulsa motel room Thursday by Tulsa police. Colby Fitts and Kayla Fitts were wanted on charges out of Taney County, Mo. Police said officers went to a motel near East 31st Street and South Memorial Drive around 3...
2 DAYS AGO

TULSA, Okla. — After Tulsa parks pools closed on Saturday, dogs were given the chance to swim at the annual K-9 Splash. The K-9 Splash was held at the McClure Pool, near 11th and Memorial, and took place over two sessions on Sunday. All dogs participating were required to...
TULSA, OK・17 HOURS AGO
KRMG

VIENNA, Wis. — Wisconsin firefighters rescued a maintenance worker who was stuck in the drum of a concrete mixing truck, authorities said. The man fell into the empty drum while doing work in Vienna, located about 85 miles west of Milwaukee, WMTV reported. There was no concrete in the drum but it was spinning when the man tumbled into the mixer on Monday at about 9:30 p.m. CDT, the television station reported.
WISCONSIN STATE・1 DAY AGO

TULSA, Okla. — Jose Lopez has been arrested for second-degree manslaughter, according to the Tulsa Police Department (TPD). On Friday afternoon, police said a witness reported an accident at the intersection of 11th and 161st East Ave. Officers arrived on the scene and found one of the drivers was...
TULSA, OK・1 DAY AGO
KRMG

HENDERSONVILLE, Tenn. — A Tennessee man is accused of animal cruelty after nine dogs were found inside a home in “deplorable conditions” that included the corpses of other dogs, authorities said. David Hendrix, 57, of Hendersonville, was charged with nine counts of aggravated animal cruelty, according to...
HENDERSONVILLE, TN・22 HOURS AGO
KRMG

Fraudsters are using local businesses as part of their scams

TULSA, Okla. — The Better Business Bureau (BBB) told FOX23 how scammers are taking advantage of people looking for work. Now they’re detailing how someone tried to use a local business as part of their scam. Christina Hageny is the president of Valor Payroll Solutions in Tulsa. She...
TULSA, OK・5 HOURS AGO
KRMG

ALBUQUERQUE, N.M. — New Mexico Gov. Michelle Lujan Grisham said Saturday she will send additional state police to Albuquerque after the fourth murder of a Muslim man in the city in recent months. "I am angered and saddened that this is happening in New Mexico, a place that prides...
ALBUQUERQUE, NM・11 HOURS AGO
KRMG

SAND SPRINGS, Okla. — Sand Springs Police Department have released the body cam footage from an officer-involved shooting that happened during a high-speed chase Monday. Police say it started when they responded to a theft call at a Tractor Supply store in Sand Springs. Officers tracked down three suspects, who refused to pull over.
SAND SPRINGS, OK・2 DAYS AGO
KRMG

TULSA, Okla. — A Navajo woman hopes to raise awareness about missing and murdered indigenous people by walking across the country. Seraphine Warren hopes her walk brings attention to hundreds of missing and murdered indigenous people all across the country. She became an advocate after her aunt, 63-year-old Ella Mae Begay, went missing.
TULSA, OK・2 DAYS AGO