At least three homes were damaged by a tornado that unexpectedly touched down in Nebraska early Monday, lofting debris in the air and leaving a trail of destruction in its wake.

The tornado struck around 12:55 am, weather officials say, just outside Grand Island.

Several homes in Hall County were damaged by the cyclone, which was unexpectedly spawned by a line of severe storms that swept across the southwest and central part of the state.

The tornado saw multiple towns within the city's limits left without power, and was reportedly so powerful it launched debris in the air that was detected by radar.

Photos show some of the damage to homes hit by the unexpected whirlwind.

Scroll down for video:

Power lines are also down in the area, officials said, adding the damage is still being assessed at this time.

Photos show some of the homes savaged by the tornado early Monday, with at least one house, located Between A and B road on 3rd road, seemingly destroyed.

Another house, located at 978 West Schimmer Drive, was also damaged, photos show, with the tempest downing trees and mangling a fence outside of the domicile. 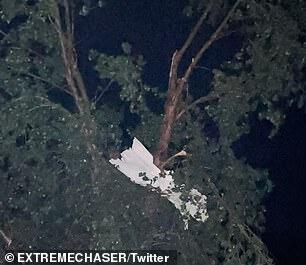 A farm between Stuhr and Gunbarrel roads was also devastated by the storm, which also saw powerlines along Highway 34 and Gunbarrel Road downed, with photos showing debris strewn along the roadway.

Another home on S. Locust St. was also damaged by the storm, officials said.

Officials are telling citizens to avoid areas along Schimmer Drive and east of South Locust St as they assess the damages left by the storm.

Radar data recorded a overnight detected rotation that indicated winds early Monday were so strong, that debris was lofted in the air.

The National Weather Service in Hastings is assessing the damages as of early Monday morning.

So far, no injuries have been reported.

A Texas police department refused to kotow to a woke mob after an officer posted a photograph of himself posing with Kyle Rittenhouse to the force's Facebook page. In the photo, Rittenhouse, who posed with an unidentified officer from the Thrall Police Department, could be seen grinning from ear to ear in front of a patrol vehicle.
THRALL, TX・1 DAY AGO
Daily Mail

Rudy Giuliani has now been told he is the target of a CRIMINAL probe into efforts to overturn the election ahead of his testimony in Atlanta later this week: Walls close in on more Trump allies

Rudy Giuliani has now been told he is the target of a criminal probe in Georgia surrounding his efforts to overturn the 2020 presidential election on behalf of former President Donald Trump. The New York Times reported the development Monday, citing lawyers for Giuliani. The ex-mayor has emerged as the...
ATLANTA, GA・1 HOUR AGO
Daily Mail

A ceremonial queen, a powwow and Navajo dance routines helped mark the 100th anniversary of New Mexico's celebration of Native American culture that was held over the last 11 days. The Gallup Intertribal Ceremonial began in 1922 and is one of the state's oldest and most cherished annual occasions honoring...
THEATER & DANCE・2 HOURS AGO
Daily Mail

Donald Trump has seen his poll numbers improve after the raid at his Mar-a-Lago estate, at the expense of what many see as one of his key rivals in 2024. The former president's share of the potential Republican primary voters boosted from 53 percent in mid-July to 57 percent on August 10, according to a Politico/Morning Consult poll.
FLORIDA STATE・19 HOURS AGO