Gunman opens fire on I-95 driver in Richmond 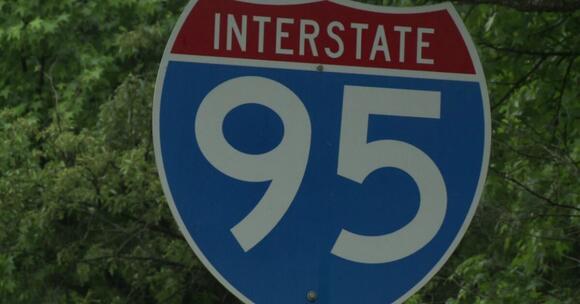 RICHMOND Va. — Police are looking for the person who opened fire on Interstate 95 in Richmond early Monday morning.

The gunfire injured a driver.

"Virginia State Police was notified of a single-vehicle crash along the southbound lanes of I-95 near the 71 mile marker in the City of Richmond. The Honda Civic was eventually located at a gas station in the 4400 block of Commerce Road, just off Bells Road Exit 69," a Virginia State Police spokesperson wrote in an email. "The driver of the vehicle, a 30-year-old male from Richmond, Va., was located inside the Honda and found to be suffering multiple gunshot wounds. He was transported to VCU Medical Center and is being treated for serious, but non-life-threatening, wounds."

Police said it appeared the Honda Civic driver was headed south on 95 when a gunman fired at least 10 shots at his car.

"The Honda ran off the road and struck the guardrail, but the driver was able to continue off the interstate and pulled into the gas station on Commerce Road," the police email continued. "The driver has not been able to provide any suspect or suspect vehicle description. He was the only person in the Civic."

The shooting was reported at about 2:42 a.m. on Monday, July 4. That's less than an hour before six people were shot at The 4 Cyber Cafe, an after-hours club, on Broad Street and Foushee Street in downtown Richmond.

"State police is in contact with the City of Richmond Police Department, but, at this stage of the investigation, there is no evidence to indicate this shooting is connected to the mass shooting that also occurred overnight on Broad Street," the email continued.

Anyone with information about this shooting was asked to call Virginia State Police at #77 or 804-609-5656.

A Henrico County truck hit her car. Then the driver sped off.

“They need to pay for my car, for my doctor bill, my injuries. Get this truck driver out of the road because for her to leave this scene of the accident. I'm sorry, she should be fired."
HENRICO COUNTY, VA・17 HOURS AGO
WTVR CBS 6

A teenage driver admitted to police he drank alcohol and ingested drugs prior to a Saturday morning crash that killed one cyclist and injured another.
RICHMOND, VA・1 DAY AGO
WTVR CBS 6

Laquan Smith of Wakefield, Virginia and the other teen were brought to the hospital where Smith succumbed to his injuries.
PETERSBURG, VA・1 DAY AGO

Emmanuel Dewayne Coble, 27, of Hampton, was arrested on August 11 and charged with first-degree murder and use of a firearm in the commission of a felony.
HANOVER COUNTY, VA・1 DAY AGO
WTVR CBS 6

Officers were called to the 1300 block of Coalter Street just before 1 a.m. for a report of a person shot, according to Richmond Police.
2 DAYS AGO
WTVR CBS 6

An 18-year-old driver was charged with driving under the influence and manslaughter in a crash that killed a bicyclist and critically injured another rider in eastern Henrico County Saturday morning.
HENRICO COUNTY, VA・3 DAYS AGO
WTVR CBS 6

Despite another deadly weekend in the city of Richmond, Mayor Levar Stoney is hopeful that a gun buyback program will help stem the tide of violence.
RICHMOND, VA・1 DAY AGO
WTVR CBS 6

An investigation is underway after the body of a young man was found near the football field at Atlee High School Saturday afternoon.
MECHANICSVILLE, VA・2 DAYS AGO

The CHIPS and Science Act is a $52 billion boost to the nation's semiconductor industry, which manufactures the diminutive chips that power everything from smartphones to computers to automobiles.
VIRGINIA STATE・16 HOURS AGO
WTVR CBS 6

A tragic accident Saturday took the life of Jonah Holland who was killed on her bike by a driver who police say was drunk.
HENRICO COUNTY, VA・9 HOURS AGO
WTVR CBS 6

With the help of our friends at Virginia Credit Union, Wayne surprised him with some things to help keep him safe while he's on the job.
DINWIDDIE COUNTY, VA・1 DAY AGO
WTVR CBS 6

Three residents and one firefighter were taken to the hospital after a two-alarm fire early Saturday morning at the Birchwood at Boulders Apartments.
CHESTERFIELD COUNTY, VA・3 DAYS AGO
WTVR CBS 6

While African Americans make up 19 percent of Virginia’s population, they represent 50 percent of the patients on the state’s organ transplant waiting list, according to LifeNet Health.
VIRGINIA STATE・14 HOURS AGO
WTVR CBS 6

The 136th generation of Virginia State Troopers is actually the smallest graduating class in Virginia State Police history, but this team says they bonded together quickly.
VIRGINIA STATE・4 DAYS AGO
WTVR CBS 6

Richmond cycling community in mourning: 'Do it in Jonah's honor'

A teenage driver admitted to police he drank alcohol and ingested drugs prior to a Saturday morning crash that killed one cyclist and injured another, according to court documents.
RICHMOND, VA・1 DAY AGO