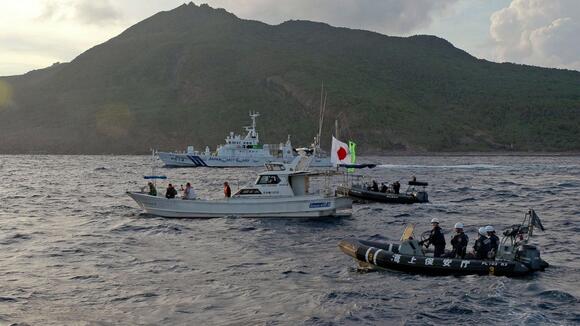 Japan protested to Beijing after spotting Chinese and Russian warships just outside its territorial waters around the disputed East China Sea islands on Monday.

The Chinese warship’s presence was confirmed about 40 minutes after a Russian frigate had entered the waters for more than an hour, the ministry said.

It was not immediately clear what was behind the latest Chinese-Russian military activity in the area. Japanese defense officials mentioned a possibility that the ships may have been there to avoid a typhoon.

“The Senkaku islands are an inherent part of Japan’s territory historically and under international law. The government will deal with the matter calmly but firmly to protect the Japanese land, territorial waters and air space,” Kihara said.

There was no violation of the territorial waters, he said.

“The activities of Chinese vessels in waters nearby are lawful and justified,” he said at a regular news conference. “Japan has no right to make such irresponsible remarks.”

Japan sees China’s increasingly assertive military activity in the East and South China seas as a threat to regional stability. Toyo is especially sensitive to Chinese activities near the disputed islands.

Kihara said that Monday’s incursion into the contiguous zone, which is between the territorial sea and the wider exclusive economic zone, by the Chinese warship was a fourth such event since June 2016.

fighting over territories. land. food. people killing each other. pray for humanity 🙏 💔

The Japanese need to put Bouygues armed with torpedoes. Any one entering Japanese waters without a certain code (provided by the Japanese) it arms itself and launches.

China and Russia are provoking WW3 and it won't be long before it happens.

Sept 21 (Reuters) - President Vladimir Putin on Wednesday ordered Russia's first mobilisation since World War Two and backed a plan to annex swathes of Ukraine, warning the West he was not bluffing when he said he would be ready to use nuclear weapons to defend Russia. read more.
POLITICS・33 MINUTES AGO
ABC News

Moscow tries to draft fleeing Russian men at the borders

LARSI, Georgia -- Long lines of Russians trying to escape being called up to fight in Ukraine continued to clog highways out of the country on Wednesday, and Moscow reportedly set up draft offices at borders to intercept some of them. North Ossetia, a Russian region that borders Georgia, declared...
POLITICS・2 DAYS AGO
The Guardian

Russia-Ukraine war: Moscow accused of killing citizens it claims are its own after illegal annexations – live

Investments and pensions: what can you do about UK financial turmoil?