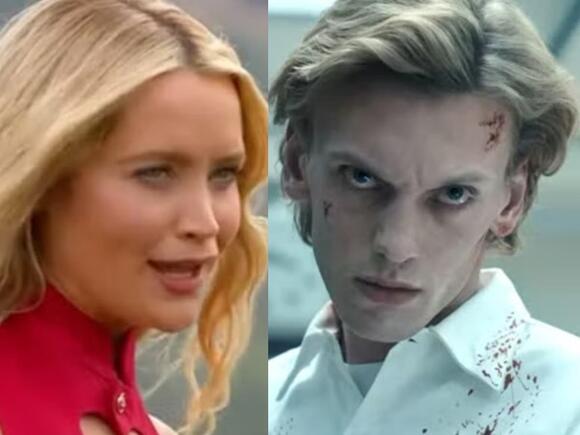 In one of the more unsual TV crossovers of the year, Love Island presenter Laura Whitmore has left a comment on the Instagram post of a Stranger Things star.

Whitmore – who returned to host the current series of the ITV reality dating show – commented on actor Jamie Campbell Bower’s Instagram photo of himself in costume as Stranger Things villain Vecna.

“And the new bombshell entering the villa is… Vecna! Needs some factor 50, though,” Whitmore joked.

The TV presenter’s comment attracted many likes from fans of both shows.

Two stars of the series, Millie Bobby Brown and Noah Schnapp, called out the show after completing work on this year’s season.

Elsewhere on Sunday night’s (4 July) of Love Island, Gemma Owen dropped a revelation about her relationship with Luca Bish.

The couple were divided with the return of Casa Amor, a twist that sees the contestants separated from their other halves and put into a separate villa, where they mix with a new load of singles who will undoubtedly stir up trouble.

Emily Ratajkowski has seemingly responded to backlash she faced after sharing photos of herself and her one-year-old son in the bath together with a video of the pair dancing.The model, 31, shared the album of photos of herself and her son Sylvester in the bathtub to Instagram on Friday, where she captioned the photos: “Loml [love of my life].”However, the photos proved to be controversial among Ratajkowski’s followers, with some alleging that the pictures of the one year old were “inappropriate”.“Please protect your baby from creeps! These intimate moments should stay private,” one person commented under the Instagram post,...
CELEBRITIES・7 HOURS AGO
The Independent

Comedian Jayde Adams has said that she’s prepared for judgemental comments when she performs on this year’s series of Strictly Come Dancing.This year, the BBC show returns for its 20th anniversary series, presented once again by Tess Daly and Claudia Winkleman.The show announced its 2022 line-up in full earlier this month, from presenter Helen Skelton to singer-songwriter Fleur East.The partnerships for each celebrity and the professionals were also unveiled during the launch over the weekend. Adams, who is an actor, comedian and podcaster, was announced as part of the line up for this year’s show.In an interview with The...
CELEBRITIES・19 HOURS AGO
Fox News

LONDON, England – Prince Harry faces a life of permanent "exile" with King Charles III plotting to follow the playbook drawn up by the royals when they overcame the crisis triggered by Edward VIII, the king who abdicated in 1936 and was obliged to live the rest of his life outside the U.K.
CELEBRITIES・1 DAY AGO
RadarOnline

King Charles III hasn't shut down the idea of giving Prince Harry's children royal highness status, but he wants something in return. RadarOnline.com has learned Britain's 73-year-old monarch is willing to bestow Harry and Meghan Markle's kids — son Archie, 3, and daughter, Lilibet, 1 — with prince and princess titles but only if he knows he can "trust" the Duke and Duchess of Sussex.
U.K.・3 DAYS AGO

Has someone ordered couple's therapy for the King and Queen?. The royal heirs may need their relationship repaired after a source revealed King Charles III and Queen Consort Camilla had been facing a great deal of marital woes prior to taking over the British throne. Article continues below advertisement. "It's...
RELATIONSHIPS・6 DAYS AGO
Showbiz Cheat Sheet

Former Royal Butler Predicts Prince William Will Someday Be a ‘Compassionate’ Monarch, ‘Not King Because That’s His Job’

According to a former royal butler, Prince William will someday be a monarch who balances compassion, duty, modernity, and tradition.
U.K.・1 DAY AGO
Marie Claire

Every few months, a royal book crashes onto the scene that reveals some of the juiciest behind-the-scenes drama in the House of Windsor. This time around, it's royal reporter Valentine Low who's making waves, with his upcoming opus Courtiers: The Inside Story of the Palace Power Struggles from the Royal Correspondent who Revealed the Bullying Allegations (opens in new tab), which takes a closer look at Prince Harry and Meghan Markle's relationship with their staff while they were working royals.
CELEBRITIES・17 HOURS AGO
The Independent

Celebrities from across the world of music have reacted to the news that Rihanna will headline the Super Bowl next year. On Sunday night (25 September), the singer announced via Instagram that she will be the headline performer at the NFL’s Super Bowl halftime show in February 2023. The...
NFL・21 HOURS AGO

Britney Spears has shared a post contrasting herself with Jennifer Lopez, criticising the way she was medicated while under her now-defunct conservatorship. Between the years 2008 and 2021, Spears’ personal and financial affairs were controlled by a conservatorship agreement, with her father Jamie Spears serving as her conservator for the majority of that time.
CELEBRITIES・17 HOURS AGO
The Independent

The Duke of Sussex was determined to make an impact before Prince George turned 18 as he worried he would become “irrelevant” after that, a new book has claimed.A forthcoming book by The Times’ royal correspondent Valentine Low claims that Prince Harry was frustrated that his advisers “were holding him back” when he wanted to get involved in the same areas as his brother, the Prince of Wales.In an excerpt published in The Times, Low spoke to members of the royal household for his book Courtiers: The Hidden Power Behind The Crown and was reportedly told that Harry held...
CELEBRITIES・1 DAY AGO
The Independent

Scarlett Johansson has revealed how she and husband Colin Jost decided on the name Cosmo for their son.The 37-year-old actor discussed how she and the comedian came up with her child’s name during an interview on The Kelly Clarkson Show on Monday, where she went on to recall why she liked the name.“We just threw a bunch of letters together,” she joked to host Kelly Clarkson. “No, but I just really thought it was so charming and our friends all liked it.”However, the Black Widow star poked fun at the fact that not everyone loved the name Cosmo, as...
CELEBRITIES・5 HOURS AGO
The Independent

Kanye West has seemingly compared his divorce from ex-wife Kim Kardashian to the death of Queen Elizabeth II. On his Instagram Story on Sunday, the 45-year-old rapper, known as “Ye,” appeared to reflect on his past relationship while addressing the Queen’s recent passing on 8 September. “LONDON...
CELEBRITIES・11 HOURS AGO

One of Queen Elizabeth II’s pallbearers kept his role in the late monarch’s funeral so quiet, even his mother did not know he was involved until the last minute.David Sanderson was one of the eight soldiers from the 1st Battalion Grenadier Guards who was selected to carry the Queen’s coffin during the state funeral on Monday (19 September).But his family did not know about his important role in the ceremony until they saw pictures of the rehearsal online.Sanderson’s mother, Carolyn, told MailOnline that she had “no idea” because “it was all private to the army”.It wasn’t until they were...
U.K.・1 DAY AGO
The Independent

Kim Kardashian mocked after struggling to walk up stairs in Dolce & Gabbana dress: ‘Exhausted watching this’

Kim Kardashian has been mocked by fans after struggling to walk up a flight of stairs in her Dolce & Gabbana dress. The 41-year-old reality star attended Milan Fashion Week over the weekend for the debut of her collection, “Ciao Kim,” for Dolce & Gabbana. For the official Dolce & Gabbana afterparty, she wore a floor-length silver sequin dress, which featured criss-cross ties on the sides and front. She completed the look with silver jewellery, a purse, and silver stiletto heels, while her blonde hair was in an updo.
CELEBRITIES・12 HOURS AGO
The Independent

Cameron Diaz has reignited an age-old debate after revealing to friend Drew Barrymore that she’s peed in a swimming pool. The Charlie’s Angels star made the confession while appearing on The Drew Barrymore Show earlier this week. The longtime friends drove around in a car – which Barrymore nicknamed the “Drewber” – as Diaz answered pre-recorded questions sent in from her sister-in-law, Nicole Richie.
CELEBRITIES・10 HOURS AGO
The Independent

Steven Moffat: The BBC will never be safe in the hands of the Government

Former Sherlock and Doctor Who showrunner Steven Moffat has said the BBC “will never be safe in the hands of the government”.The screenwriter and producer, 60, praised the public service broadcaster for its role in “speaking truth to power” during an interview with Radio Times.Moffat has a long-standing relationship with the BBC, having worked with it since the early 1990s on a number of high-profile drama projects.Asked about tensions between the corporation and Government, he said: “Do I trust the BBC in the hands of the government? No, I don’t. The BBC, quite rightly, interrogates everybody.He jokingly added: “If you...
ENTERTAINMENT・5 HOURS AGO
The Independent

A woman who thought she purchased the perfect beach cover-up from Shein received much less than she had bargained for.Tori Walker, 25, ordered a crochet dress from the controversial fast-fashion website to take on holiday to Thailand with her fiancé Ben Nelson, 27.An online listing of the item showed an olive-coloured dress with long tassels that covered the model’s thighs and reached her knees.But Walker, an administrative worker from North Shields, claimed she received a garment that looked “more like a string shopping bag” than a dress.She said she tried the garment on but found that it barely covered...
APPAREL・15 HOURS AGO
The Independent

Priyanka Chopra and Nick Jonas have put their romance on display during the Global Citizen Festival in New York City. On 24 September, Chopra hosted the 10th annual charity event, which brings together musicians, activists, world leaders and philanthropists to take action against extreme poverty across the world. This year, the Global Citizen Festival brought together artists such as Metallica, Charlie Puth, Måneskin, Mariah Carey, Rosalía, and the Jonas Brothers for performances in New York City’s Central Park.
CELEBRITIES・13 HOURS AGO
The Independent

Madonna’s son David Banda has celebrated his 17th birthday with a disco-themed party, for which he wore a glittery suit to match the special occasion.The pop star’s youngest son rang in his birthday while wearing a green sequined suit with matching bell-bottom pants. Under the glittery jacket, he wore a silky black shirt unbuttoned halfway down his chest. David accessorised the look with a layered diamond necklace and silver platform boots.At one point during the evening, the young fashion icon sported a fur coat in the spirit of the 70s theme. One fan even pointed out that, in one...
BEAUTY & FASHION・6 HOURS AGO
The Independent

Good Morning America meteorologist Ginger Zee has clapped back at an online troll who claimed that she looked like a “street walker”, prompting praise from her fans. On Twitter on Friday, a viewer posted a comment criticising ABC News’ chief meteorologist, whose full name is Ginger Renee Colonomos, over her outfit and posture during a recent weather report. “Ginger Zee dresses and poses like a retired stripper turned street walker,” they wrote on Twitter.In response, Zee expressed her amusement over the online “diss” and poked fun at the “storyline” that had been created about her outfit.“I have been missing...
TV & VIDEOS・12 HOURS AGO