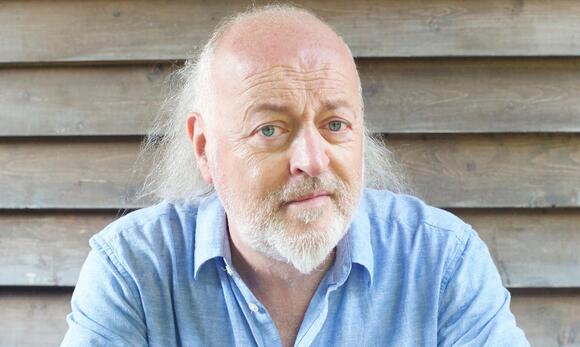 How did you get into comedy?
I grew up in the West Country and there wasn’t much of a comedy scene at the time. On the invite of a friend, I went to London and we saw a comedy gig in Archway that was comically alternative. It was like a sitcom’s version of what alternative comedy would be. It was in an anarchist vegetarian commune called The Earth Exchange and it was vegetarian food at the back and alternative so-called comedy at the front. I saw an act called Otiz Cannelloni who did this surreal meta magic and there were some storytellers, character comedians and John Hegley. He was singing short, intense songs on the mandolin and he had this brilliant stage persona. It was the first time I realised: “That’s what I want to do!” It was just a question of how I could engineer my life so I could do it.

I went back to the West Country and my school friend Toby and I set up a comedy club in Bath. It wasn’t a vegan exchange, that was a bit of a stretch for the West Country in the 80s, but it was great fun. We compered a monthly talent show. New acts would come to perform and there were prizes for whoever the audience liked.

Who inspired you when you were first starting out?
John Hegley was a big influence. The combination of words, pictures, music and songs. That’s something that has formed the core of my own act.

Can you remember a gig so bad, it’s now funny?
I was doing a show in New Zealand years ago and I used to do a song about racial harmony called Hats Off to the Zebras. It was about black and white living together in harmony, and a sendup of Ebony and Ivory. My wife said to me, “Do that song, they’ll love it.” The gig was going great, then I did this song and the gig crashed and burned because I didn’t realise the whole evening was about breaching the racial divide. It was white New Zealanders and the Māori community. It was like I turned up there and gave two fingers up to the whole thing.

How would you describe your current show that you’re taking to the Royal Opera House?
It’s an account of the last couple of years. The first half is a catchup of what happened artistically during lockdown. The long days, the strange obsessions, the creative rabbit holes you go down. The second half is much more about my own personal idea of what normality is. For example, how I dealt with the extra fame of doing Strictly and the spotlight that brings. The whole thing really is about trying to find a way through all of this, in a creative way.

What’s your process for writing material?
Usually I book a little try-out room. Sometimes I take a notepad to gauge the reaction of the story or song in front of a small audience. But this hasn’t been available recently because no venues were open. Instead, I found myself at large venues, sometimes at an arena, trying something out for the first time. Ridiculously, it felt a bit like a high-wire act. I’ve got to confess, I got addicted to it. It’s like skydiving or bungee jumping: There are thousands of people here, I’ve never said this in front of anyone … Here we go!

Any pre-show rituals?
I always go sit in the empty auditorium and visualise the show. I imagine myself in the audience watching the show. Somehow that helps my performance. I imagine what people needed to do to get to the show and their expectations. It’s a way of reminding myself that every show is unique and needs to be as good as it can be.

What’s an important lesson you’ve learned from being a standup?
I think it teaches you a lot of self-reliance. You have to be determined, thick-skinned and be able to roll with the punches. It teaches you to be in charge of your own life because everything is on you. With standup, the benefits are that you feel you earned the good things that come your way, because you write it and travel around performing it. But if it’s not going well, you’re on your own.

Related: Bill Bailey: ‘Strictly’s been extraordinary! I’ve even surprised myself’

Best piece of advice you’ve ever been given?
Bob Mills, who was a standup I worked with when I was starting out, said: “Keep saying funny things.” It’s actually quite profound. Comedians are always asked, “What do you think of this?” “What’s your opinion on fracking?” In the end, we’re here to tell jokes and be funny.

What’s next for you?
A tour of Australia. Touch wood the monkey pox doesn’t put a kibosh on that. I’ve got a film, TV series and more standup stretching off into the future. Who knows?

• Bill Bailey is at the Royal Opera House, London , 11-14 August. His Walk for Sean Lock is raising money for Macmillan Cancer Support.

Bridges plays an ex-CIA agent who has been in hiding for decades. Now, he’s paranoid old enemies are out to get him. Are they? Of course!
TV & VIDEOS・1 DAY AGO
The Guardian

Denmark’s Queen Margrethe, Europe’s only reigning queen and the continent’s longest serving monarch, has stripped four of her eight grandchildren of their titles, the palace announced. The official reason was to allow the four children of her youngest son, Prince Joachim, to live more normal lives, and...
EUROPE・22 HOURS AGO
The Guardian

Royal fans are talking about a quick moment where Camilla, Queen Consort, seemingly lost her temper with Prince William and Kate Middleton's children. The moment happened during Queen Elizabeth II's state funeral on Monday, September 19th. As members of the Royal Family gathered outside of Wellington Arch to watch as...
CELEBRITIES・9 DAYS AGO

According to MEAWW King Charles has serious reservations about Meghan Markle resuming her Archetypes Podcast for Spotify. The next episode is scheduled for Tuesday, October 4th, and will feature actress and comedian Margaret Cho who will talk about Asian-American tropes in the entertainment industry.
19 HOURS AGO
The Guardian

Seth Meyers on Donald Trump: ‘What is wrong with you?’

Seth Meyers opened with the escalation of threats from Vladimir Putin after a series of setbacks in his invasion of Ukraine. Putin vowed that Russia will use “all means” at its disposal to continue the occupation of Ukraine, adding: “I am not bluffing.”. “OK, the problem with...
POTUS・2 DAYS AGO
The Guardian

Swedish seismologists says blasts detected near gas pipelines, which are leaking into Baltic sea
POLITICS・2 DAYS AGO
The Guardian

It may never be possible to determine definitively whether Monday’s underwater explosions at the two Nord Stream gas pipelines were the work of Russian sabotage, but it is certainly the way to bet. The incidents took place close to – but just outside – the 12-mile territorial waters of...
ECONOMY・2 DAYS AGO
The Guardian

The extent of deaths and injuries remain uncertain as rescue workers are only starting to respond to calls as treacherous conditions abate Report: Hurricane Ian hits with ‘catastrophic’ wind and rain
FLORIDA STATE・4 MINUTES AGO
The Guardian

The renowned US big-mountain skier Hilaree Nelson has gone missing on a trek in the Himalayas after apparently falling into a 2,000ft crevasse. Nelson and her partner, Jim Morrison, had scaled the 26,781ft peak of Manaslu mountain on Monday morning. Jiban Ghimire of Shangri-La Nepal Treks, which organised the expedition, told Outside Magazine that the pair reached the summit at 11:30am local time.
PUBLIC SAFETY・2 DAYS AGO
The Guardian

Basketball’s world governing body has opened an investigation after players on the Mali women’s team were filmed physically fighting one another following their World Cup loss to Serbia in Sydney. The scuffle between Salimatou Kourouma and Kamite Elisabeth Dabou broke out during a post-match interview with Serbia’s Sasa...
WORLD・2 DAYS AGO

In a meeting supposedly about campaign strategy in the 2020 election, Donald Trump implied his son-in-law and senior adviser, Jared Kushner, might be brutally attacked, even raped, should he ever go camping. “Ivanka wants to rent one of those big RVs,” Trump told bemused aides, according to a new book...
POTUS・15 HOURS AGO
The Guardian

Alexandra, 37, a lawyer from Moscow, appeared to almost astonish herself as she said it. Perhaps it was the first time she had, out loud. “We have left our house, our car, our lives – everything.”. Looking down at the top of the blond head of her small...
POLITICS・2 DAYS AGO
The Guardian

At first, the killing of Mahsa Amini by the morality police triggered protests only among a minority – but anger with the regime soon spread
PROTESTS・2 DAYS AGO
The Guardian

Denver Riggleman tells 60 Minutes that texts from Mark Meadows amounted to a ‘roadmap to an attempted coup’
U.S. POLITICS・3 DAYS AGO
The Guardian

In his first White House meeting with a major foreign leader, Donald Trump asked Theresa May: “Why isn’t Boris Johnson the prime minister? Didn’t he want the job?”. At the time, the notoriously ambitious Johnson was foreign secretary. He became prime minister two years later, in 2019, after May was forced to resign.
POTUS・15 HOURS AGO