A rustic private island in Maine is on the market, but the owner will only sell to someone willing to stay overnight—despite perilous weather 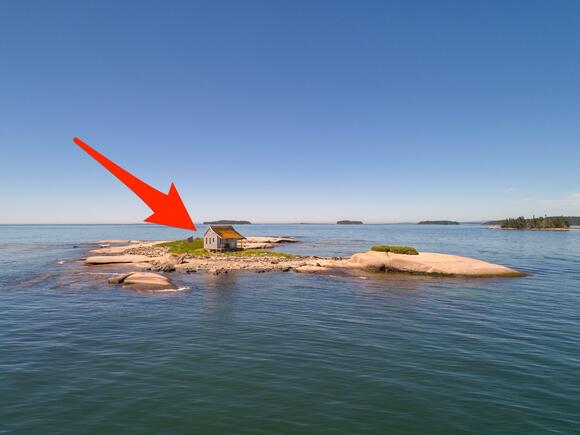 Up for a private island on the northeastern coast of the US?

Ducks Ledges Island is a 1.5-acre landmass currently on the market in Wohoa Bay, Maine. The price: an attainable $339,000.

Billy Milliken, the island's owner and real estate agent in charge of the sale with Bold Coast Properties , told Insider that the island offers a lot to a new caretaker. Even though it feels remote when you're on the island, it is just a 10-minute boat ride from Jonesport, Maine.

"It's out there far enough that you're away from any noises and lights," said Milliken, who has owned the island since 2007. "There's a very dark sky out there so nighttime is beautiful."

However, to qualify as a potential buyer, Miliken says that interested parties need to stay a night on the island.

Being able to afford the price tag is one thing. But Milliken has an additional stipulation: Anyone interested in Ducks Island needs to be prepared to spend a night on the island and win over Milliken.

"I'm sticking to my plan in that to qualify as a buyer you've got to stay," he said. His reasoning is that he wants the new owner to see the value in the island's natural landscape, but also be willing to deal with its quirks.

Two parties have already completed the overnight request and three more are scheduled to visit in the coming days, he said. If more than one potential buyer is qualified, Milliken said that the deciding factor is his instinct.

The island comes with a quaint 540-square-foot cottage featuring unobstructed views of the surrounding waters.

When Milliken bought the island, the original property had fallen into disrepair. "We tore it down and built a brand new one," he said of the existing cabin.

Given today's building laws in proximity to water, it's a rare find, Milliken said. Today it would be more challenging to erect the same structure on Duck Ledges.

"If you find a little island like Duck Ledges, you can't necessarily build a cottage on it," he said. Duck Ledges slips by because the island's structure predates new zoning laws, allowing for an existing non-conforming structure to stand legally.

What also makes Duck Ledges so unique is the lack of trees on the island, giving unobstructed views of the water. "You have a front row seat," Milliken added.

The cottage sleep up to four people.

The cabin is cozy, but will comfortably fit up to four people. There are two beds in the loft and, currently, Milliken said he keeps air mattresses for additional overnight guests.

Throughout the years, Milliken has shared the island with his family and close friends, who he said tend to make day trips rather than stay overnight.

The cottage is 20 feet from the edge of the water, but Milliken said it can withstand flooding.

The downside to being so close to the water is the risk of flooding during storms.

Milliken explained that the majority of bad weather takes place between October and May. He typically stays away from the island at that time because it's unfit for "man or beast," he said.

But despite a long stretch away from the property, the cabin remains intact. It was built with the rugged environment in mind.

"There's been three different times when the storm surges have come up to the cottage, and maybe under the cottage to a degree," Milliken said. "But, it's elevated. It's never, ever damaged the structure or the flooring."

Milliken said he's only ever used the space as a summertime getaway. Wintertime, he added, is no joke.

For Milliken, the beauty of the island comes during the summer when "you can very much experience the ocean and be part of it," he said. The water provides a cooling effect during warm weather. In fact, during one particularly hot summer, he remembers coming out to the island.

"It was just such a relief, physical relief," he said of the coastal breeze. "I slept outside in the hammock. It was the best night's sleep I ever had."

Wintertime conditions on the island, however, consist of ice, snow, and storms, which would be a challenge for anyone looking to live there full-time. Milliken admits it's not beyond the realm of possibility, though.

"I had a friend stay there during a storm in the wintertime," Milliken said, noting that the friend was curious to see what it would be like to live off what the island could provide, including fish, clams, and mussels. "He really roughed it. He was ready to come home after three days."

Modern comforts not afforded to the new owner of Ducks Ledges include running water and heat. If someone is thinking of making it a year-round residence, that's a challenge, Milliken said.

For the bathroom, guests use the outhouse, located a short distance from the cottage.

Milliken explained that, for him, Ducks Island has always been a place to visit during the day. His main residence is nearby on the mainland. "It's tempting to come home and take a shower," he added.

But a massive perk of the island is how "unspoiled" and rich with wildlife it is, Milliken said.

Wildlife on the island includes lobster, sea birds, eagles, and seals, who give birth to pups around the island, Milliken said.

When he finds live seal pups, he calls the Marine Mammal Rescue hotline to rescue them.

"It's so unspoiled there," Milliken said. "You experience nature—it hasn't changed."

To maintain the integrity the island and its wildlife, Milliken said he'll only sell to someone who feels the same way about keeping it a "special place."

Milliken is upholding a long-standing vision for the island. He said that the owners before him refused to sell the island to an interested party because they wanted to hunt the wildlife on the island.

After spending a decade on Duck Ledges himself, he understands why the previous owners were so protective.

"In our lives, we're busy, and there's so many distractions, but, when you're out on that island, you really feel small," Milliken said. "It's very healthy to be there alone where you can really listen to yourself. You're a guest of nature when you're there."

"The longer I own the island," he added, "I understand even more that it is a special place."

this is like something off a movie. someone dies and goes to the will reading. "to my nephew I leave my summer home, OOONLY on the condition he stays one night" turns out something is VERY wrong with the place lol

I would do it just to see the seal's. Glad you and the 1st owner kept it pure and saved the wild life. BEAUTIFUL CABIN and the view too.

I love this stipulation. I only wish I could buy it. I love Maine. It appears so raw in places. It has an untouched purity in and about the bays.

A mansion on a private island in Minnesota is on the market for $6.6 million, and most of it can be controlled by iPad — check it out

"It's easy to get to shore, but you're half a mile at minimum away from anybody else's place," Nathan Landucci, the owner and listing agent, said.
WHITE BEAR TOWNSHIP, MN・2 DAYS AGO
Insider

A narrow house in Washington, DC, is on the market for the first time since 1985, for $3.5 million. The architect turned the original home on the lot into its basement — check it out.

The architect Djahanguir Darvish designed and built a narrow house in Washington, DC, for his family. He's now listing the home for $3.5 million.
WASHINGTON, DC・1 DAY AGO
Daily Mail

An abandoned Boeing 737 has appeared out of no-where parked in a field in Bali, with many travellers scratching their heads about where it came from. The large plane sits in a limestone quarry near the Raya Nusa Dua Selatan Highway, not far from the Pandawa beach - a tourist hub.
LIFESTYLE・3 DAYS AGO
Insider

I was born and raised in Charleston. Here are the 10 biggest mistakes I see tourists make when they visit.

We talked to interior designers about what makes a great couch. Here's where you can find the best couches and sofas, no matter your budget.
RETAIL・2 DAYS AGO
Insider

I quit van life after 4 years and moved into a house. Here's why I gave up living on the road and don't regret it.

By the time I moved into my home in Moab, Utah, I was tired of hunting for Wi-Fi, searching for parking spaces, and spending so much time alone.
MOAB, UT・1 DAY AGO
Insider

More than 4,000 beagles raised to be used in US drug trials were rescued from a breeding facility in Virginia

The company that owned the facility was sued by the DOJ in May citing instances of animal cruelty, including some dogs being killed instead of treated.
CHINO HILLS, CA・18 HOURS AGO
Insider

The 5 best cooling mattresses for hot sleepers, based on our testing of 66 mattresses

The 9 best mattress deals in August, with big discounts on Casper, Leesa, and Sleep Number

Mattress brands like Purple, Bear, Helix, and Saatva are running big sales in August. Here are the best mattress deals worth shopping for.
LIFESTYLE・20 HOURS AGO
Insider

TikTokers are gaining millions of views with meme videos that explain how to use the "angel shot" code to alert staff of a safety threat in a bar.
BEHIND VIRAL VIDEOS・2 DAYS AGO