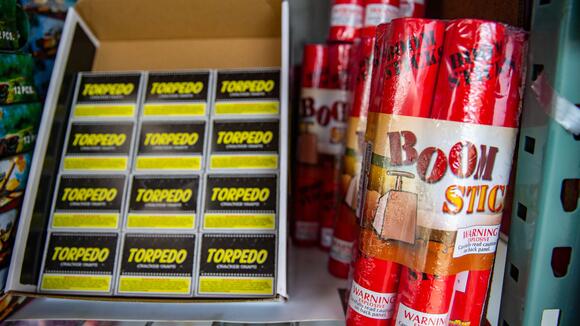 Few things capture the obnoxiousness of a certain "love it or leave it" brand of patriotism like Iowa's permissive approach toward personal fireworks displays.

Since state lawmakers reversed a statewide ban on fireworks sales in 2017, we've been through five summers where city dwellers who stay home have no choice but to endure nights and nights of loud bangs leading up to the Fourth of July — and that annoyance is if they're lucky.

It's more than an inconvenience to veterans for whom explosions can trigger post-traumatic stress disorder symptoms. To families whose small children are terrified (or even just disturbed from sleep, presaging a week or more of trying to restore a carefully cultivated nighttime routine). To pet owners who can't help animals understand what's happening.

It's exasperating enough that those intrusions on other Iowans' well-being aren't viewed as justification for leaving fireworks solely in the hands of professionals. But we haven't even broached the physical harms.

In 2020, smoke stayed trapped over Des Moines well into July 5, exceeding national fine particle standards and prompting warnings for children and people with respiratory conditions to stay inside. Finally, there are the injuries. Every year, University of Iowa researchers trumpet the figures — that Iowa's largest trauma centers treat twice as many serious injuries from fireworks each year as they did before the law changed, that the rate of injuries to children went up even further, and that amputations have become more common.

Maybe the medical professionals need a different promotion strategy. Perhaps a novelty firework depicting a handless arm? Nationwide, at least 18 people died from fireworks injuries in 2020, according to the Consumer Product Safety Commission, at least two-thirds of them after they misused the explosives.

Police citations for ignoring bans on fireworks use are disappointingly rare, but even so, public safety officials don't seem to be fully on board with Iowa's near free-for-all. A news release sent Thursday afternoon and attributed to the Iowa Department of Natural Resources, Iowa Department of Public Health and the State Fire Marshal's Office tries to balance enthusiasm with reality: "As much as we love fireworks, drifting smoke can cause breathing problems for some and drought conditions may pose additional risks this year."

The release goes on to share four safety tips, under the headings "Keep sensitive people upwind," "Protect family and friends from burns," "Don’t risk a fire," and "Store and dispose of fireworks safely."

Quite a bit to keep track of for such an unnecessary activity that is a nuisance to so many. (And people don't follow the directions; last year, a Des Moines splash pool had to stay closed for a day so debris could be cleaned up.)

Republicans in the state Legislature shrug at these complaints, as though they were impossible to hear during a fireworks finale. Instead, this spring, they again retaliated against cities and counties that have tried to be responsible by banning personal fireworks use and limiting where they can be sold. Cities including Des Moines, Cedar Rapids, Iowa City and West Des Moines saw their zoning restrictions on fireworks vendors invalidated.

To call any of this a victory for freedom is to restrict the definition of freedom to a couple of specific niches: the freedom of individuals to do what they want regardless of who they hurt, and the freedom to sell anything people will buy regardless of the public safety consequences.

Happy Fourth of July. Know where to find your headphones and face masks. Be ready to dial 911.

— Lucas Grundmeier, on behalf of the Register editorial board

I have a 3 year old and she sleeps through our NEIGHBORS lighting them off so dont go saying "those with small children"... Not ALL small children are the same..

And this article is exactly what is wrong with people now adays! we are Americans! Fireworks on the 4th go hand in hand. yall act like just because Fireworks were illegal that tons of Iowans would just go over the border and bring em back. Obviously there's going to be more emergency room calls but ya once again this is AMERICA!!! Deal with it!

The Kentucky state legislature overrode Gov. Andy Beshear’s veto of a bill banning abortion after 15 weeks along with several other abortion restrictions.
2022-04-14

An Ohio man charged with storming the U.S. Capitol and stealing a coat rack testified that he joined thousands of protesters in ransacking the building last year on what he thought were orders from the president, Donald Trump. Dustin Byron Thompson, 38, of Columbus, Ohio, said Wednesday he took to...
2022-04-14
The Hill

Pfizer and BioNTech said Thursday that a third dose of their COVID-19 vaccine in children ages 5 to 11 produced a “high” immune response, and that they will apply for authorization for a booster dose in the age group soon. Pfizer said in a news release that a...
2022-04-14
The Hill

Donald Trump’s former White House chief of staff Mark Meadows has been removed from North Carolina’s voter rolls, according to the State Board of Elections. Meadows is also being investigated for allegations of voter fraud, the State Bureau of Investigation said. The decision to remove the former North...
2022-04-13

#Legislature#Explosions#Firework#Permissive#Iowans#University Of Iowa
The Associated Press