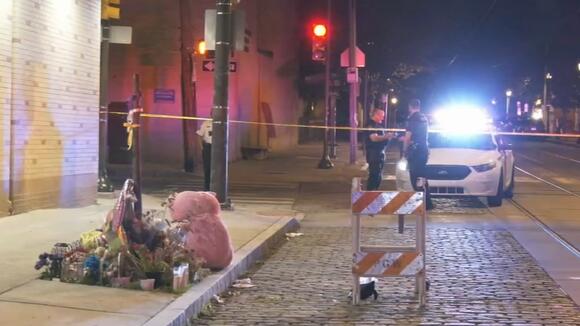 Police are looking for a hit-and-run driver who killed a woman in Germantown. It happened around midnight Sunday on Germantown Avenue near Coulter Street, the same spot where another woman was killed just a few weeks ago. According to investigators, a woman in her 50s was crossing the street when a speeding vehicle, described as a white SUV, hit her and drove off. The woman's shoes landed next to a memorial for 21-year-old Dia Lee, who was killed here on June 21. A suspect in that case, identified as Quadera Parrish, has been arrested. Police say she turned herself in after investigators located the Tesla she was allegedly driving at the time of the collision. The name of the woman who was killed on Sunday has not been released. No arrests have been made in her death.

When people are sent to jail for certain crimes the sentence should be with labor for certain crimes, they should have to dig holes and fill them back up from 7 AM until 7 PM seven days a week until their sentence is over no watching TV just a shower and back to your cell, and the next day the same thing over and over into your sentence is done or you can choose to take a pill at any time that will kill you within three days slowly and painful. Make going to jail not worth it. It’s to EZ in there.🤷‍♂️

😞🕯🙏🏽🙏🏽🙏🏽 May She Rest In Peace and Condolence To Her Family. GOD help those who may have witnessed this Hit and Run or whatever they can do based on any video available to get this assailant to justice help the 🚔🚔🚔 police as well

This what you going to see, more often bad news people drving like wild cats, and you can't even drive with a cigarette in your hand and looking to the side, there goes the rushing, and red light eating, hitting others as well. Im tired of people

The violence continues after an 18-year-old was shot in North Philadelphia overnight.
PHILADELPHIA, PA・1 HOUR AGO
6abc Action News

Action News has confirmed that at one person has died in the wreck.
DELAWARE COUNTY, PA・2 HOURS AGO

The investigation began back on August 6 when Washington Township officers were called to a dispute inside an apartment on Woodmont Circle.
GLOUCESTER COUNTY, NJ・14 HOURS AGO
6abc Action News

2 killed in fiery crash on I-95 in Newark, Delaware

The 37-year-old male driver of the BMW and his 27-year-old male passenger were pinned inside the vehicle, police said.
NEWARK, DE・22 HOURS AGO
6abc Action News

A judge has reinstated third-degree murder charges against the woman accused of killing two Pennsylvania state troopers and a pedestrian in a crash earlier this year on Interstate 95.
EAGLEVILLE, PA・2 DAYS AGO

Police say the bus, with 22 passengers on board, crashed after the driver lost control.
PHILADELPHIA, PA・2 DAYS AGO
6abc Action News

"The device is designed to detain a person without harm who is a threat to themselves, the officer or the community," said Chief David Splain.
NETHER PROVIDENCE TOWNSHIP, PA・17 HOURS AGO