Police: Body found shot and tied up inside trunk of burned vehicle in Fox Chase 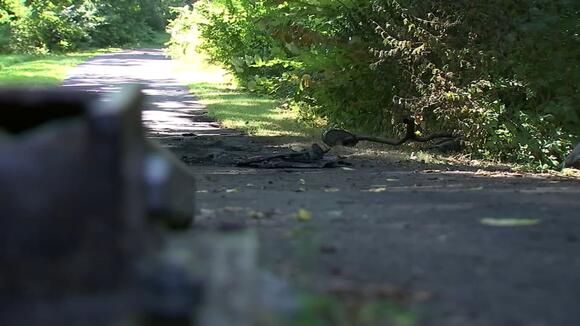 Philadelphia police are investigating after a body was found shot and tied up inside the trunk of a burned vehicle in Fox Chase. It happened late Saturday night on the 8500 block of Verree Road, just south of the Penny Pack Creek. The Philadelphia Fire Department responded to calls for a car fire at that location, and quickly worked to put out the blaze. According to Chief Inspector D.F. Pace, an accelerant was used to set the fire. Once the fire was extinguished, the fire department discovered a body in the back of the trunk. Police were called to the scene to investigate. Officials have determined that the body appeared to be a young adult male, likely in their late teens or early twenties. Police say the body was bound at the hands and head and also sustained a bullet wound to the head. According to preliminary forensic evidence, police believe the male was shot just before the car was set ablaze. Police told Action News that the vehicle was registered to an address in Northeast Philadelphia, but they have been unsuccessful at contacting that person. Homicide investigators are now looking for the person or persons responsible for this shooting homicide. Anyone with any information is encouraged to contact the Philadelphia Police Department.

This is why I don’t go to Philadelphia anyone perhaps if the Mayor would hire a real DA maybe we could get to the bottom of some of the crime that’s going on this man shouldn’t have been BBQ like this it’s sad and I remember when you wouldn’t set foot in Northeast Philadelphia cops was doing they job maybe some over did they job but we had order in the community now.. expect this will definitely spill into Jenkintown and other surrounding areas because no one is given real jail time you keep allowing people to hurt others I bet when they catch the guy we are going to hear this guy has a police record the size of a Las Vegas electric bill.

Im willing to bet the person inside the car is the car owner. Car wasn’t reported stolen Reads like a mob hitWhatever this person was into seems it was not legal and he entangled himself with the wrong people

I'm sorry but that's actually backwards....Krasner is the 1 who won't prosecute anyone even repeat violent offenders and its the cops who have had restrictions set on them

A juvenile was killed and a pregnant woman injured after violent night in Philadelphia.
PHILADELPHIA, PA・13 MINUTES AGO
6abc Action News

The investigation began back on August 6 when Washington Township officers were called to a dispute inside an apartment on Woodmont Circle.
GLOUCESTER COUNTY, NJ・15 HOURS AGO
6abc Action News

Action News has confirmed that at one person has died in the wreck.
DELAWARE COUNTY, PA・3 HOURS AGO

"The device is designed to detain a person without harm who is a threat to themselves, the officer or the community," said Chief David Splain.
NETHER PROVIDENCE TOWNSHIP, PA・18 HOURS AGO
6abc Action News

Joelill Foy, 26, was shot and killed outside his home on the 1800 block of Sigel Street back on July 27.
PHILADELPHIA, PA・2 DAYS AGO

At least 20 shots were fired during a double shooting in West Philadelphia.
PHILADELPHIA, PA・4 DAYS AGO
6abc Action News

A Philadelphia police officer has been arrested and charged for threatening and assaulting a former partner and mother of his four children, according to the District Attorney's Office.
PHILADELPHIA, PA・2 DAYS AGO
6abc Action News

Police say a 23-year-old man was shot in the chest, leg and foot at the McVeigh Playground basketball court.
PHILADELPHIA, PA・3 DAYS AGO