The 2022 NBA Summer League begins this week and hundreds of players will be looking to make a good impression on their respective organizations. Among those young prospects will be three former Virginia men's basketball players: Jay Huff, Trey Murphy, and Sam Hauser.

All three of these former Cavaliers left UVA for the NBA after the 2020-2021 season, with graduating seniors Jay Huff and Sam Hauser signing with teams as undrafted free agents and Trey Murphy getting selected with the 17th overall pick in the first round of the 2021 NBA Draft by the New Orleans Pelicans.

Huff appeared in just four games for the Los Angeles Lakers last season and has yet to record his first-career basket. He played in eight games for the South Bay Lakers in the G League and averaged 10.0 points, 7.0 rebounds, and 2.3 blocks per game while shooting 58.3% from the field. With his 7'1" frame and his abilities as a dunker and a rim protector, a strong performance playing for the Lakers in the NBA Summer League could land Huff a more substantial role on an NBA team next season.

Trey Murphy slowly developed during his rookie season into a meaningful contributor for the New Orleans Pelicans down the stretch. A breakout game in which he knocked down seven three-pointers and scored a career-high 32 points in a victory against the Hornets on March 11th thrusted Murphy into the team's crunch time lineup in the final weeks of the season. In a do-or-die elimination game against the Los Angeles Clippers in the NBA Play-In Tournament, Murphy hit four threes and scored 14 points in the second half to lead the Pelicans to the win, securing a berth in the NBA Playoffs. 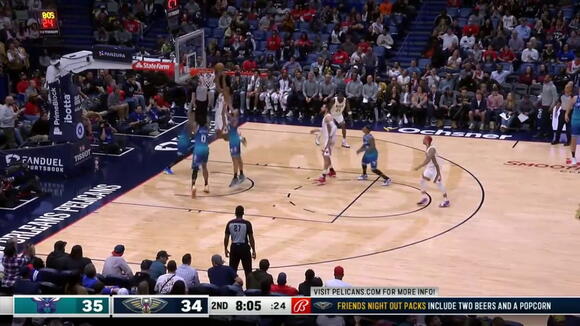 In 62 appearances, Murphy averaged 5.4 points and 2.4 rebounds and shot 39.4% from the floor and 38.2% from downtown. As one part of New Orleans' stellar trio of rookies from last season - along with Herb Jones and Jose Alvarado - Murphy's spot on the Pelicans' roster for next season is essentially secure, but playing in the Summer League will give him an opportunity to get a great deal of playing time and valuable experience as the focal point of the Summer League team.

As of the posting of this article, it is not absolutely certain that Sam Hauser will play in the NBA Summer League for the Boston Celtics. He is currently a restricted free agent after the Celtics declined their team option on his contract earlier this week. The expectation is that the organization will sign Hauser to a long-term deal in the coming days and he will still participate in the Summer League. That is especially likely considering the Celtics cleared away a number of players who might have otherwise played for the team in the Summer League as part of the trade package used to land former Virginia basketball star Malcolm Brogdon from the Indiana Pacers.

Hauser played in 26 games for the Celtics last season, averaging 2.5 points and 1.1 rebounds per game and shooting 43.2% from three and and 46.0% from the field. His ability to shoot the three leads many to believe that he could play a valuable role off of Boston's bench next season. A good showing in Vegas over the next two weeks would certainly help.

Report: Nets wanted both Tatum and Brown for Kevin Durant

According to the Boston Globe, the Nets initially sought both Jayson Tatum and Jaylen Brown from the Celtics in trade talks for Kevin Durant.
BROOKLYN, NY・13 MINUTES AGO
Cavaliers Now

Kim Kirschnick will pass the torch to Julie Caruccio, who will ride horseback to lead the Cavaliers onto the field this season at Scott Stadium
CHARLOTTESVILLE, VA・17 HOURS AGO
Cavaliers Now

Where does UVA stand with its remaining targets in the recruiting class of 2023?
CHARLOTTESVILLE, VA・1 DAY AGO