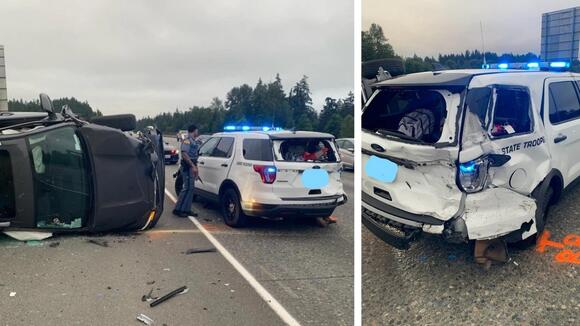 At about 5 a.m., a state trooper had just cleared a traffic stop and was sitting on the right shoulder of Interstate 5, near 320th Street in Federal Way, when the woman struck his vehicle.

The trooper’s car was completely smashed and the woman’s car came to rest on its side.

The woman was arrested for DUI following the collision.

Both suffered minor injuries in the crash.

Why, take the chance of driving when you're drunk? not worth the expense, insurance premium rate goes up, you've got yourself a record on file, most likely will be sued!!!!

Good thing the state patrol warned us about fireworks, because the roads aren't dangerous at all. Glad the trooper was ok

I'm confused how a car parked on the right shoulder gets hit on the side furthest away from the travel lanes. Was it a really wide shoulder and the lady tried passing him on the right?

FEDERAL WAY, Wash. — Another road rage incident in western Washington turned deadly on Monday in Federal Way. It happened in the area of 8th Avenue South and South 320th. “It was very heartbreaking for everybody involved,” Inna Grib, a witness, said. Another woman who did not want to be identified said two men were fighting in the street after their cars collided.
FEDERAL WAY, WA・2 DAYS AGO
KIRO 7 Seattle

The woman whom police said ran a red light, causing a crash that killed several people, has been charged. The Los Angeles County District Attorney announced Monday that Nicole Lorraine Linton has been charged with six counts of murder and five counts of vehicular manslaughter with gross negligence, The Associated Press reported.
LOS ANGELES, CA・1 DAY AGO
KIRO 7 Seattle

NORTH WHITEHALL TOWNSHIP, Pa. — A Pennsylvania teenager died Tuesday after he was pulled into a woodchipper, authorities said. Isiah Bedocs, 17, of Coplay, was working for a commercial tree company when a piece of debris he was placing into the woodchipper snagged his clothing and partially pulled him into the commercial-grade machine, WCAU-TV reported.
LEHIGH COUNTY, PA・8 HOURS AGO

Soldier's assault suit against officers can proceed to trial

NORFOLK, Va. — (AP) — A U.S. Army lieutenant who was pepper-sprayed, struck and handcuffed during a traffic stop in Virginia can present his claims of false imprisonment and assault and battery to a jury, a federal judge has ruled. But the summary judgment Tuesday said federal immunity...
WINDSOR, VA・11 HOURS AGO
Insider

Kiely Rodni, 16, was last seen at a party near a campground in Truckee, California, early Saturday morning.
TRUCKEE, CA・2 DAYS AGO
KIRO 7 Seattle

Pierce and South King Counties were hit hardest by an intense lightning storm Wednesday. The system brought hundreds of lightning strikes to Western Washington. Just after 9:30 a.m., lightning struck the Twin Lakes neighborhood in Federal Way. “I was in a meeting, heard a loud explosion and the house shook...
FEDERAL WAY, WA・3 HOURS AGO
KIRO 7 Seattle

ALBANY, N.Y. — A New York woman pleaded guilty to stealing more than $240,000 in pension benefits issued to her deceased mother, prosecutors said Tuesday. According to a news release from State Attorney Letitia James, Cynthia Rozzell, of Hempstead, pleaded guilty in Albany County Court to second-degree grand larceny. She also must make restitution for the $240,000 she collected between May 2014 and May 2020, the release stated.
HEMPSTEAD, NY・2 HOURS AGO

GRANGER, Ind. — (AP) — The funeral for Indiana Republican U.S. Rep. Jackie Walorski will be held Thursday in her home state of Indiana, where she and three other people were killed in a head-on highway crash. The funeral is scheduled to start at 11 a.m. at Granger...
INDIANA STATE・1 HOUR AGO
KIRO 7 Seattle

COLUMBUS, Ohio — (AP) — An Ohio man is in custody after being accused of sending about three-dozen feces-filled letters to lawmakers around the country, including Ohio's 25 Republican state senators in early July. Police arrested Richard Steinle, a 77-year-old from Mogadore, Ohio, and former Portage County Common...
COLUMBUS, OH・2 DAYS AGO
KIRO 7 Seattle

NATCHEZ, Miss. — A Mississippi man has broken a 1997 record for the state’s heaviest catfish. Christopher Halley caught a 104-pound blue catfish Tuesday using a trotline on the Mississippi River near Natchez. The fish is larger than the trophy record blue catfish of 101 pounds caught by the team of Freddie Parker and Brad Smith in 1997.
MISSISSIPPI STATE・12 HOURS AGO
KIRO 7 Seattle

Hundreds still without power after morning thunderstorms across Puget Sound

Wednesday morning’s rain showers and thunderstorms veered closer to coastal areas and coastal waters and brought multiple power outages to areas around the Puget Sound. According to Tacoma Public Utilities, by 2 p.m. around 500 customers were without power, after peaking at 10,000 customers earlier today. The heaviest-hit appear to be areas east and north of Tacoma.
TACOMA, WA・10 HOURS AGO

The U.S. Department of Transportation announced Wednesday that its Federal Highway Administration awarded the Washington State Department of Transportation’s Ferries Division a $5.1 million grant for a traveler information system aimed at enhancing “service reliability and customer experience,” according to a news release. The announcement comes just...
WASHINGTON STATE・8 HOURS AGO
KIRO 7 Seattle

RALEIGH, N.C. — (AP) — The campaign committee for North Carolina Attorney General Josh Stein, facing trouble for a TV ad aired against a rival in 2020, plans to ask a federal court to block enforcement of a state law making it illegal to knowingly circulate false reports to damage a candidate's election chances.
POLITICS・6 HOURS AGO
KIRO 7 Seattle

ATLANTA — (AP) — Prosecutors in Atlanta said they need a special grand jury to hear from U.S. Sen. Lindsey Graham because he may be able to provide insight into the extent of any coordinated efforts to influence the results of the 2020 general election in Georgia. Fulton...
GEORGIA STATE・7 HOURS AGO
KIRO 7 Seattle

KIAWAH ISLAND, S.C. — (AP) — President Joe Biden arrived in South Carolina on Wednesday to begin what is expected to be at least a seven-day vacation with members of his family. The first couple was planning to be in Kiawah Island, noted for its private beach and...
KIAWAH ISLAND, SC・10 HOURS AGO
KIRO 7 Seattle

Research that analyzed social media posts finds that hateful references to gays, lesbians and other LGBTQ people surged online after Florida passed a law that bars instruction on sexual orientation and gender identity in kindergarten through third grade. References to pedophiles and " grooming " rose by more than 400...
FLORIDA STATE・10 HOURS AGO
KIRO 7 Seattle

The case of a Nebraska woman charged with helping her teenage daughter end her pregnancy after investigators obtained Facebook messages between the two has raised fresh concerns about data privacy in the post-Roe world. Since before the U.S. Supreme Court overturned Roe v. Wade in June, Big Tech companies that...
NEBRASKA STATE・5 HOURS AGO