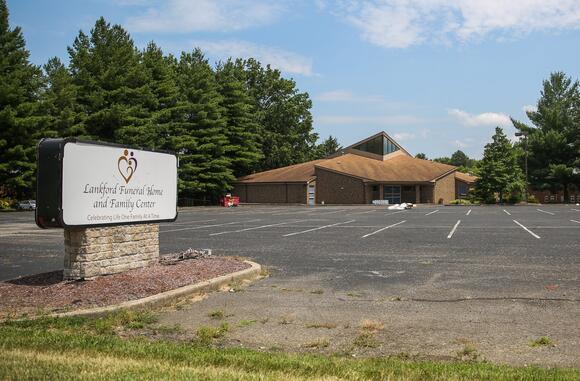 Police in Southern Indiana are investigating after more than 30 bodies, some decomposing, were found over the weekend at a funeral home in Jeffersonville.

Jeffersonville Police responded to the scene Friday night at Lankford Funeral Home and Family Center, according to a statement from Maj. Isaac Parker.

The department worked through the night and into the morning, he said, and located 31 bodies, "some of which were in the advanced stages of decomposition," along with the post-cremation remains of 16 other people.

The Clark County Coroner's Office has taken custody of all decedents, Parker's release said, and is working with the police department to identify the remains. Anyone who had recently worked with Lankford Funeral Home is asked to reach out to the coroner's office at 812-285-6282.

Police were informed by another agency last week about the funeral home, Parker told The Courier Journal in a brief interview Saturday.

He would not confirm whether any arrests had taken place, noting the Clark County Prosecutor's Office is "aware of the situation" and is working with police on the case. Parker also would not confirm how many employees worked at the funeral home, or discuss conditions at the facility.

Some bodies, Parker said Saturday, had been stored at the funeral home since March.

"We understand that this is going to be a situation where we're really going to need the assistance of these families," Parker added. "I'm sorry that they've already suffered a loss and now they're dealing with this situation. We ask anybody that has information to please reach out to us."

Jeffersonville Police's detective division can be reached at 812-285-6535, according to Parker's release.

On Lankford Funeral Home's staff directory , Randy Lankford is listed as the facility's owner, director and embalmer. An email seeking comment Saturday was not immediately returned, and the establishment's website and Facebook page appeared to have been taken off the web as of Tues

Lankford Funeral Home is in the 3100 block of Middle Road in Jeffersonville, which is just across the Ohio River from Louisville. Phone calls to the facility on Saturday directed callers to a voicemail message with instructions on how to contact the Clark County Coroner's Office.

Reporter Eleanor McCrary contributed. Lucas Aulbach can be reached at laulbach@courier-journal.com, 502-582-4649 or on Twitter @LucasAulbach .

some parent out there knows who you are and it is your responsibility to turn your self in. Don't condemn your self from the gifts in Heaven!