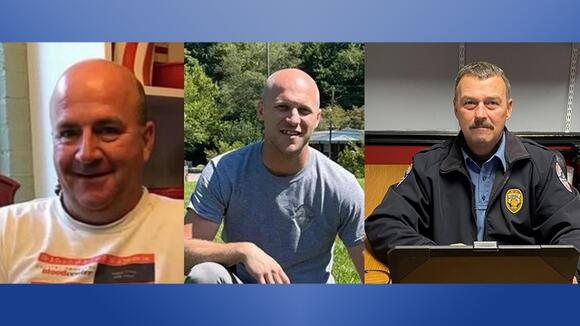 UPDATE: (2:30 P.M. July 3, 2022): According to Floyd County Judge-Executive Robby Williams one sheriff’s deputy and the emergency management director remain hospitalized. He adds that along with those wounded by gunfire, several other officers were treated for glass, shrapnel and other injuries.

The Floyd County Sheriff’s office has identified Constable Gary Wolfe, Floyd County Deputy Darrin Lawson and Floyd County Emergency Management Director Joe Reynolds as three of the individuals injured in the shootout. One of the injured still has not been publicly identified.

KSP has now identified the K-9 deputy who died Thursday night as the Floyd County Sheriff’s Office K-9 Drago. Drago was a Belgian Malinois who specialized in drug detection. He had worked with the FCSO for six years.

The KSP Petry had worked in law enforcement for 31 years, serving two years with the Floyd County Sheriff’s Office, 15 years with the KSP and 14 years with the Prestonsburg Police Department. Frasure had served the PPD since 1983, a 39-year career, and Chaffins joined the PPD in 2019. In a post announcing Chaffins’ End of Watch, the PPD says Chaffins also served as an EMT and firefighter. Prestonsburg Mayor Les Stapleton also confirmed Chaffins was a member of the Army National Guard.

“We have lost a true leader, an excellent officer, a wonderful person and our beloved friend. The FCSO will never be the same. Our hearts are broken,” the Floyd County Sheriff’s Office said of Petry in a Facebook Post.

“This is another hard morning for Kentucky as we mourn the loss of three brave officers and a K-9 who gave their lives while protecting the people of Floyd County,” said Kentucky Governor Andy Beshear. “Britainy and I ask the commonwealth to join us in praying for the family and loved ones of Captain Ralph Frasure, Deputy William Petry and Officer Jacob Chaffins. Let us stand together in honoring these heroes and their sacrifice, and pray for a full recovery for those injured. “

KSP was called to assist at the scene at approximately 6:44 p.m. after the exchange of gunfire had already begun. The gunfire continued until the suspect, 49-year-old Lance Storz, was arrested shortly before 10 p.m.. He is facing both murder and attempted murder charges, and a charge of assault on a service animal.

LAWRENCE COUNTY, WV (WOWK) — The Lawrence County Sheriff’s Office in Kentucky says a fatal shooting occurred in the Peach Orchard area on Tuesday around 6:20 a.m. The Sheriff’s Office arrived on the scene after reports of shots fired, possibly related to a burglary. When deputies arrived, a witness said one of the suspects, Jerry […]
LAWRENCE COUNTY, KY・7 HOURS AGO
WOWK 13 News

BOYD COUNTY, KY (WOWK) – The Ashland Police Department is warning of a scam going around on social media that is being posted to community groups allegedly to create a scare. According to the Ashland PD, the scammers go into a community group and post a warning of alleged criminals in the area. Specifically, the […]
ASHLAND, KY・1 DAY AGO
WOWK 13 News

KENTUCKY (WOWK) – Kentucky Governor Andy Beshear says after two weeks of emergency-phase response to the devastating flooding that swept through parts of eastern Kentucky, the state is now in a stabilization phase and there are more ways for Kentuckians to get FEMA help. Sadly, the governor also confirmed another death related to the flooding, […]
KENTUCKY STATE・1 DAY AGO
WOWK 13 News

Former Ohio attorney guilty of stealing $882,000 from woman with dementia

COLUMBUS, Ohio (WCMH) – A former Ohio attorney has pleaded guilty to stealing more than $882,000 from an elderly woman with dementia over a seven-year period. Mark Alan Thomas, 62, of St. Clairsville, Belmont County, pleaded guilty to mail fraud and faces up to 20 years in prison, according to the U.S. Attorney’s Office for […]
COLUMBUS, OH・17 HOURS AGO

The medical investigator's report was made public Monday by the Santa Fe County Sheriff's Office along with numerous reports from the FBI.
SANTA FE COUNTY, NM・20 HOURS AGO
WOWK 13 News

When should drivers stop for school buses in Ohio?

OHIO (WOWK) — Back to school is upon us, which means school buses will be back on the road and drivers should expect new traffic patterns because of them. The Jackson County, Ohio Sheriff’s Office posted a guide on when to stop for a school bus in Ohio. The image says if the road has […]
JACKSON COUNTY, OH・1 DAY AGO
WOWK 13 News

HUNTINGTON, WV (WOWK) — A Huntington, West Virginia, man was sentenced to over 18 years in prison for possessing and intending to sell methamphetamine, cocaine and a fentanyl analog. According to court records, Joseph Ira Patterson, III, 38, admitted he sold methamphetamine to a confidential informant in Huntington in March 2021 and again in April […]
HUNTINGTON, WV・1 DAY AGO
WOWK 13 News

After 10 days of raising funds to help eastern Kentucky flood victims the Christian Appalachian Project announced Monday that more than $300,000 was raised for the Kentucky Flood Relief Fund.
KENTUCKY STATE・1 DAY AGO

CHARLESTON, WV (WOWK) – A West Virginia man will spend the next seven years behind bars for drug-related crimes. According to the United States Department of Justice, Scott Edward Hudson, 50, of St. Albans was sentenced to prison Monday, Aug. 15, 2022 for intent to distribute methamphetamine and being a felon in possession of a […]
SAINT ALBANS, WV・1 DAY AGO
WOWK 13 News

Justice declares State of Emergency in Kanawha and Fayette counties

JOHNSON COUNTY, KY (WOWK) — On Monday, dozens of Stacia Collins’ closest friends and family members were in tears as they said their final goodbyes to the young 12-year-old girl they say was taken from them too soon. “It’s sad, you can’t ever deal with it,” said Collins’ best friend Hayley Oiler. “I miss talking […]
PIKEVILLE, KY・1 DAY AGO
WOWK 13 News

Why Ohio BMV may owe you money, and how to get it

HUNTINGTON, WV (WOWK) – Drivers in Huntington will need to expect delays through next Tuesday for road repairs on Arlington Boulevard. According to the City of Huntington, the West Virginia Division of Highways will be making repairs to the culvert and pipe that carry storm water from Arlington Boulevard to the Guyandotte River. The closure […]
HUNTINGTON, WV・11 HOURS AGO
WOWK 13 News

KENOVA, WV (WOWK) — The West Virginia State Police is looking for a man that they say is involved in two breaking and entering cases in the Kenova area. They say the man stole a green Yamaha golf cart and put around $9,000 worth of work equipment in it. The WVSP says anyone with information […]
KENOVA, WV・1 DAY AGO

These are the top states to live in, study finds: How does West Virginia rank?

Think your state is the best to live in? You may want to think again, according to a new study.
REAL ESTATE・18 HOURS AGO
WOWK 13 News

A San Angelo business owner has been charged with a hate crime following her arrest for an assault that was caught in a viral video in April.
SAN ANGELO, TX・2 DAYS AGO
WOWK 13 News

WAYNE COUNTY, WV (WOWK) — A local teacher hit the teacher lottery by receiving multiple boxes full of school supplies from none other than actress and Charleston-native Jennifer Garner. Jennifer Garner is one of West Virginia’s most famous names. According to IMDb, Garner was born in Houston but was raised in the Mountain State’s capital […]
WAYNE COUNTY, WV・14 HOURS AGO
WOWK 13 News

FLAT TOP, WV (WVNS) — One local family reunion returned to the Mountain State for a weekend of fun. The 91st Annual Lilly Family Reunion came back to the border of Mercer and Raleigh County in Flat Top, West Virginia. This reunion was packed with events for the family all weekend. It included true Lilly […]
FLAT TOP, WV・2 DAYS AGO