No, that is not a new bike trail in the middle of I-80 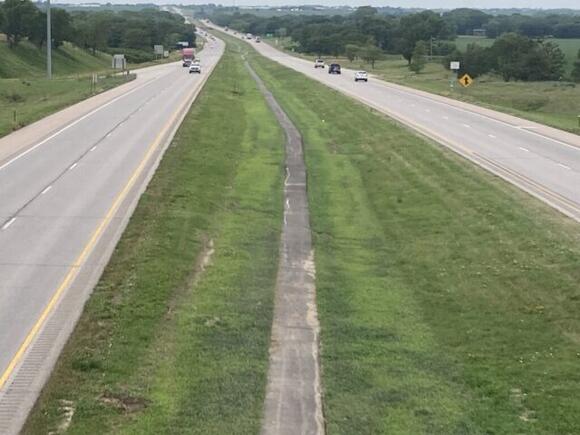 No, that unusual-looking, 22-mile-long strip of fresh asphalt in the middle of the Interstate 80 median west of Lincoln is not a new bicycle trail.

State transportation officials have been getting calls in recent weeks asking about “the new bike trail,” a strip of asphalt about three feet wide, recently laid down in the median from the Pleasant Dale exit to Utica.

But Jeni Campana of the Nebraska Department of Transportation said Thursday that the asphalt trail is the “base” for a new cable guard rail that will installed soon between the two I-80 exits.

Riding bicycles is banned on Interstates in Nebraska, Campana said, and for safety reasons, a trail of any kind would never be installed in the median.

“The medians are there for engineering purposes and for safety purposes,” she said. “Unauthorized vehicles should not be turning around in medians.”

The installation of the cable guard rail is part of a $9.5 million project in that stretch of I-80, which includes improvements to culverts, dirt work and some paving. Garcia/Chicoine Enterprises, of Milford is doing the work, which is expected to be completed before the end of the year.

Campana said the state has utilized cable guard rails in the Omaha area, on the Kennedy Freeway/U.S. 75 in South Omaha and Sarpy County for about a decade, to prevent vehicles from crossing over the median and causing head-on collisions.

She said safety data indicated that the guard rails were needed in the stretch between Pleasant Dale and Milford.

In March, three people were killed when a semi-trailer truck crossed the median causing a head-on collision, according to Lincoln television station KOLN/KGIN.

Campana said the cable guard rails were considered for I-80 from the west edge of Lincoln to Pleasant Dale, but that stretch is scheduled to be widened to six lanes, with work expected to begin in 2024.

Concrete barriers are used in medians of six-lane Interstate in urban areas, Campana added, but cable guard rails were the “best tool” in the Pleasant Dale-Utica area, where the medians are 64 feet wide.

In a news release, the Omaha Police Department announced the results of its gun and fireworks amnesty day yesterday.
OMAHA, NE・23 HOURS AGO
KMTV 3 News Now

3 News Now shared the stories of all five Pitch Black finalists over the past few weeks and on Saturday, a winner was announced.
OMAHA, NE・22 HOURS AGO
KMTV 3 News Now

It may not be October yet, but if you're looking for a taste of Halloween you'll want to check out Gothicon.
LA VISTA, NE・1 DAY AGO

It was an exciting day at Omaha's Henry Doorly Zoo and Aquarium. The zoo welcomed its millionth visitor for 2022 and these special guests were there to celebrate a birthday.
OMAHA, NE・3 DAYS AGO
KMTV 3 News Now

OPD announced the arrest of three suspects they say were involved in a Saturday night homicide near 34th and Davenport Streets in Omaha.
OMAHA, NE・21 HOURS AGO
KMTV 3 News Now

A tour bus belonging to Machine Gun Kelly parked near the Farnam Hotel in downtown Omaha was tagged today. 3 News Now was there as the graffiti was cleaned up.
OMAHA, NE・3 DAYS AGO
KMTV 3 News Now

Most of Nebraska wildfire contained, despite lack of rain

Fire crews made substantial headway in containing a western Nebraska wildfire that earlier destroyed some homes
GERING, NE・4 DAYS AGO

Iowa continues to lead the nation in puppy-mill violators

Iowa continues to lead the nation in puppy mills sanctioned by the federal government and is expanding its lead over other states.
IOWA STATE・3 DAYS AGO
KMTV 3 News Now

The Council Bluffs Police Department says Madison Avenue in Council Bluffs will be closed most of the day Wednesday for the removal of a tree.
COUNCIL BLUFFS, IA・4 DAYS AGO
KMTV 3 News Now

When you drive Interstate 480 near the Park Avenue neighborhood, you may have noticed a lavish old house. It's been empty for years but new life is coming to the row house, as affordable housing.
OMAHA, NE・2 DAYS AGO
KMTV 3 News Now

Right next to the commercial building planned for 15th and Fahey would include a dog park, sports courts, bike path and a movie screen that could be used as a drive-in movie theater.
OMAHA, NE・4 DAYS AGO
KMTV 3 News Now

Lady A has announced they have canceled their Request Line Tour for 2022. The band was scheduled to perform Saturday, Sept. 3, at the Nebraska State Fair.
3 DAYS AGO
KMTV 3 News Now

Developer Noddle Cos. is requesting city approval of public tax increment financing, about 10% of the price tag, to launch the project southwest of 15th and Mike Fahey Streets.
OMAHA, NE・5 DAYS AGO
KMTV 3 News Now

UPDATE: Police name suspect in felony arrest that closed lanes on I-80

On Friday, the Nebraska State Patrol conducted a felony stop on I-80 eastbound and westbound, closing all traffic along the Missouri River.
3 DAYS AGO
KMTV 3 News Now

The Ponca Tribe of Nebraska and the Red Sand Project came together on Friday for a human trafficking awareness event.
OMAHA, NE・2 DAYS AGO