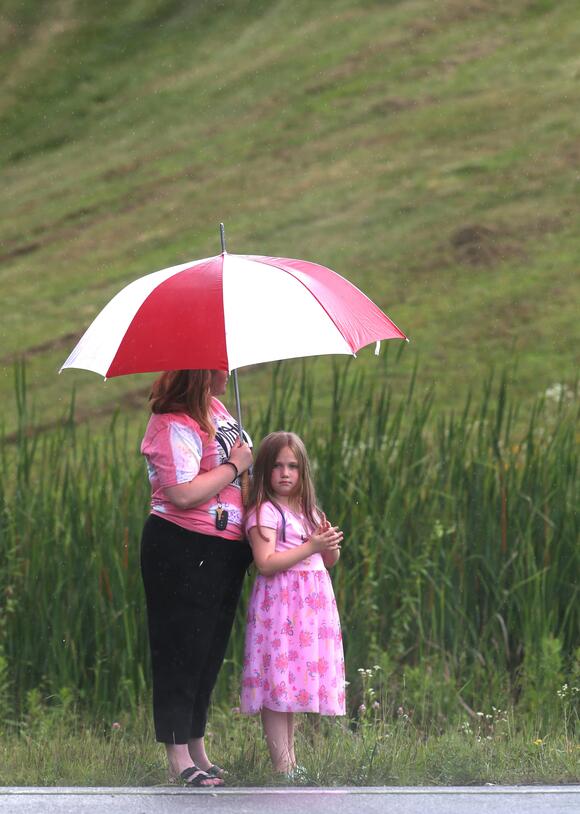 ALLEN, Ky. — A tiny eastern Kentucky town was reeling Saturday, days after three police officers died in a shooting as they tried to serve a warrant tied to a domestic violence situation.

“This is a tough morning for our commonwealth,” Gov. Andy Beshear said in a social media post Friday morning. “Floyd County and our brave first responders suffered a tragic loss last night.”

Kentucky State Police troopers, who are leading the investigation into the shootout, are still searching for answers that could explain why the night turned so deadly.

Friday afternoon, as a light mist fell on the town of Allen, Kentucky, population 166, the bodies of Captain Ralph Frasure and Deputy William Petry were taken from a local hospital and driven through the community in a hearse.

Later Friday night the town was rocked again as authorities announced a third officer, Jacob Chaffins, died as a result of the shooting.

Chaffins, the youngest of the three men who had died, had been an officer with the Prestonsburg, Kentucky, Police Department for just two years, serving as a canine handler for the department.

K9 Drago, one of the canines Chaffins handled, also died Thursday in what's been described by authorities as an ambush on officers who were serving the warrant.

More than 24 hours after gunfire erupted, tow trucks would remove at least two police vehicles from the scene — both littered with bullet holes.

Frasure had served with Prestonsburg Police for just shy of four decades before his life ended in the line of duty.

"For thirty-nine years you served with honor and glory up until the last second when you did not go down without a fight," the department posted.

Officers were met with a barrage of gunfire when they tried to serve the warrant to Lance Storz, 49, at his home, police said.

The shooting continued for nearly three hours, authorities said, before Storz was taken into custody.

In addition to the slain officers, three other law enforcers and the emergency management director were injured but are recovering.

Judge Eric D. Hall ordered Storz remain in custody on a $10 million bond. His next court date is July 11.

What led to the warrant being issued?

Details about the nature of the alleged domestic violence were not immediately available. The Courier Journal could not find any other criminal history for Storz in Kentucky. And state police are searching for answers as well.

"We're trying to figure out what led up to before the active shooting took place," Kentucky State Police Trooper Matt Gayheart said Friday evening. Several law enforcement officials remained at the scene of the shooting well into the night.