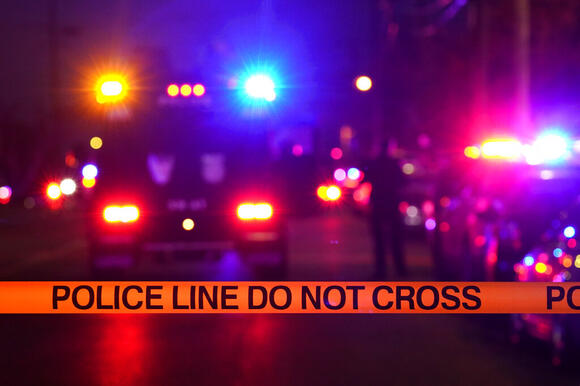 Three law enforcement officers were killed and three other officers were shot Thursday night after a man barricaded in his home opened fire with a rifle in Allen, Kentucky, a rural town so small that it lacks its own police force, authorities said.

The Kentucky State Police, which is investigating the shooting, said that another person who is not an officer had also been shot during the episode and that a police dog had been struck and killed. An additional officer suffered an injury unrelated to gunfire, Capt. Paul Blanton of the Kentucky State Police said in an interview.

Two of the officers who were shot remained in the hospital on Friday, authorities said. One was treated and discharged. The non-officer was receiving medical care at a hospital, but a precise condition was not immediately known.

Police arrested Lance P. Storz, 49, who faces several charges, including murder, attempted murder and assault on a service animal, according to an arrest citation. The circumstances that led to the shooting are still unclear, Blanton said.

According to the Lexington Herald-Leader, police received a complaint Thursday that Storz had assaulted a woman, who had obtained an emergency protection order that officers were trying to serve to Storz.

Sheriff John Hunt of Floyd County told the Herald-Leader that it appeared that Storz had been waiting for officers and had opened fire without warning.

“They encountered pure hell,” Hunt said. “They had no chance.”

Allen, a town of fewer than 200 residents about 120 miles east of Lexington, does not have its own police force, so officers from nearby agencies, including the Floyd County Sheriff’s Department and the Prestonsburg Police Department, responded to the home, authorities said.

I'm sorry for the police cause so many hate them and yet when there is a problem they are the first ones called...They go to work in the morning realizing they may never come home again or their families may be harassed... Can you imagine every single day having to deal with other people's anger, drug addicts, alcoholics, mentally ill and those that never emotionally left high school? Sad isn't it and extremely stressful

Awe man, that shooter lived, smh. I was hoping he'd off himself or the cops would had offed him. RIP to those cops and the service dog

Visitors stand near a makeshift memorial to Breonna Taylor in Louisville, Ky. on Oct. 2, 2020. (Xavier Burrell/The New York Times) Federal officials on Thursday charged four current and former police officers in Louisville, Kentucky, who were involved in a fatal raid on the apartment of Breonna Taylor, accusing them of several crimes, including lying to obtain a warrant that was used to search her home.
LOUISVILLE, KY・7 DAYS AGO
Insider

Kiely Rodni, 16, was last seen at a party near a campground in Truckee, California, early Saturday morning.
TRUCKEE, CA・3 DAYS AGO
Daily Mail

Alabama boy, 12, who fabricated story about an intruder killing his mother admits to cops that he accidentally shot her dead in their home

A 12-year-old boy confessed to accidentally shooting his mother, a 29-year-old registered nurse, after he originally claimed she was killed by an intruder in the family's Forestdale, Alabama home. Ayobiyi Cook, who friends called 'Yo-Yo', was found dead in the suburban home on the 2400 block of Freemont Avenue after...
FORESTDALE, AL・2 DAYS AGO
NBC News

A 4-year-old boy is dead after wandering onto an Indiana highway on Monday. According to a press release from the Warrick County Sheriff’s Office, the boy, Braxton Freeze, had been staying at a place of business with his mother and her boyfriend at the time of the accident, which occurred around 4:01 a.m. After leaving the establishment unnoticed while the adults were asleep, Freeze was struck by a vehicle headed west on State Road 66.
WARRICK COUNTY, IN・1 DAY AGO

Aug. 9 (UPI) -- A Minnesota board of county commissioners on Tuesday approved a nearly $1.5 million settlement for correctional officers who were told they were not to have contact with former Minneapolis Police officer Derek Chauvin. The officers at Ramsey County Adult Detention Center alleged that Superintendent Steve Lydon...
RAMSEY COUNTY, MN・1 DAY AGO
The New York Times

One person was killed and four others were critically injured Saturday after they were stabbed while tubing on the Apple River in Wisconsin, a popular summer spot that attracts visitors from across the region, authorities said.
11 DAYS AGO
KCBS News Radio

Brentwood police have detained two people in connection deadly shooting at a 24 Hour Fitness early on Thursday. No arrests have been made after one person died and three others were injured.
SAN FRANCISCO, CA・40 MINUTES AGO
The New York Times

NEW YORK — A New York City correction officer charged with killing an 18-year-old man in the Bronx told police that he fired a single bullet after being hit in the back with what felt like glass shards or bullet fragments, according to accounts provided at his arraignment Friday.
BRONX, NY・19 DAYS AGO

A 53-year-old man and his black Border collie, Saul, were on a hike last week near California’s Tahoe National Forest, surrounded by trees and steep canyons, when something went wrong. The man fell 70 feet from a ridge, breaking his hip and multiple ribs, authorities said. He had no phone. Just a dog by his side.
CALIFORNIA STATE・23 DAYS AGO