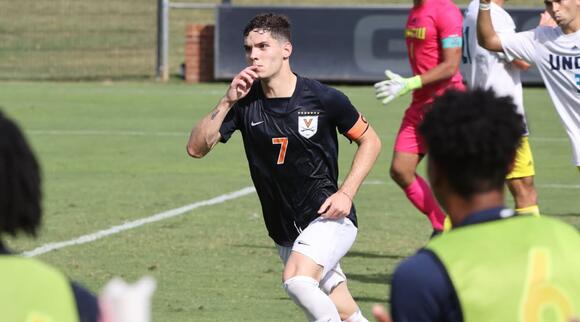 With the 2021-2022 Virginia athletics season officially completed, we enter the college sports offseason optimistic for things to come for the Cavaliers next season. But with the fall seasons still a couple of months away, we have time to take a look back at some of the incredible athletic accomplishments achieved by UVA student athletes during the 2021-2022 sports year in a series called Highlight Hoos .

Today, we take a look at the breakout sophomore campaign of Leo Afonso on the Virginia men's soccer team last fall.

The 2021 season was a difficult one for the UVA men's soccer program. The Cavaliers turned in a 6-9-3 overall record, including a 2-5-1 mark in conference play, and failed to qualify for the NCAA Tournament for the second-straight season. That was certainly a down year for a program that has won seven NCAA national championships and 16 ACC championships and had been to 39-straight NCAA Tournaments before the 2020-2021 season.

One of the bright spots of the season was the emergence of sophomore striker Leo Afonso.

A strong finish to the spring part of the 2020-2021 season set Afonso up for a successful fall. He started in five of the final six games in the spring, scoring his first two career goals in the last four games of the season.

Between 2019 and 2021, the Cavaliers lost nearly every major contributor from the 2019 team that reached the national championship game. With such a significant amount of roster turnover, the stage was set for a new face to lead the Virginia offense

Leo Afonso stepped into that role. Starting in all 15 games, Afonso recorded eight goals, twice as many as the next highest scorer on the team, to go along with two assists and he led the team with 18 total points. Afonso scored a goal in five of the final six games and recorded at least one point in each of the last six. He also recorded his first-career brace in a 2-1 victory over Boston College on October 8th.

Afonso finished tied for eighth in the ACC in total goals, fifth in average goals at 0.53 per game, and was tenth in the conference in points. He ranked third in the ACC in average shots with 3.27 shots per game. At the end of the season, Afonso was voted to the All-ACC Second Team.

With several starters returning and a strong recruiting class coming in, UVA fans are certainly looking forward to a bounce-back season for the Virginia men's soccer program this fall with Leo Afonso leading the way.

Cavaliers in the MLB: Checking in on All the Former Hoos in the Pros

One of North Carolina's top 2023 prospects announced his commitment to the Volunteers on Tuesday
CHARLOTTESVILLE, VA・16 HOURS AGO
Cavaliers Now