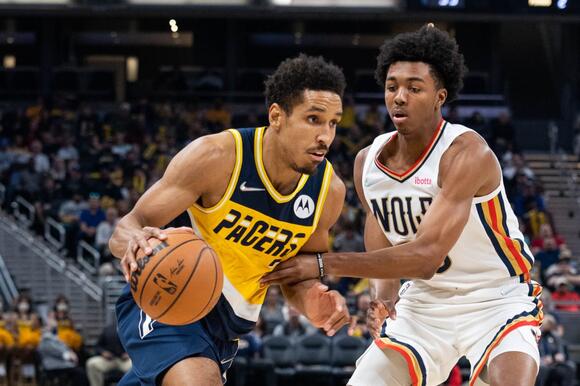 One of the most notable trades of the NBA offseason so far was centered around former Virginia men's basketball star Malcolm Brogdon. The Boston Celtics traded Daniel Theis, Aaron Nesmith, Nik Stauskas, Malik Fitts, Juwan Morgan, and a 2023 first-round pick to the Indiana Pacers in exchange for Brogdon.

The trade sends some assets and a future first round pick to the rebuilding Pacers and the Celtics get a key piece they feel they have been missing: a playmaking point guard. The defending Eastern Conference Champions will be an early favorite to make a return trip to the NBA Finals next season as they managed to land Brogdon while keeping their core of Jayson Tatum, Jaylen Brown, Marcus Smart, Al Horford, Robert Williams, as well as several key role players on the roster.

"This Boston team is experienced and hungry to win a championship," Brogdon said to ESPN's Marc Spears on Friday. "I'm excited to be apart of the Boston family and compete for that championship."

The NBA sports world reacted strongly to the news of the Brogdon trade on Friday with mostly glowing reviews of his fit with the team and how just how good the Celtics could be next season with Brogdon on the floor. We've collected some of the reactions from social media:

ESPN's Stephen A. Smith and Adrian Wojnarowski applauded the Celtics for filling a need on their roster by landing Brogdon:

StatMuse reminded everyone how good Brogdon is with a note about his membership in the exclusive 50-40-90 club:

Always finding the betting angle in every story, Bleacher Report officially dubbed the Celtics the betting favorite to win the NBA Finals next season following the Brogdon trade:

Boston journalist Adam Kaufman thinks the trade is a home run for the Celtics, as long as Brogdon can avoid injury troubles:

Malcolm Brogdon didn't go with an edited "jersey swap" picture for his Instagram post reacting to the trade, instead opting for a picture of him in a Pacers jersey, but with a Boston Celtics championship banner in the background. He captioned the post "One goal" with a trophy emoji:

It is unclear if he will have a spot in Boston's starting five at point guard or if he will take the sixth man role, but what is clear is that Malcolm Brogdon suddenly has the best opportunity of his career to win an NBA Championship.

Cavaliers in the MLB: Checking in on All the Former Hoos in the Pros

The 2022-23 NBA regular season schedule has yet to be formally released, but there already are some leaks.
NBA・36 MINUTES AGO
USA TODAY Sports Media Group

Three rounds are in the book at the 2022 FedEx St. Jude Championship and 23 golfers are within 5 strokes of the lead in the 1st FedExCup Playoff event. Below, we look at the 2022 FedEx St. Jude Championship odds entering Sunday’s final round in Memphis, Tenn. (NBC). Check back throughout the season for our PGA Tour picks, predictions and bets.
MEMPHIS, TN・38 MINUTES AGO