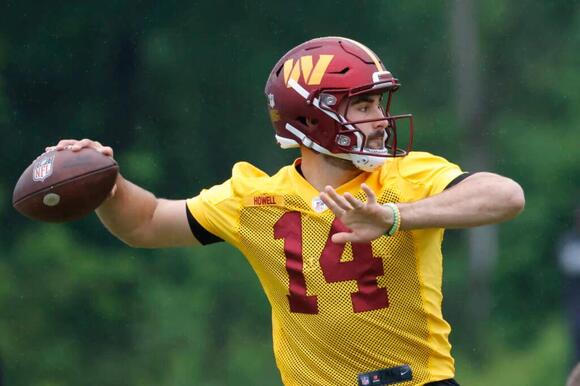 The Washington Commanders selected quarterback Sam Howell betting on the upside after he showed significant promise in his college career. While the future might be bright for Howell, he likely will be a non-factor in 2022.

Washington made significant changes to its quarterback room this offseason, paying a steep price to acquire Carson Wentz as the starter and leader of its offense. It bumped Taylor Heinicke to the backup role, seemingly providing the Commanders with plenty of quarterback depth.

As the 2022 NFL Draft rolled on, though, Howell kept falling. Once viewed as a consensus first-round talent and a potential Heisman Watch candidate , the 6-foot-1 quarterback’s stock plummeted in 2021. When he was still available at No. 144, Washington didn’t hesitate to snag him. 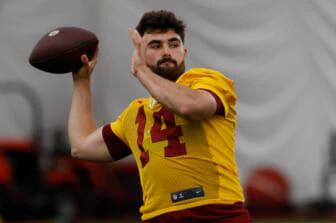 Also Read:
First-year college phenom Sam Howell is starting over in the NFL

Heading into his first NFL season, practice reps have been a bit hard to come by for Howell. The Commanders want to fully integrate Wentz into the new offense, allowing him to develop chemistry with the receivers and master the intricacies of the scheme. With Heinicke also on the roster, it’s left a limited number of reps for Washington’s rookie signal-caller.

While there is definite excitement for Howell long-term, it seems his role for the Commanders heading into the 2022 season is largely defined. According to John Keim of ESPN , Howell is essentially locked in as the third-string quarterback for the 2022 season.

He will get plenty of snaps in the preseason, experiencing the faster pace of the NFL and learning to make adjustments in-game and during the week. However, even his outlook for 2023 isn’t especially promising. Keim also notes that Howell might only have a shot to be the backup quarterback next year. 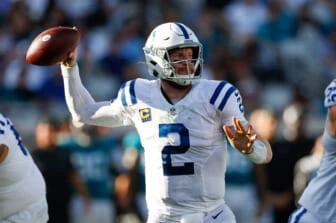 While the Commanders like Howell, the front office and coaching staff is even more sold on Wentz as the long-term solution. Recent history suggests that could change within a year, but Washington isn’t going to provide any hint of doubt months after a deal that NFL executives ripped the front office for making .

One of the marquee matchups of the 2022 season takes place in Tampa Bay as the Green Bay Packers travel
TAMPA, FL・23 HOURS AGO
Sportsnaut

Josh Allen will lead his Buffalo Bills into South Beach to take on Tua Tagovailoa and the Miami Dolphins on
BUFFALO, NY・2 DAYS AGO
Sportsnaut

Dallas Cowboys owner Jerry Jones is no stranger to creating headlines with his comments in the media. After one of
DALLAS, TX・1 DAY AGO
Sportsnaut

Even before the season began, many regarded the Buffalo Bills as one of, if not the best team in football.
NFL・20 HOURS AGO

The NFL injury report is always filled with some of the game’s best stars, leaving fans and fantasy football managers
NFL・14 HOURS AGO
Sportsnaut

What is the fastest pitch in MLB? New York Yankees closer Aroldis Chapman can light up the radar gun like
NFL・1 DAY AGO
Sportsnaut

A former New York Giants running back who filed suit against his medical team won a $28.5 million verdict, the
SAN FRANCISCO, CA・20 HOURS AGO
Sportsnaut

Pittsburgh Steelers schedule: Ugly losses adding up heading into Week 4 against the Jets

For the entirety of the Sean McDermott/Brandon Beane era, the injury bug has rarely hit this Buffalo Bills team. Call
NFL・1 DAY AGO
Sportsnaut

College Football standings 2022: Clemson is the current top dog in the ACC

Looking to continue adding to their roster after a loss that saw them give up 42 points, the Baltimore Ravens
BALTIMORE, MD・2 DAYS AGO
Sportsnaut

New York Jets quarterback Zach Wilson is closing in on his return, with doctors reportedly expected to clear him to
NFL・23 MINUTES AGO

The Boston Celtics are still figuring out their 2022-2023 season plans following the suspension of head coach Ime Udoka, and
BOSTON, MA・1 DAY AGO
Sportsnaut

Tampa Bay Buccaneers quarterback Tom Brady is an emotionally-driven player and it came out in Week 2 against the Tampa
NEW ORLEANS, LA・42 MINUTES AGO
Sportsnaut

The matchup on Sunday between the Green Bay Packers and Tampa Bay Buccaneers is a very juicy one. Obviously, the
TAMPA, FL・1 DAY AGO

Football teams, whether it’s coaches, assistants, or players, spend hours watching film. Unlike in previous generations, they have access to
CHARLOTTE, NC・1 DAY AGO
Sportsnaut