Get the latest breaking news, sports, entertainment and obituaries in Wilmington, NC from Wilmington Star-News.

Conditions were expected to clear up throughout the remainder of the weekend after a tropical storm moved across coastal North Carolina Saturday.

Overnight Friday into Saturday morning, Tropical Storm Colin developed near the South Carolina coastline south of Georgetown and just inland from Charleston, according to the National Weather Service. Wilmington and surrounding areas were placed under a tropical storm warning early Saturday morning in preparation for the storm. 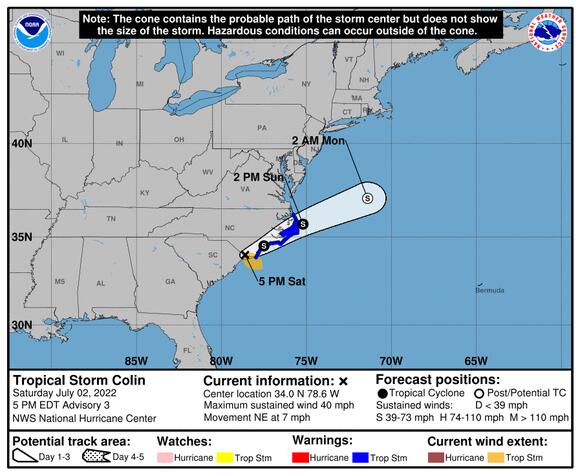 Wilmington experienced just over 1 inch of rainfall as Colin moved through the area, according to the National Weather Service.

Related news: What are the 5 worst hurricanes to ever hit the Wilmington area?

The area is expected to have some isolated rain throughout the evening into Sunday morning, but no thunderstorms are expected. A tropical storm warning was lifted for Brunswick County late Saturday afternoon, but remained in effect for New Hanover, Pender and coastal areas north as of 7 p.m. Saturday.

Beachgoers should stay aware of elevated risks of strong rip currents through the weekend due to the storm.

National Weather Service Meteorologist Jordan Baker said while the storm was unfortunate for tourists in town for the holiday weekend, the significant rainfall Colin brought was much needed in Wilmington and surrounding counties.

A news release from Gov. Roy Cooper reminded residents to always be prepared amid hurricane season. Residents can find information on preparing hurricane safety kits at ReadyNC.gov , and residents in coastal counties can learn about their evacuation zone on the state Department of Public Safety website .

“This storm that formed quickly and rather unexpectedly is a reminder that we all need to be prepared and vigilant during hurricane season,” Cooper said in the news release. “If you are enjoying the holiday weekend at the coast, keep a close eye on the weather and be sure to follow directions from local officials and lifeguards.”

Get the latest breaking news, sports, entertainment and obituaries in Wilmington, NC from Wilmington Star-News.