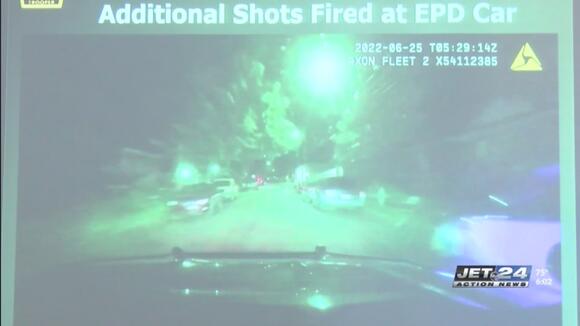 Pennsylvania State Police (PSP) have identified two suspects involved in a weekend shootout, charging them with attempted homicide of a police officer.

According to police, the suspects shot at state troopers as well as an Erie City Police Officer on Erie’s west side.

Chelsea Swift was live from the 1600 block of Chestnut Street to tell us more about the search for the suspects.

According to police, two suspects shot at multiple police officers, then took off on foot.

Rakeem Jones, 29, and Shadarryl Jones, 29, are wanted for attempted homicide of a police officer.

The shooting took place on Saturday, June 25 around 1:30 a.m. State Police say the suspects were speeding near West 26th and Chestnut streets before coming to a sudden stop in the road.

The passenger then allegedly opened his door and fired multiple rounds at a state police patrol car.

According to police, the suspects then fled and crashed into a parked car near Chestnut and Huron streets. There the suspect exited the vehicle and the passenger fired at an arriving Erie Police car as well a PSP patrol unit.

“The suspects evaded capture and discarded a 9mm handgun at the scene. Several uninvolved vehicles and homes were struck by suspect’s gunfire, including a home with an 11-year-old boy sleeping inside,” said Captain Kirk Reese, commanding officer, Pennsylvania State Police.

Erie Police Chief Dan Spizarny says while this incident is unusual, these suspects are dangerous and need to be taken off the street.

“It has happened on occasion. This is a situation that was extremely serious, there were more rounds fired at the officers than an officer has in their weapon. The danger is still existing because these two are loose and they’re out there,” said Chief Dan Spizarny, Erie Police Department.

Spizarny says anyone with information is urged to contact State Police at 814-898-1641.

“We have gotten calls about video of the suspects fleeing from the officers through the yards, we’ve been collecting that. So if anyone would come up with any additional information or know their whereabouts, that’s our most important thing is to get them off the street,” said Chef Spizarny.

In addition to attempted homicide, both suspects also face aggravated assault charges and firearm offenses. Police did recover the weapon from the scene.

when the suspects car crashed, hoping to hear they were killed, our police lives matter , they lives are in jeopardy every minute of every day, to protect us from these animals on the streets!!!

One man is behind bars and facing a number of charges after an alleged burglary. Pennsylvania State Police (PSP) were called out to The Country Fair Store located in the 4000 block of Buffalo Road in Harborcreek around 4:30 a.m. Saturday morning. Upon arrival, police found that a suspect had forced their way into the […]
ERIE, PA・7 HOURS AGO
YourErie

On August 13 at approximately 4:29 a.m., Pennsylvania State Police were dispatched to a burglar alarm at the Country Fair on 4753 Buffalo Road in Harborcreek. Upon arrival, police found that a suspect had forced their way into the store through a storefront window. Troopers then found a male suspect within the store who was […]
HARBORCREEK TOWNSHIP, PA・16 HOURS AGO
YourErie

The man accused of attacking author Salman Rushdie at the Chautauqua Institution on Friday has been charged with attempted murder and assault, according to Chautauqua County District Attorney Jason Schmidt.
CHAUTAUQUA COUNTY, NY・15 HOURS AGO
YourErie

(WJET/WFXP/YourErie.com) – On August 12, the Bureau of Criminal Investigation arrested Hadi Mattar, 24, of Fairview NJ. Mattar was arrested for attempted murder 2nd degree and assault 2nd degree. Mattar was then processed at SP Jamestown and then transported to Chautauqua County Jail where he will be arraigned in centralized arraignment on August 13. The […]
CHAUTAUQUA COUNTY, NY・13 HOURS AGO

The New Jersey man accused of repeatedly stabbing author Salman Rushdie has entered a not guilty plea. An attorney for Hadi Matar, 24, entered the plea on his behalf during Matar’s arraignment on Saturday in Chautauqua County, New York. Matar has been charged with attempted murder and assault. Matar allegedly rushed the stage at The […]
CHAUTAUQUA COUNTY, NY・4 HOURS AGO
YourErie

An ATV accident left one Pennsylvania man severely injured. On Saturday at around 3:16 p.m., the Chautauqua County Sheriff’s Office and the Sherman Fire Department responded to an address on French Creek Road in the Town of Sherman for an ATV accident with personal injury. According to the sheriff’s office, the investigation found that Eli […]
BOALSBURG, PA・6 HOURS AGO
YourErie

It was a close call for two houses located in Erie’s east side. A rollover accident took place in the 900 block of East 8th Street around 9 p.m. on August 12. According to reports from the scene, a car slammed into a pole which caused the pole to almost slam into one of the […]
ERIE, PA・13 HOURS AGO
YourErie

Erie, Pennsylvania (WJET/WFXP/YourErie.com) — A local TV reporter accused of making false reports of stalking was in court for a preliminary hearing Thursday. Pennsylvania State Police charged Haley Potter with a list of crimes, including two felonies on July 11. After an hours-long hearing, a District Judge dismissed the felony charges and one of the […]
ERIE, PA・2 DAYS AGO
YourErie

The FAA and the Sheriff's Office are investigating this crash.
CHAUTAUQUA COUNTY, NY・1 DAY AGO
YourErie

(WJET/WFXP/YourErie.com) — What started as a routine speaker series quickly turned violent as Salman Rushdie was attacked on stage at the Chautauqua Institution. The New York State Police have named the alleged suspect as 24-year-old Hadi Matar from Fairview, New Jersey. We asked if he was working alone and they presume it was a lone […]
ERIE, PA・1 DAY AGO

(WJET/WFXP/YourErie.com) — Salman Rushdie, the author whose writing led to death threats from Iran in the 1980s, was attacked Friday as he was about to give a lecture at the Chautauqua Institution in western New York. New York State Police reported the 75-year-old author was stabbed at least once in the neck, and at least once […]
ERIE, PA・1 DAY AGO
YourErie

The community is stepping up once again to help a Cranesville family who lost everything in a house fire in July. A house fire on July 6 displaced a family of 12, who have been rebuilding the house since. The community has been donating building supplies, food and clothing. On Saturday, a benefit for the […]
CRANESVILLE, PA・1 DAY AGO
YourErie

Motorcycle crash sends one to hospital

One person is critically injured in a motorcycle accident. This happened around 7:15 p.m. Thursday on West Law Road in North East. According to reports on the scene, the motorcyclist was taken to the hospital. They suffered a broken leg and a laceration to the head. There is no word on what caused the accident.
NORTH EAST, PA・2 DAYS AGO
YourErie

(WJET/WFXP/YourErie.com) — Author Salman Rushdie undergoes surgery at UPMC Hamot. He was rushed to Erie after being stabbed while on stage at the Chautauqua Institution Friday morning. Now, a suspect is in custody. Chaos on the stage at the Chautauqua Amphitheater. A man rushed author Salman Rushdie as he was being introduced, stabbing him in the […]
ERIE, PA・1 DAY AGO
YourErie

Community members from all throughout Erie and Crawford counties have shown concern about a garbage pickup company — Raccoon Refuse. One viewer who called us showed the most concern for a transfer station in Spartanburg where mountains of trash can be seen. Residents tell us it has been overflowing for weeks. One of our reporters […]
CRAWFORD COUNTY, PA・1 DAY AGO
YourErie

Erie man swims across Edinboro Lake for a good cause

An Erie man swam across Edinboro Lake Friday for a good cause. For the past month, Greg Heintz has been training for this swim while raising money for Shriners Hospitals for Children. The swim was a little more than one mile and took him less time than expected because of the perfect lake conditions. Heintz […]
ERIE, PA・1 DAY AGO
YourErie

The Erie community is once again stepping up to help a family in Cranesville who lost everything in a house fire in July. The fire took place on July 6 and displaced a family of 12 who have been rebuilding their house since. The community has been donating building supplies, food and clothing. A benefit […]
ALBION, PA・14 HOURS AGO
YourErie