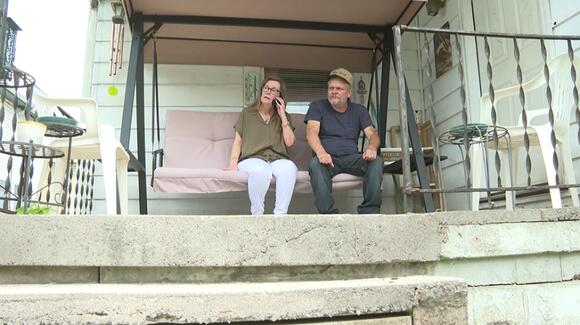 ALLEN, Ky. ( FOX 56 ) – The community of Allen is shaken after a Thursday night shooting left multiple people injured or dead .

Authorities said five other officers were also injured and a K-9 deputy was also pronounced dead at the scene after a suspect opened fire in what Floyd County Sheriff John Hunt called an “ambush.”

There is no word on the conditions of the five additional officers being treated for injuries at this time.

Two neighbors talked to FOX 56 about what they saw Thursday.

One neighbor who lives in this house you see here behind me says that he heard a loud ‘boom’ and it’s what drew him out here last night on Main Street where he said he witnessed most of the shooting that lasted hours.

“It was like a ‘BOOM!’ It sounded like someone knocked a grill out or something,” said Allen resident Charles Conn.

Charles told FOX 56 he was on the corner of Main Street with his son and neighbor when a Kentucky State Police Trooper pulled up to the scene.

“He opened up on him, I mean he was shooting at him, 30 times at that cop,” said Charles.

He said gunfire continued for a while until he noticed the fire truck next to him.

“There’s a bullet hole in the glass,” he said, and then he said it got worse.

“He (a firefighter) got shot right there behind those rose bushes. When he went down, that’s when we all went in the house.”

Allen resident Tammy said she was on the phone with her niece who lives next to Lance Storz.

Prestonsburg Mayor Les Stapleton has been spending the entire day setting up grief counseling in Prestonsburg at the Mountain Arts Center.

The Kentucky State Police has launched an investigation in Harlan County regarding an apparent murder-suicide.
HARLAN COUNTY, KY・4 DAYS AGO
FOX 56

Back to school season is in full swing across the commonwealth, but for the hard-hit communities in eastern Kentucky there are many schools that are pressing pause as they cleanup and figure out where classes will continue.
LOST CREEK, KY・2 DAYS AGO
FOX 56

Fire ants infiltrate southern Kentucky counties; how to spot and report them

Fire ants are gaining notice in southern counties of Kentucky, and it has the attention of entomologists with UK Agriculture and Horticulture's Cooperative Extension Service.
WHITLEY COUNTY, KY・2 DAYS AGO

How to help: Kentucky flood victims plea for assistance after claims rejected

A bourbon and whisky auction is taking place to help raise money for those in need after the flooding in eastern Kentucky.
KENTUCKY STATE・2 DAYS AGO
FOX 56

Gov. Andy Beshear called out the Federal Emergency Management Agency for denying too many requests for assistance in flood-ravaged eastern Kentucky.
KENTUCKY STATE・2 DAYS AGO
FOX 56

Kentucky State Police in Hazard are continuing their search for two Breathitt County women who have been missing since the eastern Kentucky flooding took place.
BREATHITT COUNTY, KY・6 DAYS AGO

The chemical, called Delta-8 THC, is billed as producing a milder high than the better-known Delta-9 THC. Delta-8 is often marketed as being legal even where marijuana is not.
5 DAYS AGO
FOX 56

MOREHEAD, Ky. (FOX 56) – With classes starting Monday, Aug. 15, at Morehead State University, students and school officials alike are gearing up for what is a historic year for the school. “It’s historic because we are starting our 135th year of educating students right on the side of this mountain,” said MSU’s President Dr. […]
MOREHEAD, KY・1 DAY AGO
FOX 56

Who stops when a school bus stops in Kentucky?

How are officials trying to get eastern Kentucky students back in school?

The area hit by flooding is home to 18 school districts.
KENTUCKY STATE・3 DAYS AGO
FOX 56

The place where JCPenney once stood, is now the place where flood victims from across the area can get what they need.
PERRY COUNTY, KY・5 DAYS AGO
FOX 56

Kentucky State Police is looking for another top finish in this year's "America's Best-Looking Cruiser" contest.
5 DAYS AGO
FOX 56

FRANKFORT, KY (WOWK) — Gov. Andy Beshear gives an update on the historic eastern Kentucky flooding that started on July 26, 2022. President Joe Biden joined Gov. Andy Beshear on Monday to meet with families and survey damage from storms that have created the worst flooding in Kentucky’s history. Here’s how you can help the […]
KENTUCKY STATE・4 DAYS AGO
FOX 56

‘He had a heart of gold’: Knott Central High School teen dies after helping clean up flood damage