shreveporttimes.com is the home page of Shreveport Louisiana with in depth and updated Shreveport local news.

Louisiana woman to meet with police chief about citation for shorts, crop top in viral TikTok

A Winnfield, Louisiana, woman received an indecent exposure citation while attending a festival downtown and took to TikTok to complain. Now Casey LaCaze-Lachney has obtained an attorney and hopes to get the ticket dismissed.

Attorney Randall T. Hayes representing LaCaze-Lachney and has been in contact with Winnfield Police Chief Johnny Ray Carpenter. So far, Hayes' request for the body cam footage of the three female police officers who gave the citation has not been fulfilled.

Assistant Police Chief Russell Jones clarified this was because the incident is still under investigation and advised Hayes to speak with City Prosecutor Herman Castete, who advises the department on what is able to be released.

Hayes said Carpenter has agreed to meet with him and LaCaze-Lachney next week to discuss the issue but still needs to speak with two of the police officers who were at the scene that day. 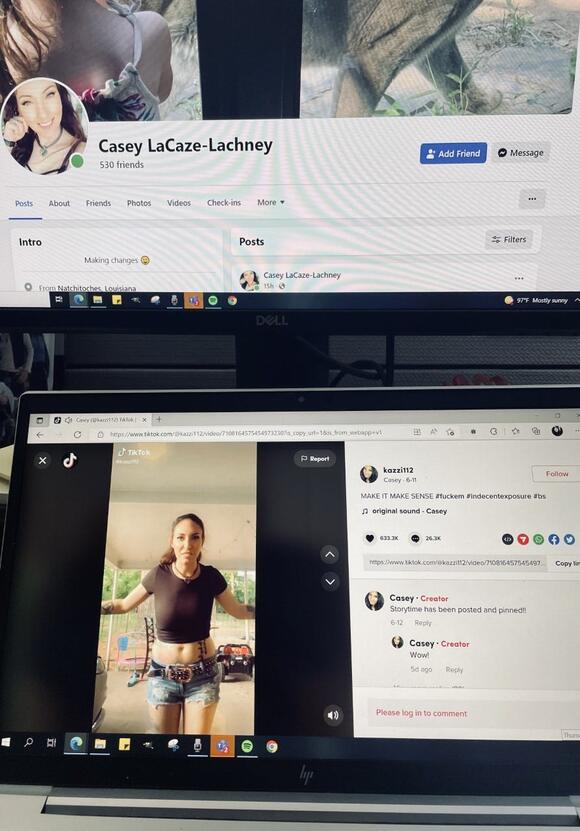 "I reminded the chief that I requested the body camera video from this incident early last week," Hayes said. "I told him that I would like to know when the video will be provided. He said he and the city attorney will call me about that next week."

"There are two elements to this crime that Casey is alleged to have committed. One: The undergarments or one of the body parts mentioned must be exposed. Two: The exposure must be intentional. Neither of these elements were met. There is no evidence that Casey even unintentionally exposed herself in any of the ways covered by the ordinance. The claim that Casey intentionally did anything like that while attending a festival with her husband and her children in downtown Winnfield is not believable."

The Shreveport Times has reached out to the Winnfield Police Department for comment and has not received a response.

Meredith G. White is the arts and culture reporter for the Shreveport Times. You can find her on Facebook as Meredith G. White, on Instagram and Twitter as @meredithgwhite, and email her at mgwhite@gannett.com.

This article originally appeared on Shreveport Times: Louisiana woman to meet with police chief about citation for shorts, crop top in viral TikTok

There is an ordinance in our town about "sagging pants" and exposing underwear. I see nothing wrong with women having to be properly clothed in public so their body parts and underwear isn't exposed.

shreveporttimes.com is the home page of Shreveport Louisiana with in depth and updated Shreveport local news.