Vehicles engulfed by flames after crash, 2 taken to hospital 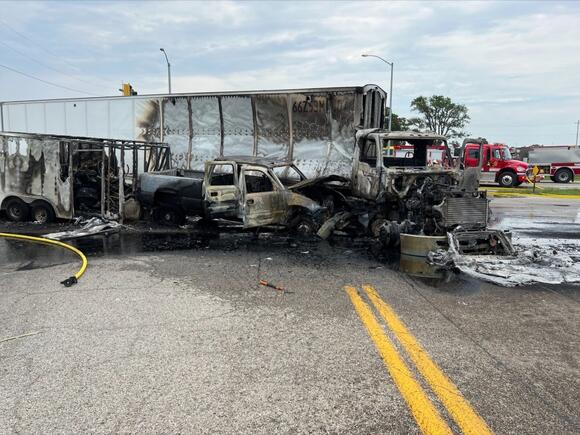 TOPEKA ( KSNT ) – Two vehicles were covered in flames in a car crash on Friday with two individuals being taken to a local hospital.

According to the Shawnee County Sheriff’s Office, more than one vehicle caught on fire following a car crash at the intersection of Southwest Topeka Boulevard and Southwest University Boulevard at 2:20 p.m. on July 1.

Motorists were being asked to avoid the area and use alternate routes such as Southwest 75 Highway and Southwest 57th Street. As of 4:51 p.m., the road has been reopened.

Abigail Christian, the Public Information Officer for the Sheriff’s Office, told 27 News that the crash involves multiple vehicles. A preliminary investigation shows that two vehicles, a truck and a semi-truck, were involved in the crash.

Another statement from Christian revealed that the semi-truck collided with a pickup truck. Both vehicles soon became engulfed in flames. Three occupants were able to escape the vehicles with both drivers being taken to a local hospital by American Medical Response. The passenger of the pickup truck was checked out at the scene. A third vehicle may have been involved in the crash.

An investigation into how the crash occurred is underway.

Pedestrian killed in crash on I-70

KCPD Police fire at man who charges them in vehicle: MHP

KANSAS CITY, Mo. — The Missouri Highway Patrol said a man who drove toward Kansas City Police Department officers at a gas station on Sunday night was shot and killed. Investigators said officers were called to a Phillips 66 gas station at 55th and Prospect on reports of a stolen vehicle just before 10 p.m. […]
KANSAS CITY, MO・4 HOURS AGO
KSNT News

SHAWNEE COUNTY (KSNT) – A deadly motorcycle crash in Shawnee County has taken the life of a 63-year-old man from Topeka. Larry D. Miller, 63, of Topeka, was killed Saturday night on Highway 40 at 10:24 p.m. According to the Kansas Highway Patrol, a 2015 BMW, being driven by a 16-year-old female, was going eastbound […]
SHAWNEE COUNTY, KS・1 DAY AGO
KSNT News

GREENWOOD COUNTY (KSNT) – The Kansas Highway Patrol has confirmed at least one death in Greenwood County following a head-on collision. According to the KHP, at 10:11 p.m. Thursday night, a vehicle traveling west on US-54 crossed the center line and hit an eastbound vehicle head-on. The crash happened at milepost 472.3, or 20 miles […]
GREENWOOD COUNTY, KS・3 DAYS AGO

Butler County dispatchers say three people were on the plane and that one of those people called 911 to report the crash
BUTLER COUNTY, KS・2 DAYS AGO
KSNT News

GEARY COUNTY (KSNT) – The Geary County Sheriff’s Office has confirmed that a second arrest has been made in the Enfinnity Hayes homicide. On Aug. 7, at 3:40 p.m., Jonathan Kendrick Franklin was transported to the Geary County Detention Center. He is charged with first-degree murder and conspiracy to commit first-degree murder. In January of […]
GEARY COUNTY, KS・2 HOURS AGO
KSNT News

LAWRENCE (KSNT) – An Ohio man wanted for a quadruple murder has been arrested in Lawrence. The Lawrence Police Department confirmed the arrest of Stephen Marlow, who is wanted in Ohio, for a quadruple murder. “Clear multiagency communication on a national and regional level, followed by proactive teamwork in our patrol department, and ultimately an […]
LAWRENCE, KS・1 DAY AGO
KSNT News

TOPEKA (KSNT) – One person is dead following a shooting in Topeka on Friday. The Topeka Police Department reported that at 3:05 p.m. on Aug. 5 at the Traveler’s Inn at 3846 SW Topeka Boulevard their officers responded to a shooting. A victim was found at the scene suffering from a gunshot wound. The victim […]
TOPEKA, KS・2 DAYS AGO

Police were called to Hardwicke Place around 11:30 a.m., according to Huber Heights Police Dispatch.
LAWRENCE, KS・2 DAYS AGO
KSNT News

Police looking for this Topeka man

TOPEKA (KSNT)– Police are looking for a Topeka man in connection to an Aggravated Battery. At 10:55 p.m. on Aug. 4th, Topeka Police arrived at St. Francis Hospital in response to reports of an individual who suffered from a non-life threatening gunshot wound. After investigation, it was determined that this incident was tied to the […]
TOPEKA, KS・2 DAYS AGO
KSNT News

TOPEKA (KSNT) – An investigation is underway after a Lansing Correctional Facility resident died. Lansing Correctional Facility confirmed over the weekend that Fred Patterson III, 56, died on Sunday, Aug. 7 at the facility. The facility is calling the death a homicide pending the results of an independent autopsy. The Kansas Department of Corrections and […]
LANSING, KS・4 HOURS AGO
KSNT News

UPDATE: I-70 westbound reopens after crash

UPDATE: I-70 was reopened at 2:45 p.m. Thursday afternoon. TOPEKA (KSNT) – I-70 westbound is closed between the 6th and 8th Street exits following a crash Thursday afternoon Aug. 4. According to authorities, a vehicle was merging from 10th Street when a black Nissan slowed to let them in, at that point, a Toyota Tacoma […]
TOPEKA, KS・3 DAYS AGO

JACKSON COUNTY (KSNT) – A Topeka man is behind bars after being arrested by the Jackson County Sheriff’s Office for taking a Volvo skid-steer loader and using a stolen trailer to do so. Brian Ray Stevenson, 50, was arrested by Jackson County deputies following an investigation that led them to the skid-loader on Butler Road […]
TOPEKA, KS・3 DAYS AGO
KSNT News

One arrested after triple stabbing in Junction City

JUNCTION CITY (KSNT) – Police arrested a 21-year-old man for stabbing a woman to death in Junction City. The murder happened around 2:30 a.m. Saturday on a cul-de-sac in the extreme northeast portion of the military community, close to Fort Riley. Police said the found three people with stab wounds: An adult male who was […]
JUNCTION CITY, KS・2 DAYS AGO
KSNT News

TOPEKA (KSNT) – A Topeka family who lost their home in a fire is struggling to get back on their feet. It’s been a month since a fire destroyed their mobile home at Lakewood Park. Since then, Annetta White and her three children have found a temporary place to stay, but they still need help. […]
TOPEKA, KS・2 DAYS AGO
KSNT News

CARBONDALE (KSNT) – Two people were taken into custody by the Carbondale Police Department during a domestic battery call on Monday. According to the CPD, officers and Osage County EMS were sent to the 500 bock of North 4th Street on Monday, Aug. 1, on reports of domestic battery. Upon arrival, the officers contacted the […]
CARBONDALE, KS・3 DAYS AGO
KSNT News

LAWRENCE (KSNT) – Human remains that were recovered near Lawrence in January earlier this year have been identified. Guy Wayne Collins, 47, a missing adult since July 9, 2021, has been confirmed to be deceased by the Douglas County Sheriff’s Office. A lab report from the Kansas Bureau of Investigation confirmed that DNA analysis of […]
LAWRENCE, KS・2 DAYS AGO
KSNT News

2 behind bars after mail theft investigation