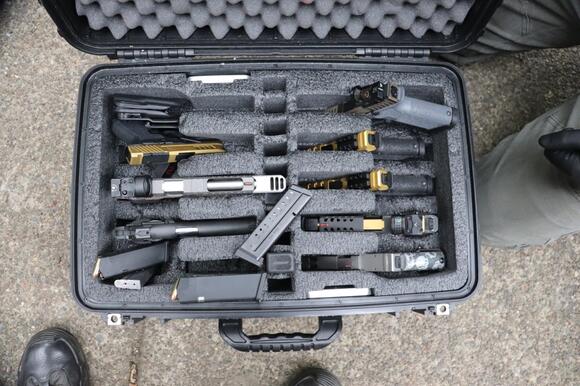 PORTLAND, Ore. ( KOIN ) — A number of firearms and firearm parts were seized from an illegal manufacturing operation in Springfield, officials said.

According Lane County Sheriff’s Office, deputies recovered more than 60 fully assembled firearms, dozens of homemade firearm suppressors and enough parts to assemble a hundred more firearms. All but five of the firearms were reportedly ghost guns, which are assembled without serial numbered parts.

Further, deputies said they found a commercial amount of methamphetamine and suspected fentanyl pills, along with some cocaine.

Andrew Rogers, 38, was arrested for Felon in Possession of a Firearm, Carrying a Concealed Weapon, Criminal trespass 2, Criminal Mischief 2 and Theft II.

imagine that I felon in possession of illegal firearms 🤷 this is what happens when you let trash out of jail and why I stay armed.

The notion that they will be able to control this is hilarious, And exactly the reason why gun control will not work

The body of Kaylee Birdzell, who the Washington County Sheriff's Office says was killed sometime either late July 31 or in the early morning hours of Aug. 1, was recovered days later in a landfill near Corvallis.
2 DAYS AGO
KOIN 6 News

A 15-year-old who was reported missing on Aug. 3 has been found.
ROSEBURG, OR・2 DAYS AGO
KOIN 6 News

A Colorado wildland firefighter working a wildfire in Douglas County died after being struck by a tree Wednesday afternoon, officials said.
DOUGLAS COUNTY, OR・2 DAYS AGO
KOIN 6 News

A man and his 2-year-old daughter were removed from a Frontier Airlines flight Sunday.
2 DAYS AGO

Oregon cities with the most expensive homes, according to Zillow

Stacker compiled a list of cities with the most expensive homes in Oregon using data from Zillow.
OREGON STATE・1 DAY AGO
KOIN 6 News

A small earthquake shook less than 100 miles off the Oregon Coast on Friday afternoon, according to officials.
1 DAY AGO
KOIN 6 News

PORTLAND, Ore. (KOIN) — Mookie Cook is once again a Duck. The Class of 2023 No. 4 prospect verbally recommitted to Oregon men’s basketball on Friday after rescinding his verbal commitment to the Ducks just a month and a half ago on June 29. “I’m going to the University of Oregon,” Cook told 247Sports. “They […]
EUGENE, OR・1 DAY AGO
KOIN 6 News

SEATTLE, Wa. (KOIN)– There are plenty of Oregon alums in the NFL, but the one that resides the closest to the Portland is Ugo Amadi in Seattle. The lone Duck on the Seahawks is heading into his fourth year in the league. “The game speed has slowed down, that’s the biggest thing, and as far […]
SEATTLE, WA・6 HOURS AGO