Smartwatch versus cycling computer: which is best for cyclists? 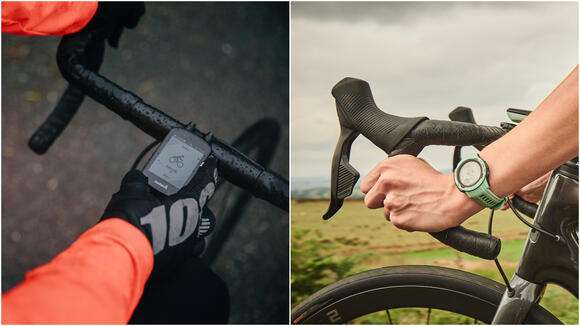 And while they pair with peripheral sensors like power meters, many now have an in-built heart rate monitor allowing you to do away with some extra equipment.

We have guides on the best cycling computers and best smartwatches for cycling , but how do you choose between these different types of devices? And which offers the best value for money for cycling?

The answer will likely depend on your priorities. Do you primarily require the mapping functions? Are you a multi-sport athlete looking for functionality across a range of activities? Is cost the driving factor?

Before diving into some detail to determine if a smartwatch or a cycling computer is the best choice for you, here are today's best Black Friday deals in both categories...

The most obvious, and perhaps significant, benefit of a smartwatch is its functionality across a range of activities. They are primarily designed for running and given that they’re worn on the wrist they also can be used for swimming, hiking or indeed any sport or activity where you can either wear a watch comfortably or would benefit from tracking performance.

Today’s smartwatches combine all the benefits of a regular fitness tracker, such as a FitBit or Apple watch, with the usual data you’d expect from a cycling computer like speed and distance travelled. A smartwatch will pair with additional sensors, so you can measure your effort using data derived from a power meter and a heart rate monitor , though most watches will have the latter inbuilt.

Wearing the watch on your wrist also delivers other benefits that a computer can’t offer so easily; it can track measurables such as your sleep, your breathing and even the oxygen levels in your blood. In short, when it comes to the sheer amount of data collection offered a smartwatch will generally outperform a cycling computer. This data can be incredibly useful for monitoring your recovery and avoiding overtraining .

The battery life of smartwatches has improved considerably in recent years. So much so that they now match or even outperform cycling computers. The Garmin Enduro smartwatch (£649.99), for example, uses a solar charging lens to help deliver a claimed 80 hours of use in GPS mode, while it says it will run for up to a year between charges in its lowest power mode.

Garmin’s just-released 1040 Solar cycling computer has a price tag that's more similar to the Enduro smartwatch (£629.99) and gives up to 100 hours in battery save mode – so a little cheaper and potentially a little longer lasting.

If you’re interested in saving a few watts then a smartwatch is likely to be aerodynamically superior. While today’s head units are designed to reduce drag, you’ll always be more aerodynamically efficient on a bike without a computer. Moving the GPS unit from the front of the bike to your wrist will aid this efficiency, although any gains will be marginal.

It’s also worth thinking about the location of your GPS device if you run handlebars that sit outside of today’s standards. For example, if you ride a classic road bike with 26.0mm diameter bars, you may have to buy an additional mount to accommodate this size. Equally, if you spend a fair amount of time on a TT bike or using tri bars then mounting a cycling computer might not be straightforward. A smartwatch presents none of these issues.

It’s a given that the size of the display screen will be smaller on a smartwatch compared to a head unit. How much of a drawback this is will depend on how you use it. If you’re cycling and focused on a single metric, such as speed, average speed or distance travelled, then the smaller screen may not present a problem.

A watch such as the Wahoo Elemnt Rival offers ‘perfect zoom’ allowing you to zoom in on one number. However, if you’re wanting to scroll between various metrics during your ride the smaller screen size, and the fact that it’s on your wrist, is likely to be more problematic.

The limitations of both the smaller screen size and the wrist location are most pronounced when considering the watch as a GPS unit. Here the limited display size really becomes an issue. Following a route on a smaller screen quickly serves as a reminder as to why head unit display screens are now far bigger than their predecessors.

Add in the complication of the smaller screen being mounted on your wrist and the smartwatch as a cycling computer becomes less desirable again. In simple terms, it’s not only hard to follow, it also requires you to take your eyes off the road and, often, your hand from the bars.

Unsurprisingly, a smartwatch is lighter than its head unit counterparts. The differences aren’t great however, perhaps 50-80 grams in favour of the watch. But, worn on the wrist, it’s likely that you’ll feel that weight whereas a 200g head unit attached to a mount isn’t noticeable when seen in context to the overall weight of the bike.

True weight obsessives may beg to differ, but unless you’re competing in a hill climbing championships, where competitors look to shave every possible gram from their bike and being, a watch on the wrist is worth two on the bars…or something like that!

Designed solely as a cycling computer, the modern head unit excels at displaying a variety of information in an easy to see package. Today’s models range in size from the larger display screen of a Garmin Edge 1040, which measures 3.5”, or a Hammerhead Karoo 2 at 3.2”, to the more compact screen of a Wahoo Elemnt Bolt , which is 2.2” in size. Even at the smaller end of the spectrum, they are generally considerably larger than a smartwatch screen, and thus easier to use when in motion.

The larger screen size of a dedicated head unit is perhaps best appreciated when using its mapping functions. Despite the improvements that smartwatches have made with regards to both display size and GPS functionality, there’s no comparison when viewed against a cycling computer.

In simple terms, they are easier to see and to follow, allowing you to navigate a route with confidence. If you do plenty of touring or bikepacking, or fancy exploring new areas on your bike, then a head unit is likely to be a better fit than a smartwatch.

Mounted out front of the bike’s handlebars, the head unit can be viewed comfortably and without negatively impacting your concentration. It’s an optimum position for following maps as well as checking other data. Naturally, if you need to move from one function to another you’ll need to remove your hand from the bars, but compared to checking a watch on your wrist while in motion, it’s a far safer proposition.

While a cycling computer’s singular purpose has its benefits, such as larger screen size and a design optimised for handlebar mounting, it can’t compare to a smartwatch when it comes to multi-use functionality. Of course you could go running with a head unit, either holding it or storing it in a pocket, but it's unlikely to deliver the comfort and performance needed for it to be worthwhile.

This singularity extends to the range of functions a cycling computer offers. If it’s just cycling data you require then a cycling computer will provide this information and will normally do so in a functional and easily digestible way. However, compared to a device that can be worn night and day, it comes in second best.

While today’s head unit’s have become more expansive in the data collected and subsequently their ability to track your body’s stress for example, they just aren’t as straightforward or intuitive as a unit that sits on your wrist.

Both cycling computers and smartwatches come in a wide range of models, with prices to match.

An entry-level head unit, such as the Garmin Edge 130 Plus is under £200, while a ‘basic’ smartwatch like the FitBit also costs less than £200.

At the other end of the scale, there is again parity: a Garmin Fenix 6 Solar will set you back around £650, while its new Edge 1040 Solar head unit retails at £630.

In between the two extremes, there’s some similarity too, but this is the price point where head units perhaps give you more for your money. Hammerhead’s high-performing Karoo 2 costs a little over £350, while Wahoo’s redesigned and still dependable Elemnt Bolt has an RRP of £265. Comparable watches, like the Wahoo Elemnt Rival are closer to £300, while Garmin’s Enduro smartwatch costs over £600.

However, it’s important to note that while you’ll need to buy an additional heart rate monitor to pair with your head unit (should you want it of course), a smartwatch will have this function built-in.

So, which is better value?

In many ways, value becomes a relative term when comparing smartwatches with head units. While it’s not quite apples versus oranges, there is enough difference between the two options to make a comparison largely subjective. If you only cycle, then a head unit will win out every time.

Likewise, if navigating new routes and unknown regions of a country is top of your list, the bigger screen size and superior mapping functions that a head unit delivers will tip value scales in its favour.

However, if you’re not only a cyclist but also a runner, then the dial on the scales will begin to head in the other direction. A smartwatch offers adaptability across activities that a cycling computer can’t, and isn’t designed to, match. Equally, if you’re looking to track your fitness around the clock, a watch that sits on your wrist is going to be able to collect lots of data that your head unit can’t.

So is a smartwatch better value than a cycling computer? The answer is still likely to be a no. Even if you’re looking for something to work across a range of sports, you probably won’t want to forgo the ease of use of a head unit when it comes to your cycling. Simply put, they’re fit for purpose in a way that a smartwatch can’t match.

Read our full review of the Garmin Edge 530 here, and find our guide to the best cycling computers with options at different price points here.

You can hop over to our guides to all the best cycling computers and the best smartwatches we've reviewed just over here, if you want to read more.

With a large wraparound lens, Tifosi’s Rail sunglasses provide excellent protection from debris - as well as an up-to-date look
5 DAYS AGO
Cycling Weekly

All of the features of the top Fenix and Forerunner watches but with an enhanced AMOLED display - which makes it more expensive, but it's worth it
3 DAYS AGO
Cycling Weekly

A floor pump that's easy to find, attach and inflate your tires on whatever bike you want
4 DAYS AGO
Cycling Weekly

Good-looking bag with enough capacity for day rides but can we please have something better than straps to mount it?
11 DAYS AGO
Cycling Weekly

'I'm studying maths – my brain needs something else besides cycling': Thomas Gloag on his hunger for learning on and off the bike

Crankbrothers Candy 1 pedals review - gravel doesn't have to be grey

The pedal that gives you a generous platform, excellent mud shedding and a little colour on your ride
5 DAYS AGO