InsideTheMariners brings you the latest news, highlights, and analysis surrounding the Seattle Mariners.

From Unknown to Invaluable, Penn Murfee Has Been Integral Piece of Mariners' Pitching Staff 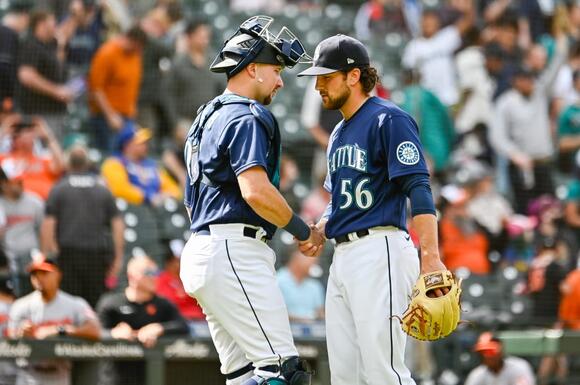 Penn Murfee has gone from a forgotten prospect to one of baseball's 50 best relievers in 2022. Let’s take a look at what has made the Mariners righty so effective.

One of the most underrated stories of the 2022 season has been right-handed pitcher Penn Murfee. From a forgotten prospect, to Team USA, to one of the Mariners' most reliable relievers—Murfee has been a revelation in Seattle.

As a 33rd-round draft pick, expectations are usually not very high. Many players drafted that low may find themselves out of baseball within a year or two, fizzling out before Double-A.

In fact, in light of the recent reduction of the minor league circuit, the draft has now been shortened to just 20 rounds. As such, many players of Murfee's pre-draft status are not even being given the opportunity to develop nowadays, which is a shame considering the 28-year old's remarkable journey to this point.

Seattle held on to Murfee through all the ups and downs of a 33rd-rounder and his perseverance has paid off. He likely saved his spot in the organization back in 2019, posting a 3.07 ERA while averaging 10.69 strikeouts per nine innings over 20 starts at the High-A level before making brief appearances in Double-A and Triple-A.

Later that year, Murfee's success allowed him to pitch in the Arizona Fall League and for Team USA in the Premier 12 tournament. Fast-forward three years and Murfee is now a big-leaguer, with his first appearance coming on April 29 against the Marlins in Miami.

The right-hander has been nothing short of spectacular ever since, filling the role that Casey Sadler often held last year. Manager Scott Servais calls upon his “pivot man” often; it is an important role to pass the baton to the back-end guys like Paul Sewald and Diego Castillo.

Murfee relies heavily on a four-seam fastball paired with a slider that has been dominant all season long. His slider has roughly 32 percent more horizontal break than average and six percent more vertical break. Alike Sewald last year, this pitch has been devastating on both lefties and righties, with an expected batting average of .111 and expected slugging percentage of .167.

His Baseball Savant page is red all over, as he ranks at or near the top of almost every important category.

Murfee has never had this much success before in the minor leagues, but his advanced numbers back up his performance. Against all odds, he has arguably become the most productive reliever in Seattle’s bullpen this season.

InsideTheMariners brings you the latest news, highlights, and analysis surrounding the Seattle Mariners.