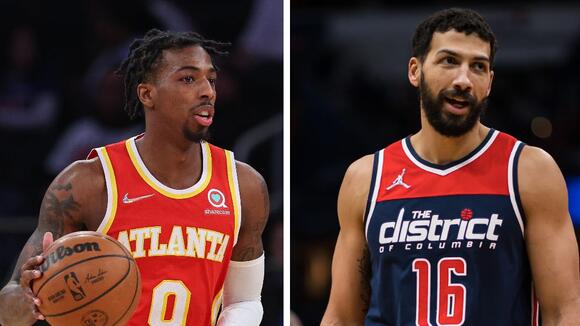 The Wizards added some much needed guard depth by signing Delon Wright, previously of the Atlanta Hawks, to a two-year, $16 million deal on Thursday.

Wright, who has played for six other NBA teams, is known for his reliable defense and is likely to back up Monte Morris, whom the Wizards traded for on Wednesday, at point guard. Wright is a former first-round pick as the 20th overall selection by the Toronto Raptors in 2015.

The Wizards are also bringing back forward Anthony Gill on a two-year deal. As a restricted free agent, the Wizards extended Gill a qualifying offer earlier this week.

In 44 games this season, Gill averaged 4.1 points and 1.9 rebounds while shooting 56.9 percent from the field and 53.8 percent from three. After college ball at Virginia, Gill played in the EuroLeague prior to joining the NBA, with stints in Turkey and Russia from 2016 to 2020.

A strong locker room presence, Gill is one of the more popular players on the roster.

Gill can also play center, which could prove pivotal with the Wizards expected to lose Thomas Bryant to free agency.

Here's a quick glimpse at how the Wizards' depth chart is shaping up:

The Celtics employee with whom Ime Udoka had an affair helped make all his travel arrangements ... and that job sometimes included organizing travel for his fiancee, Nia Long. Sources connected to the couple and the NBA franchise tell TMZ ... one of the staffer's duties included planning Udoka's team-related travel, and we're told she was also involved in booking travel for Nia to come to Boston or to road games.
BOSTON, MA・1 DAY AGO
106.7 The Fan

Time for Commanders to scout coaches

Ron Rivera and company have failed. As a front office and coaching staff. It’s time to start thinking of who’s next, because Year 3 of this regime has seen no improvement of the Washington Commanders.
WASHINGTON, DC・3 HOURS AGO