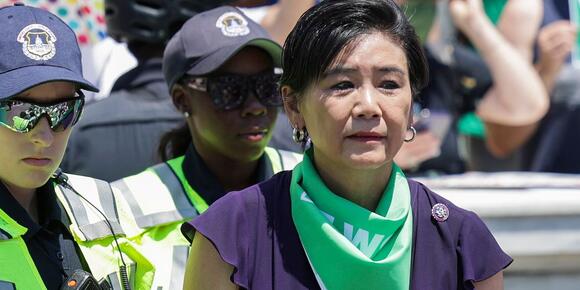 Rep. Judy Chu (D-Calif.) was arrested Thursday for participating in an abortion rights protest outside the U.S. Capitol in the wake of the Supreme Court’s decision to overturn the landmark 1973 Roe v. Wade decision.

Chu was among 181 people the Capitol Police arrested for “for blocking the intersection of Constitution Avenue, NE and First Street, NE,” which is also near the Supreme Court.

“When I think of all these women — and more — the decision to join in a peaceful demonstration to make clear we will not allow the clock to be rolled back on abortion rights was easy,” Chu said in a statement. “We are in this together and we will not back down or be silenced.” 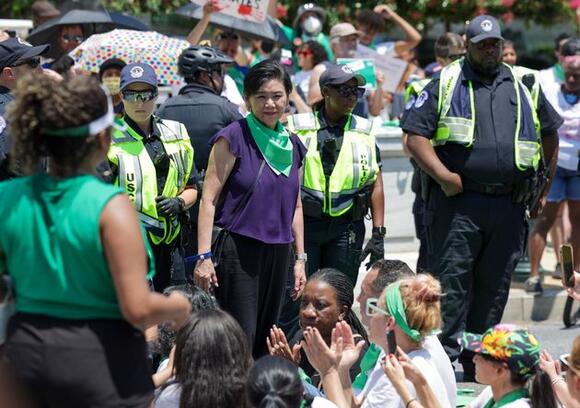 U.S. Rep. Judy Chu (D-Calif.) is detained by U.S. Capitol Police for participating in a protest outside the U.S. Supreme Court on the last day of their term on June 30, 2022 in Washington, DC.  (Photo: Kevin Dietsch via Getty Images)

The protest was organized by the Center for Popular Democracy Action and Planned Parenthood Action Fund, according to The Washington Post . It comes nearly a week after the high court delivered its verdict on the Dobbs v. Jackson Women’s Health Organization, a case centered around a Mississippi law banning abortion at 15 weeks.

The justices decided to overturn both Roe and a subsequent case, Planned Parenthood v. Casey, effectively taking away Americans’ constitutional right to an abortion.

Activists and Democratic lawmakers are pushing for other steps to protect abortion rights.

“Every major right we have in this country — voting or women’s rights — came about because of protests,” Chu told the Post in an interview. “That is what changed things in America for the better.”

Chu sponsored the Women’s Health Protection Act , which would codify access to abortion. While the bill cleared the House in September 2021, it failed in the Senate .

President Joe Biden on Thursday said he supports an “exception” to the filibuster for codifying Roe, which Democrats, including Chu, have been calling for.

“I believe we have to codify Roe v. Wade into law and the way to do that is to make sure Congress votes to do that,” Biden told reporters in Madrid, where he was attending a NATO summit.

“And if the filibuster gets in the way — it’s like voting rights — we should be requiring an exception to the filibuster for this action to deal with the Supreme Court decision,” Biden continued.

Meanwhile, the fight on abortion has moved to the states. A Florida judge on Thursday decided to block a controversial 15-week abortion ban , saying it “violates the privacy provision of the Florida constitution.”

The House Speaker says there's one key factor that can help her party buck history.
CONGRESS & COURTS・1 DAY AGO
HuffPost

WASHINGTON ― Donald Trump asked the Supreme Court on Tuesday to block prosecutors from proceeding with their review of classified documents seized from his Mar-a-Lago social club this summer. The former president, who attempted a coup to remain in power after losing reelection, is appealing a unanimous, three-judge decision...
PRESIDENTIAL ELECTION・13 HOURS AGO
HuffPost

In Stewart Rhodes' sedition trial, prosecutors say the extremist leader wanted to use the Insurrection Act to justify an armed invasion of the Capitol.
WASHINGTON, DC・13 HOURS AGO

Cody Keenan, who was chief speechwriter for former President Barack Obama, has offered what he believes is a surefire way for Democrats to combat Donald Trump. Humor is the key to riling the twice-impeached, one-term and notoriously thin-skinned former president, Keenan suggested on the latest episode of Mediaite podcast “The Interview.”
POTUS・1 DAY AGO
HuffPost

Rep. Matt Gaetz was one of several House Republicans who voted against a resolution to allow FEMA to use up to $15 million in the Disaster Relief Fund.
FLORIDA STATE・2 DAYS AGO
HuffPost

The former Army combat medic never disclosed she was working for Florida's government, one migrant said.
FLORIDA STATE・1 DAY AGO

"I just love the idea that Trump wants to prove in court he's not an insurrectionist, racist, Russian-lackey or that he shares some traits w/Hitler," one tweet reads.
POTUS・1 DAY AGO
HuffPost

George Conway predicted “the reckoning is finally coming” for Donald Trump. The former president “is in a downward psychological, emotional and physical spiral” and “in all likelihood” will soon “be convicted of multiple felonies,” the conservative attorney said in a lengthy interview with Salon published Monday.
POTUS・1 DAY AGO
HuffPost

Seth Meyers has had it with Republicans defending former President Donald Trump. The “Late Night” host took aim at Sen. Rick Scott (R-Fla.) on Monday after the conservative lawmaker paraded out a series of lame excuses on CNN about Trump’s attack on Senate Minority Leader Mitch McConnell and his wife, Elaine Chao.
POTUS・1 DAY AGO

Many Michigan Republicans Don't Seem Very Into Their Nominee For Governor

Tudor Dixon, the party’s nominee for governor, had the smallest contingent of visible allies, judging by the campaign apparel that people wore to the Michigan rally.
MICHIGAN STATE・2 DAYS AGO
HuffPost

The former president's legal team “made the mistake of using a word that they have not used before," said "The Last Word” anchor.
POTUS・2 HOURS AGO
HuffPost

President Joe Biden arrived in Puerto Rico on Monday to survey the damage from Hurricane Fiona and announce more than $60 million in additional funding to help the U.S. territory prepare for future storms, which are only expected to become stronger and more frequent with climate change. “Somehow the people...
POTUS・1 DAY AGO
HuffPost

From tech companies to Merrick Garland to Anthony Fauci, the list of investigation targets for the House GOP is long.
CONGRESS & COURTS・12 HOURS AGO

In Merrill v. Milligan, Alabama asked the court to overturn 40 years of precedent. But both liberal and conservative justices questioned the state's argument.
ALABAMA STATE・14 HOURS AGO
HuffPost

The Florida governor wore campaign gear this weekend at Ian visits and falsely claimed the storm’s ground zero was not “even in the cone” three days out.
FLORIDA STATE・1 DAY AGO
HuffPost

At the heart of both cases is Section 230, which protects tech companies from being held legally liable for what users post or see because of an algorithm.
CONGRESS & COURTS・20 HOURS AGO