9-year-old gets praise for his life-saving action 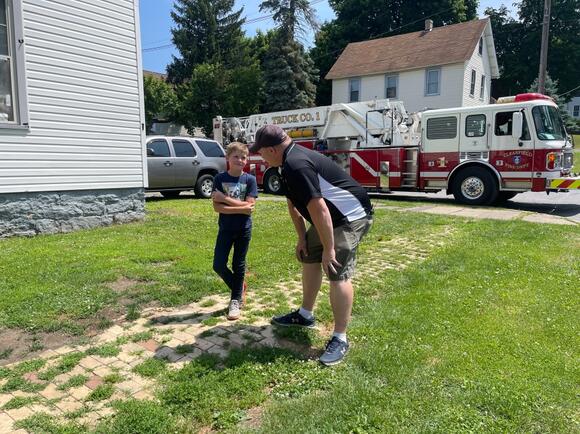 “I’m always making it,” the 9-year-old said while playing basketball in his backyard.

He’s out in the sun and even in the snow.

“I get like ice cold and I am still running around in it,” he smiled.

At the end of last month, Cooper, per usual, was outside playing football with a friend when he noticed something wrong.

“I saw smoke come out of the window and then it was a fire,” Cooper explained. “So I screamed ‘fire, fire’ and I ran back and told my dad and he called 911.”

“I was in the back yard splitting wood,” Tyler Best, Cooper’s dad, said. “He came out and was like, ‘dad there is a fire across the street!'”

In a situation where seconds matter, Cooper acted fast. Inside the home that caught fire, which is now surrounded by yellow caution tape, was his neighbor trapped inside.

“Then the neighbors up there said there was a lady upstairs,” Tyler told us. “So I hurried up and got a hold of someone else who came and helped me and we kicked in the door and we went up and tried to get her.”

If it wasn’t for Cooper’s quick thinking, the outcome could have been tragic.

It’s a day the 9-year-old and his little sister, Piper, will never forget.

His good deed continues to get praise. Cooper was just recently given the outstanding community member award for making a positive impact in Clearfield Borough.

“That’s why we wanted to honor Cooper especially,” Stephanie Tarbay, Clearfield Borough Council President, said. “To make sure that people know that there are good things happening in Clearfield.”

The Clearfield Fire Department said if Cooper would not have seen the fire, we could have an entirely different story. They thank him for everything he did that night.

“All of us down at the fire company are very proud of him,” Andrew Smith, Clearfield Fire Department Fire Chief, said. “We look forward to him joining us maybe here when he turns 16.”

Cooper said that one day he wants to be a firefighter.

“Because you can save people’s lives,” Cooper explained.

It’s hard to tell what would’ve happened if Cooper wasn’t outside playing that day, but what we can tell is that this future firefighter is well on his way to saving many more lives.

Reach out to Maggie Smolka if you know someone or an organization that’s making it matter in the community. You can email msmolka@wtajtv.com or message her on Facebook .

Finally a good news article in our area. Little man did an awesome job. Kids today are stuck on their phones or game systems so this is nice to hear.

BLAIR COUNTY, Pa. (WTAJ)– A disturbance at a nursing home before getting a truck stuck in someone’s yard, all while being drunk, has led to charges for an Altoona man, according to police. Tyrone Borough police were called to Epworth Manor along Washington Avenue at 3:15 a.m. on Friday morning for a report of a […]
ALTOONA, PA・19 HOURS AGO
WTAJ

SOMERSET COUNTY, Pa. (WTAJ) — Two men are facing charges and and a third is wanted after state police say they were caught stealing copper wire from a business in Somerset County. Troopers were sent to the 300 block of Stonycreek Street in Boswell Borough at 4:43 a.m. Friday after it was reported two men […]
SOMERSET COUNTY, PA・16 HOURS AGO
WTAJ

CAMBRIA COUNTY, Pa. (WTAJ) — A Johnstown man is sitting in jail after multiple alleged incidents — two shootings in Johnstown and a police pursuit in Altoona. Devine Steven Andre Edwards, 28, is accused of stirring up trouble this year starting in June when Johnstown police were told he shot at an unknown man who […]
JOHNSTOWN, PA・22 HOURS AGO

CLEARFIELD COUNTY, Pa (WTAJ) – State police are investigating after a body was found in the Susquehanna River. The body was found on Thursday, August 12 in the West Branch of the river near Curwensville. According to Clearfield County Coroner, Kim Shaffer Snyder, an autopsy has been scheduled for Saturday, August 13. No further information […]
CURWENSVILLE, PA・13 HOURS AGO
WTAJ

Altoona man breaks into home, assaults man in his sleep

ALTOONA, Pa (WTAJ) — An Altoona man is behind bars after police were told he broke into a family’s home and assaulted a man before taking off on a pedal bike. Timothy Schwartztrauber, 31, has been arrested and charged for punching a man who he believed was having sex with a 15-year-old girl, according to […]
1 DAY AGO
WTAJ

CENTRE COUNTY, Pa. (WTAJ) — For the third and final Ag Progress day this year, people from across Pennsylvania are celebrating 100 and 200 years of running their family-owned farms. “I love getting up in the morning and going to work,” said Betty Jacobus, owner of Logan Spring Farm in Blair County. Jacobus has 95 […]
BLAIR COUNTY, PA・1 DAY AGO
WTAJ

CAMBRIA COUNTY, Pa. (WTAJ) — An event to benefit cat rescues is being held in Cambria County Saturday, Aug. 13. The event will take place from 11 a.m. to 7 p.m. at the Get “ER” Done tattoo shop in Northern Cambria. According to their Facebook page, they will be doing flash art cat-inspired tattoos to […]
CAMBRIA COUNTY, PA・17 HOURS AGO

BLAIR COUNTY, Pa. (WTAJ)– Charges have been filed against an Altoona man after he smacked a woman across the face causing her to drop a 3-month-old child she was holding during an argument, police report. On Friday, Aug. 5, Altoona police were called to the 2000 block of 5th Avenue for a report of a […]
ALTOONA, PA・2 DAYS AGO
WTAJ

CAMBRIA COUNTY, Pa. (WTAJ) — Props, costumes and masks were stolen from a warehouse at the former Cresson State Prison. The props were set to be used for an upcoming haunted house exhibit. On Saturday, July 30, co-creator of Imaginarium Sanitarium Ryan Rader noticed shattered glass and missing items when he visited the warehouse that […]
2 DAYS AGO

DUBOIS, Pa. (WTAJ) — A Brockway man was arrested after police said he led them on a high-speed chase before ditching the motorcycle and trying to flee on foot. Alexander Ross, 35, was taken into custody after a 20-minute chase with police on Aug. 10 that led them through multiple townships that ended in DuBois. […]
DUBOIS, PA・1 DAY AGO
WTAJ

CLEARFIELD COUNTY, (WTAJ) – The Clearfield County commissioners approved the borrowing of two million dollars to pay for renovations at the Clearfield County Jail. It was announced on Thursday, August 11 that the money will go towards work being done on the framework of the roof and replacing water lines. The project will also work […]
CLEARFIELD COUNTY, PA・1 DAY AGO
WTAJ

CENTRE COUNTY, Pa. (WTAJ) – Confusion over a Chester Hill bridge continues as officials are unsure what will happen to the historic bridge. Built in the 1940s, the Presqueisle Street bridge has been closed for the past three years due to safety concerns. Previously the bridge was used by community members to travel between Chester […]
CENTRE COUNTY, PA・19 HOURS AGO
WTAJ

JEFFERSON COUNTY, Pa. (WTAJ) — A Jefferson County man is facing charges after being accused of inappropriately touching a young girl numerous times, according to state police. Dale Neill, 74, of Sigel, is facing numerous charges of indecent assault, including felony counts of indecent assault of someone under 13. According to police, they were called […]
JEFFERSON COUNTY, PA・2 DAYS AGO
WTAJ