Bill Gates wins legal approval to buy huge swath of North Dakota farmland worth $13.5M after outcry from residents who say they are being exploited by the ultra-rich

Bill Gates has secured legal approval for the controversial purchase of thousands of acres of prime North Dakota farmland, after the deal drew fury from the state's residents.

The state's Republican Attorney General Drew Wrigley had inquired into the land sale, and on Wednesday issued a letter saying the transaction complied with an archaic anti-corporate farming law.

The Depression-era law prohibits corporations or limited liability companies from owning farmland or ranchland, but allows individual trusts to own the land if it is leased to farmers, which Gates intends to do.

Gates is the largest private owner of farmland in America after quietly amassing some 270,000 acres across dozens of states, according to last year's edition of the Land Report 100, an annual survey of the nation's largest landowners. 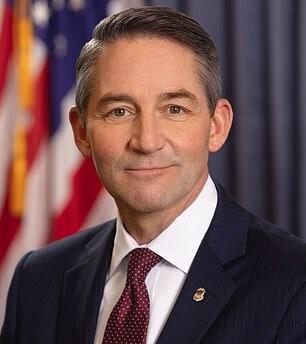 However, the billionaire's holdings make up only about one percent of the nearly 900 million total farm acres in the U.S.

The purchase of the land in North Dakota had raised legal questions as well as concerns that ultrarich landowners do not share the state's values.

About 2100 acres of land were sold in the deal, AgWeek reported.

In a curious move, the Campbell family in February filed a partnership name certificate with the North Dakota secretary of state naming their farming operation the Red River Trust - the same name as Gates' firm.

But an attorney for Gates' firm wrote to the attorney general´s office that the Campbells registered the name without his knowledge.

The Campbells did not immediately respond to a request for comment.

North Dakota's Agriculture Commissioner, Republican Doug Goehring, previously said that many people feel they are being exploited by the ultra-rich who buy land but do not necessarily share the state's values.

'I've gotten a big earful on this from clear across the state, it's not even from that neighborhood,' Goehring told KFYR-TV. 'Those people are upset, but there are others that are just livid about this.'

Corporations are exempted from the ownership ban if the land is necessary 'for residential or commercial development; the siting of buildings, plants, facilities, industrial parks, or similar business or industrial purposes of the corporation or limited liability company; or for uses supportive of or ancillary to adjacent non agricultural land for the benefit of both land parcels,' the law reads.

It's not the first test for a statute that was passed in 1932.

A federal judge in 2018 ruled the law constitutional after a conservative farm group argued that it limits business options for producers and interferes with interstate commerce by barring out-of-state corporations from being involved in North Dakota's farm industry.

The Republican governor stayed down the middle when asked his opinion of the anti-corporate farming law, which he and the Legislature expanded in 2019 to allow second cousins in the mix of ownership.

'The governor strongly supports family farms and is open to discussions about cutting red tape that puts North Dakota farmers at a disadvantage compared with neighboring states and ensuring that our ranchers and farmers can succeed and grow their operations, helping rural communities to thrive,' Burgum spokesman Mike Nowatzki said.

But even then, Gates didn't rank in the Top 100 of private landowners overall in the U.S. - when considering owners of land of all types, not just agricultural.

Gates also reportedly shopped for 'hundreds of acres of farmland' in Turkey while vacationing aboard a superyacht last November.

He allegedly wanted to create a large sustainable farm in country. It is unclear if he ended up purchasing the land.

Enough money can just about make anything happen. Gates is buying up our farmland to force us to eat fake meat. He needs to go bye bye-bye forever.

Oh I see, Gates wants to raise up a generation of share croppers...... AKA: peasants or serfs ...... Working his lordship's estates for a tiny percentage of the harvest.... Yeah, this is the American way , eh..???

What is he going to do with the land? Why does he want that particular parcel? I’d trust him as far as I could throw him!

British gap year student, 19, who was paralysed by 2,000lb bison on trip to South Dakota may be left stranded in the US 'because her health insurance provider plans to withdraw support'

A British student who was paralysed after a 2,000lb bison gored her and tossed her 15ft in the air may be left stranded in the US after her health insurance said it will withdraw support. Amelia Dean - known as Mia - was travelling in South Dakota during a gap...
HEALTH・4 HOURS AGO
WashingtonExaminer

Social Security payments: Millions of SSI recipients to get two checks worth up to $1,652 next month

Supplemental Security Income recipients will be getting not one, but two payments in September 2022, totaling to $1,652.
PERSONAL FINANCE・4 DAYS AGO
americanmilitarynews.com

US loses half its fighter jets, tons of warships in China war game

American military strategists are actively gaming U.S. military response scenarios to a potential Chinese invasion of Taiwan by 2026. The wargames have already found that the U.S. would have to lose more than 900 fighter jets — up to half of its fighter jet fleet — and a large number of U.S. warships to turn back China, a new report revealed Monday.
MILITARY・1 DAY AGO
GOBankingRates

Stimulus Updates To Know for August 2022

In 2020 and 2021, American consumers and businesses alike were flooded with various forms of stimulus in an attempt to keep the economy stable during the worst of the coronavirus pandemic. Since then,...
GAS PRICE・1 DAY AGO

REVEALED: Facebook turned over to cops the private chats between Nebraska mom and her 17-year-old daughter that outlined their plan to carry out at-home abortion and 'burn the evidence'

Facebook turned over chats between a Nebraska mom and her 17-year-old daughter discussing preparations for the teen's at-home abortion. Meta, the social media giant's parent company, turned over the direct messages as part of an investigation into the teen's illegal abortion, court documents show. The investigation was launched in April,...
NEBRASKA STATE・20 HOURS AGO
Daily Mail

UAE overturns three-year prison sentence for US lawyer of slain journalist Jamal Khashoggi and instead fines him $1.36 million and orders deportation for money laundering and tax evasion

The United Arab Emirates today overturned a three-year prison sentence for an American lawyer who had represented slain Saudi journalist Jamal Khashoggi. Instead, Virginia-based lawyer Asim Ghafoor will be fined $1.36 million and deported from the UAE, one of his lawyers said. Ghafoor, who had represented Khashoggi before he was...
WORLD・8 HOURS AGO
Daily Mail

Miami has paused plans to dump more than 100 homeless people into an encampment next to the wealthiest zip code in America after an uproar from residents. Fisher Island locals demanded authorities find another place to lump them after proposals were etched out for a series of 'tiny homes' on Biscayne Bay island.
MIAMI, FL・2 DAYS AGO
Daily Mail

Lean times ahead! Families cut down on beef and chicken to save money with a quarter of adults now eating less meat

One in four adults are eating less meat to try and save money, a survey has found. It comes after a study by the Office for National Statistics revealed that millions of households are reducing the amount they spend on essentials, such as food, and car journeys. Around 70 per...
2 DAYS AGO

WASHINGTON, Aug 10 (Reuters) - China's war games around Taiwan have led Biden administration officials to recalibrate their thinking on whether to scrap some tariffs or potentially impose others on Beijing, setting those options aside for now, according to sources familiar with the deliberations.
FOREIGN POLICY・27 MINUTES AGO