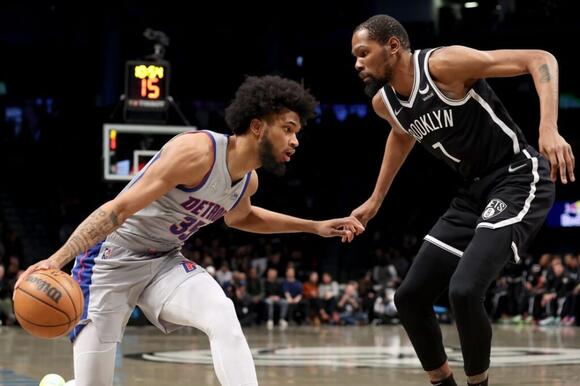 After more than three seasons with the Sacramento Kings, the restricted free agent was traded to the Pistons last season, where he played 18 games, averaging 14.6 points and 6.8 rebounds.

Sacramento selected Bagley as the No. 2 overall pick in the 2018 NBA draft after one year at Duke, but his time with the Kings was rough.

He missed 20 games in his rookie season due to knee issues and was limited to 13 games the next after sustaining a fracture in his right thumb before the remainder of the season was postponed due to the COVID-19 pandemic.

WATCH: Zion Williamson already doing his thing in first game since May of 2021

Robert Sarver’s sale of the Phoenix Suns is not expected to be complete for 6-9 months after the embattled owner
PHOENIX, AZ・14 HOURS AGO
Sportsnaut

Minnesota Timberwolves center Karl-Anthony Towns was so ill last week with a throat infection that he was hospitalized on bed
MINNEAPOLIS, MN・1 DAY AGO
Sportsnaut

Toronto Raptors guard Malachi Flynn is recovering from a broken left cheekbone. He sustained the injury during the third quarter
NBA・49 MINUTES AGO

It’s never too early for our first 2023 NBA mock draft. With the 2022 iteration in the books, all eyes
NBA・14 HOURS AGO
Sportsnaut

The Los Angeles Clippers moved to 2-0 in the NBA preseason after their 102-97 win over Portland. Stars Kawhi Leonard
LOS ANGELES, CA・2 HOURS AGO
Sportsnaut

Edgerrin “Jizzle” James Jr., a four-star point guard prospect in the Class of 2023, committed to play for Cincinnati on
CINCINNATI, OH・14 HOURS AGO
Sportsnaut

Washington Commander rookie running back Brian Robinson has been cleared to finally return to practice. A little over a month
PULLMAN, WA・1 HOUR AGO

After a disappointing end to their faint wild-card hopes, the Milwaukee Brewers will have to regroup against Arizona ace right-hander
MILWAUKEE, WI・1 DAY AGO
Sportsnaut

The quarterback matchup will be Drake Maye versus Tyler Van Dyke, and maybe Jake Garcia. Maye, who leads the ACC
CHAPEL HILL, NC・13 HOURS AGO
Sportsnaut

Guardians set to complete playoff tuneup in game vs. Royals

Heading into a three-game series in Kansas City on Sept. 5, the Cleveland Guardians had lost five straight games and
CLEVELAND, OH・4 HOURS AGO