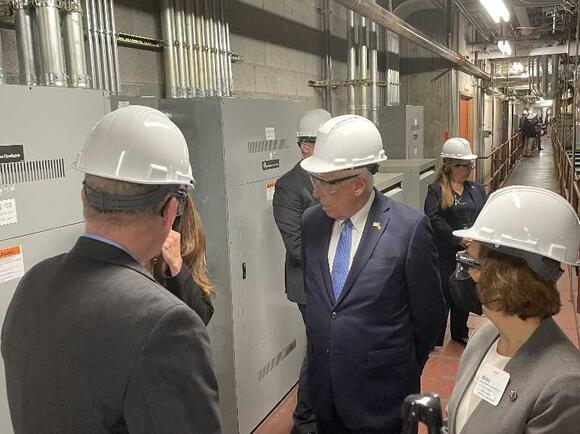 Bonamici brought Hoyer to visit Analog Devices' facility off Southwest Murray Boulevard and Jenkins Road during his tour across the state, she said, to show her support for Analog Devices and the semiconductor industry.

"When I go to a place with a member of Congress, I can tell what they think is important," said Hoyer, a Democrat who has represented a House district in Maryland since 1981.

After the tour, Hoyer highlighted his work on the Make It in America plan, which Congress launched in July 2010 to promote U.S. manufacturing and increase private sector jobs.

The pandemic has highlighted even further that the U.S. needs to "make it in America," he said, because so much international production was interrupted by COVID-19. Semiconductor manufacturing is especially important because Americans rely so much on the chips for daily life.

"This is about making America better, more resilient, more economically competitive and more secure as a nation," Hoyer said.

"Having control of our supply chain I think is really, really important," he said.

Analog Devices is expanding its Beaverton facility, too, which is the Massachusetts-based company's largest factory already. About 700 employees work at the site now, and Analog Devices plans to increase that by 40% in two years. 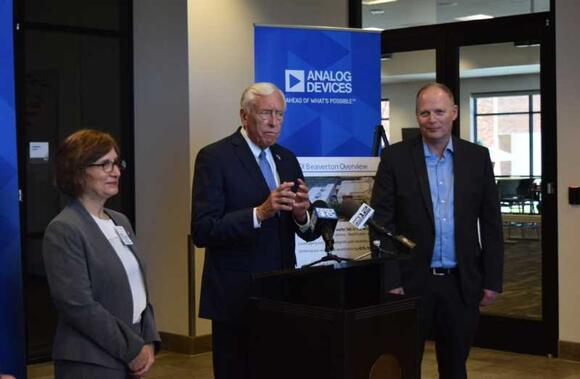 Daniel Burlingame, general manager of the Beaverton facility, said the company is also building out 25,000 square feet of space in the facility — previously used for backup equipment and storage — into more space for manufacturing.

This additional space, Burlingame said, will be able to essentially double the facility's capacity because of its modern and efficient design, even though it's just a quarter the size of what Analog Devices already has.

Bailey said it's important for state and federal officials to visit semiconductor manufacturing facilities in person, and he was excited to give Bonamici and Hoyer the tour Thursday. Oregon Gov. Kate Brown also toured the facility back in March, he said.

"Doing these firsthand visits are really, really important," Bailey said. "So, when they go back and advocate for us … you know they really know what we do here."

President Joe Biden surprised viewers Friday when pausing his speech to acknowledge a woman in the crowd he said he knew when she was 12. “You gotta say hi to me,” Biden said during a speech at the National Education Association headquarters in Washington, D.C. “We go back a long way. She was 12 — I was 30. But anyway, this woman helped me get an awful lot done.”
WASHINGTON, DC・3 DAYS AGO
BGR.com

A Melissa’s potatoes product was hit with a recall because it contains eggs, and the ingredient is not listed on the label. Potatoes alone do not contain traces of egg, but the Melissa’s Dutch Red Potatoes recall covers a product that ships with Dijon Mustard Sauce. The sauce is the likely culprit here.
ARIZONA STATE・1 DAY AGO
The Independent

The recipient of an outgoing phone call made from the White House switchboard to January 6 rioter was a New York man who spent approximately 10 minutes inside the Capitol that day.According to CNN, the nine-minute call was placed to a mobile phone belonging to Anton Lunyk, a 26-year-old supporter of former president Donald Trump who travelled to Washington from Brooklyn, New York, and attended the “Stop the Steal” rally at the Ellipse which immediately preceded the attack on the Capitol.In April, Lunyk was sentenced on charges that he’d entered and illegally demonstrated inside the Capitol, which had been...
PROTESTS・17 HOURS AGO
CNN

The migrant had been living on the streets of San Antonio, Texas, for nearly a month when he met a woman named "Perla" who made a compelling offer.
SAN ANTONIO, TX・1 HOUR AGO