As expected, the Detroit Pistons have reached an agreement with their lone restricted free agent.

The Pistons re-signed 23-year-old big man Marvin Bagley III to a three-year, $37.5 million contract Thursday, league sources confirmed to the Free Press, on Day 1 of NBA free agency . The deal is fully guaranteed with no options on either side.

The Pistons later Thursday agreed on a deal with free agent forward Kevin Knox II , and now have roughly $9 million in available cap space remaining. They have 15 players on the roster.

Bagley, who arrived from Sacramento at the 2022 trade deadline for Trey Lyles, Josh Jackson and picks, made a strong impression last season and is now positioned for a large role next season.

In 18 games after the trade, Bagley averaged 14.6 points and 6.8 rebounds on 55.5% shooting — the best percentage of his career, had it been a full season. He quickly found chemistry with the Pistons young guard duo of Cade Cunningham and Killian Hayes, and made it clear he feels comfortable in Detroit after a tumultuous start to his career with the Sacramento Kings.

TARGETS: Pistons in NBA free agency 2022: Here are the 8 names to watch 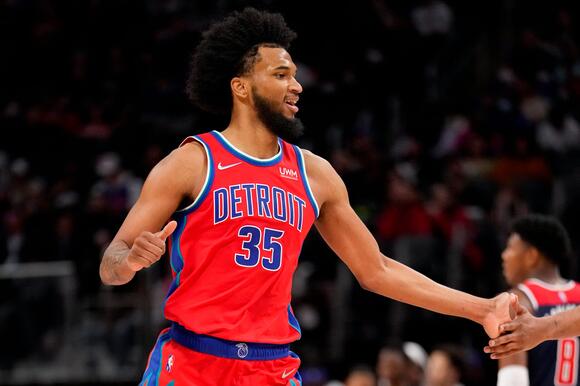 "When I got here, the spirits were high in the locker room," he said during his end-of-season news conference in April. "We took every game seriously and we approached every day with a mindset of just getting better. These past few weeks have been exciting for me. Probably the most fun I’ve had playing the game, and that’s how it’s supposed to feel. I’m used to being in an environment and group where playing basketball is fun."

Bagley carved out a role as a high-energy big man who can finish lobs and score from nearly anywhere inside the arc. He filled a need for a Pistons team lacking frontcourt depth and athleticism. Injuries cut his season short, as a strained left hip caused him to miss Detroit's final five games.

INSIDER: Why Larry Brown believes Jalen Duren is in a 'perfect situation' with Pistons

INSIDE THE REBUILD: Troy Weaver building Pistons in image of great teams, knows fans like what they see

Even with Nerlens Noel and Jalen Duren on the roster now, Bagley is expected to be a key rotation piece next season. He can play power forward or center, depending on who his frontcourt mate is, though defense remains a concern and he is a career 29.1% 3-point shooter on 1.9 attempts per game. He thrived as an offensive release valve at the rim and should continue to be used in a similar role.

"That’s how I like to play," Bagley, the No. 2 overall pick out of Duke in the 2018 draft , said. "That’s the type of style I like to be a part of. Getting up and down, being athletic, running, that’s a part of my game. Being in a situation where I’m able to show that off definitely brings that excitement back. It’s supposed to feel like that, and that’s the feeling that I’ve had ever since I started playing basketball. To feel that again, I’m excited."

Yahoo Sports' Chris Haynes was first to report the deal.

It's Year 3 of general manager Troy Weaver's "restoring," and the Detroit Pistons are finally ready to compete. That was the main message during media day last week. The Pistons have one of the NBA's best young cores — including two 2022 lottery picks in Jaden Ivey and Jalen Duren — and several high-level veterans who will raise the team's floor. They should avoid the depth issues that hurt them during the previous two seasons. The organization isn't measuring success by a playoff berth yet, but the expectation is the team is good enough to compete every night.
DETROIT, MI・1 DAY AGO
San Diego Union-Tribune

Tua Tagovailoa brain injury shocks through Detroit Lions: 'I was shook up'

Detroit Tigers Newsletter: How the Tigers are about to become MLB's longest sufferers

There is a strong chance that by the end of Monday’s action, as we enter an abbreviated final week of the 2022 MLB season, the Detroit Tigers will have the majors’ longest active postseason drought. “But wait,” you’re saying, “they just made the playoffs in … hmmm …...
DETROIT, MI・3 HOURS AGO

Free Press sports writer Dave Birkett breaks down the Detroit Lions' 48-45 loss to the Seattle Seahawks, and looks at players and coaches who helped and hurt their stock Sunday at Ford Field. Three up. TE T.J. Hockenson: The forgotten man in the Lions’ offense the first three games, Hockenson...
DETROIT, MI・5 HOURS AGO
The Detroit Free Press

NHL exhibition: Detroit Red Wings (2-2-0) at Pittsburgh Penguins (1-3-0) Where: Little Caesars Arena. TV: Bally Sports Detroit Extra. Radio: None (radio affiliates). Game notes: The Wings have three more preseason matchups before their regular season begins Oct. 14 vs. the Montreal Canadiens. They beat the Chicago Blackhawks, 3-0, on Saturday. Pittsburg last to Buffalo, 3-0, on Saturday and have one more preseason game before hosting the Arizona Coyotes on Thursday for their season opener.
DETROIT, MI・7 HOURS AGO
The Detroit Free Press

There were times when the Detroit Lions' game against the Seahawks on Sunday looked like a trip back to 2021. Due to injuries, Detroit's wide receivers included Quintez Cephus, Kalif Raymond and Tom Kennedy — all of whom were primary options for Jared Goff at various points last season.
DETROIT, MI・15 HOURS AGO

Detroit Lions' T.J. Hockenson, a Pro Bowl TE, anxious to make an impact, any way he can

T.J. Hockenson stood in front of his locker, the mixed emotion of the situation written across his face. The Detroit Lions offense has been fantastic to start this season, scoring the second most points in the NFL through three weeks. But Hockenson hasn't factored much into it statistically. The fourth-year...
DETROIT, MI・2 DAYS AGO
The Detroit Free Press