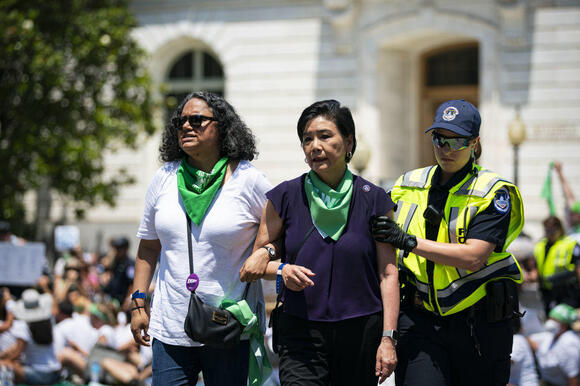 Southern California lawmaker Judy Chu was among several dozen people arrested Thursday in Washington D.C. during a protest in support of abortion rights.

The congresswoman was arrested by Capitol Police at about 1 p.m. Washington time while sitting with other demonstrators in an intersection between the Russell Senate Office Building and the Supreme Court building, according to her spokeswoman Lacy Nelson. Chu was issued a citation and released about two hours later.

Chu, D-Pasadena, is the principal sponsor of the Women's Health Protection Act, which would establish a federal right to abortion care.

"When I first heard Roe was overturned, I immediately thought of who would be most harmed by this decision: a young girl who is a survivor of rape, a woman who cannot afford to travel to another state to access critical care, an expecting mother with an ectopic pregnancy whose life is in danger because she cannot have an abortion," Chu said in a statement. "So, when I think of all these women – and more – the decision to join a peaceful demonstration to make clear we will not allow the clock to be rolled back on abortion rights was easy."

According to Nelson, with Congress in recess, Chu flew back to Washington specifically to participate in the rally, and was the only member of Congress to attend.

Before she was arrested, she was among hundreds of women wearing green, leading a march through the capitol.

The Department of Justice says Nevada violates the Americans with Disabilities Act after conducting an investigation.
NEVADA STATE・17 MINUTES AGO
CBS LA

Former President Donald Trump is suing CNN for defamation and asking for compensatory damages in excess of $75,000 and punitive damages of $475 million, according to a lawsuit filed Monday. He is claiming that the cable news giant has harmed his reputation with "false, defamatory, and inflammatory mischaracterizations of him"...
POTUS・21 HOURS AGO
CBS LA