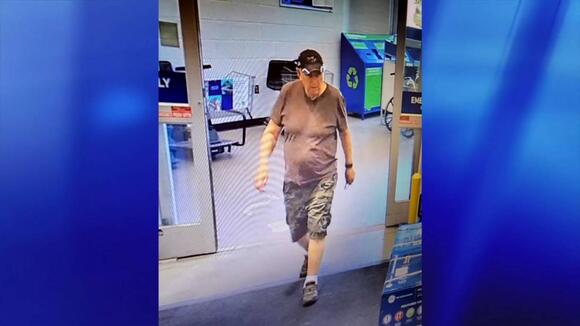 UNITY TOWNSHIP, Pa. — State police arrested a man accused of hitting a woman on the crosswalk of the Walmart in Unity Township Wednesday morning, then taking off.

“There was a customer that was leaving Walmart and pushing a shopping cart and while she’s pushing the cart, a pickup truck backed into her,” Trooper Steve Limani said.

Luckily, that woman did not have serious injuries, but police said the driver of this pickup truck — described as a Chevy Colorado Redline Edition — stopped, then kept driving.

Police said they do not think it was intentional, but after hitting her, he went shopping at Lowe’s, where he is seen on surveillance.

“We have reason to believe that he hit this person just by watching the video surveillance footage at the Walmart parking area,” Limani said.

Investigators said he had an obligation to stop and help and provide information, but because he did not, he is now looking at the potential for criminal charges.

“It’s the actual fleeing after striking something that’s causing the problem in this particular case,” Limani explained.

Kitten rescued from Walmart vending machine in Tennessee Fire crews joked she should name it Pepsi, since it was found in the Pepsi vending machine. (NCD)

WINCHESTER, Mass. — Authorities in Massachusetts arrested five suspects after several people were hurt in an altercation at Mystic Lakes State Park in Winchester, WFXT-TV is reporting. Massachusetts State Police said the incident occurred shortly after 8 p.m. Sunday at Shannon Beach, according to WFXT. Detectives have not confirmed...
WINCHESTER, MA・5 HOURS AGO
WPXI Pittsburgh

School bus crashes into a house in Ohio; no students injured, driver taken to the hospital

COLLEGE CORNER — A school bus driver has been taken to the hospital after a school bus crashed into a house on Monday morning. According to WHIO, emergency crews were called out to a crash near the Ohio-Indiana border just before 8 a.m. The call came in and reported that a school bus transporting 32 students crashed into a building with the possibility that some were trapped, West College Corner Fire Chief Don Jackson told WHIO.
WEST COLLEGE CORNER, IN・3 HOURS AGO
WPXI Pittsburgh

Kangaroo on the loose in northeastern Ohio, police say

BREWSTER, Ohio — A kangaroo is on the loose in northeastern Ohio, perplexing police as they attempt to corral a marsupial that has been hopping away from authorities since Thursday. According to the Brewster Police Department, a resident reported they had spotted a baby kangaroo at about 9:30 a.m....
1 DAY AGO
WPXI Pittsburgh

ALBANY, N.Y. — (AP) — As part of an effort to keep illegal drugs and other contraband out of state prisons, New York is taking away one of the few pleasures of life behind bars: It will no longer let people send inmates care packages from home. Under...
POLITICS・1 DAY AGO

SALEM, Ore. — Despite some hungry and curious pups destroying a winning lottery ticket, officials at the Oregon Lottery still paid out the win. The Oregon Lottery said in a news release that it received a letter with a torn-up ticket and photo of two dogs saying that the dogs had eaten the winning ticket. The letter, sent by Nathan and Rachael Lamet, included a photo of the two Alaskan Klee Kais, named Apple and Jack.
OREGON STATE・2 DAYS AGO
WPXI Pittsburgh

ATLANTA — (AP) — A federal judge on Monday said U.S. Sen. Lindsey Graham must testify before a special grand jury in Atlanta that is investigating whether then-President Donald Trump and his allies broke any laws while trying to overturn his narrow 2020 general election loss in the state.
GEORGIA STATE・4 HOURS AGO
WPXI Pittsburgh

Top lawyers hired by those linked to Georgia election probe

ATLANTA — (AP) — In the state investigation spurred by then-President Donald Trump's call to Georgia's top election official, people who have been called to testify — or who might be — about potential interference in the 2020 presidential contest are turning to high-profile lawyers. Trump...
ATLANTA, GA・1 DAY AGO
WPXI Pittsburgh

Deadline looms for drought-stricken states to cut water use

SALT LAKE CITY — (AP) — Banks along parts of the Colorado River where water once streamed are now just caked mud and rock as climate change makes the Western U.S. hotter and drier. More than two decades of drought have done little to deter the region from...
CALIFORNIA STATE・13 HOURS AGO

What to watch: Cheney in trouble while Palin eyes comeback

WASHINGTON — (AP) — Elections in Wyoming and Alaska on Tuesday could relaunch the political career of a former Republican star and effectively end the career of another — at least for now. Wyoming Rep. Liz Cheney is the vice chair of a U.S. House committee seeking...
WYOMING STATE・14 HOURS AGO
WPXI Pittsburgh

JUNEAU, Alaska — (AP) — They hail from their states' most prominent Republican families. They have been among the GOP's sharpest critics of former President Donald Trump. And after the Jan. 6 insurrection, they supported his impeachment. But for all their similarities, the political fortunes of U.S. Sen....
ALASKA STATE・14 HOURS AGO
WPXI Pittsburgh

GILLETTE, Wyo. — (AP) — The rolling prairie lands of northeastern Wyoming have been a paradise of lush, knee-deep grass for sheep, cattle and pronghorn antelope this summer. But it’s a different green — greener energy — that geologist Fred McLaughlin seeks as he drills nearly two miles...
GILLETTE, WY・7 HOURS AGO