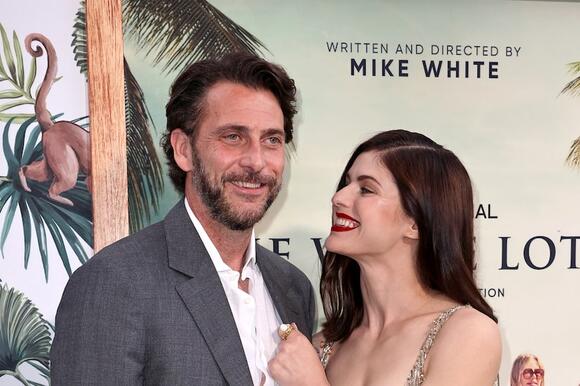 Over the weekend, the pair tied the knot at the Preservation Hall in New Orleans in an intimate ceremony with their close friends and family.

She told Vogue, "We loved the look of Preservation Hall — it was so old, so historic, it lets its age and ‘flaws’ show. That’s what makes it so beautiful. We wanted it to be about music, drinking, and authentic New Orleans.”

Daddario was “nervous” on their wedding day, so much so that she didn’t even notice the flowers until she saw photos.

For the big day, Alexandra wore a silk gown by Danielle Frankel and a long veil, while Andrew sported a pinstriped suit from Brunello Cucinelli.

They opted for a short ceremony. She explained, "We wanted to keep the ceremony itself short so people could have a dose of love and then get back to the music and catching up."

The reception was held at Bar Marilou in the French Quarter.

While news broke on their engagement in December, they were actually engaged for a little longer than that!

Alexandra revealed that Andrew popped the question in August. Of the engagement, she told Vogue, “I was visiting Andrew while he was working on ‘Jack Ryan,’ and they were shooting in Athens. He took me to the Four Seasons there so we could be by the beach. He went outside, and I followed him, and he turned around and proposed, and then we walked and had a pina colada.”

The pair met during the pandemic in New York City. She explained, “I was waiting for my co-op to approve me so I was sleeping on an acquaintance’s couch and would take frequent walks. He was also on a walk, and we passed each other downtown. He turned back and said ‘hi’ just as I was turning around to glance back at him. I laughed and said ‘hi,’ and then we both laughed about how we were the only two people on what is normally an incredibly busy street, and he asked if he could take me to dinner.”

Weeks later, they had their first date in his hotel room at the Greenwich Hotel. She noted, “It was peak COVID and because he was a guest — one of three in the whole hotel — we had our first date by the fire in their downstairs living room. I brought my dog, and she wandered into the kitchen at one point, and we didn’t notice. Someone came out holding her, and said, ‘Is this your dog?’”

The pair made it Instagram official in May 2021 with a kissing photo.

She captioned the photo, "I love you...'and even that is an understatement.'"

Form was previously married to Jordana Brewster, but they split in 2020 after 13 years of marriage.

Billy Ray Cyrus and Firerose might be headed to the altar. The couple has fans speculating they are engaged after she posted a photo on Instagram of herself wearing a ring on that finger earlier this month. She may have been dropping a major hint in the caption, too, writing,...
CELEBRITIES・5 DAYS AGO
extratv

Bachelor Peter Weber & Kelley Flanagan Are Reportedly Back Together!

Bachelor couple Peter Weber, 31, and Kelley Flanagan, 30, are giving their relationship another go, Us Weekly reports. A source says the exes are “full-on back together” after their split in December 2020. The insider reveals the pilot and attorney “rekindled their romance this summer,and have been spending...
CELEBRITIES・7 DAYS AGO
extratv

Meghan King’s ex-husband Jim Edmonds is married again!. Over the weekend, Edmonds tied the knot with Kortnie O’Connor in Lake Como, Italy. The pair exchanged their vows in an intimate ceremony with 32 guests at the Giardino del Mosaico. Kortnie told People magazine, “This was truly a dream...
CELEBRITIES・7 DAYS AGO
extratv

Over a month ago, “Love Is Blind” stars Jarrette Jones and Iyanna McNeely announced their separation. Iyanna has now filed for divorce in Chicago. According to court documents obtained by TMZ, McNeely cited “irreconcilable differences” as the reason for the split. Based on the papers, Jarrette...
TROUBLED RELATIONSHIP・20 HOURS AGO

Zoe Saldana and Sam Worthington are celebrating the re-release of “Avatar” in a new interview with “Extra’s” Katie Krause. The pair dished on the success of the massive box office hit and revealed when they learned there would be more movies to come. The duo...
MOVIES・11 DAYS AGO
extratv

“Sister, Sister” star Tia Mowry, 44, is pulling the plug on her 14-year marriage to Cory Hardrict, 42. On Tuesday, Mowry filed for divorce in Los Angeles, citing irreconcilable differences, TMZ reports. While a separation date was not listed, Mowry is requesting joint physical and legal custody of their...
LOS ANGELES, CA・17 HOURS AGO
extratv

Louise Fletcher, an Oscar winner for her iconic portrayal of heartless Nurse Ratched in the 1975 hit "One Flew Over the Cuckoo's Nest," died Friday of natural causes. Her son, Andrew Bick, confirmed to THR that Fletcher had died at her Montdurausse, France, home. Born July 22, 1934, in Birmingham,...
CELEBRITIES・11 DAYS AGO
extratv

“Bachelor in Paradise” alum Sarah Herron, 35, has a bun in the oven!. Sarah and fiancé Dylan Brown are expecting their first child, a baby boy who is due in May 2023. While she’s only seven weeks pregnant, Herron is sharing the news early. She told Us Weekly, “I know many families prefer to keep pregnancy private until after the first trimester, but I have shared entire fertility journey since day one. One of the blessings of IVF is the support I have gained by being transparent about this process.”
CELEBRITIES・6 DAYS AGO

Jessica Simpson is a $200-million force thanks, in part, to her fashion empire. “Extra’s” Terri Seymour spoke with the star about taking control of the Jessica Simpson Collection, her marriage to Eric Johnson, the public’s constant focus on her weight and appearance, and a new project. After...
WEIGHT LOSS・6 DAYS AGO
extratv

Ryan Bingham is asking to legally change his name amid his divorce from wife Anna Axster. It turns out that when they got married, he changed his name from George Ryan Bingham to Ryan Axster Bingham. Now, The Blast reports he wants to drop his wife’s maiden name and return to his birth name.
TROUBLED RELATIONSHIP・11 DAYS AGO
extratv

Selma Blair rocked the “Dancing with the Stars” stage once again, and she had her BFF Sarah Michelle Gellar in the audience to cheer her on!. “Extra’s” Jenn Lahmers was with Selma, her son Arthur, and her pro partner Sasha Farber after dancing to “Jail House Rock” for “Elvis Night.”
CELEBRITIES・7 DAYS AGO
extratv

Shania Twain is the queen of country music and country fashion!. “Extra’s” Tommy DiDario sat down with Shania to talk about her new music, teaming up with Harry Styles, and more. Tommy asked about her new single “Waking Up Dreaming,” and she described it as “very, very ‘up’...
BEAUTY & FASHION・11 DAYS AGO

Olivia Wilde celebrated the opening day of “Don’t Worry Darling” with a sweet throwback Instagram photo with boyfriend Harry Styles. The photo appears to have been taken during filming. Olivia, who directed the new movie, is all smiles as she sits across from Harry at a folding...
CELEBRITIES・11 DAYS AGO
extratv

Sylvester Stallone and Jennifer Flavin are back together, Page Six reports. Flavin filed for divorce last month after 25 years of marriage. Now, Sly’s rep tells Page Six they have reconciled. “They decided to meet back up at home, where they talked and were able to work out their differences,” the spokesperson said, adding, “They are both extremely happy.”
CELEBRITIES・11 DAYS AGO
extratv

George Clooney and his wife Amal sat down for a rare interview on their eighth wedding anniversary. The couple opened up to “CBS Mornings” host Gayle King about their marriage, twins, and more. George recalled, “It was the minute she walked through the door, I was taken by...
RELATIONSHIPS・6 DAYS AGO
extratv

Over the weekend, “Real Housewives of Orange County” alum Meghan King and Bachelor Nation’s Mike Johnson had everyone talking with their cozy red-carpet appearance at the 2022 iHeartRadio Music Festival in Las Vegas!. “Extra” spoke with Meghan and Mike about spending time together in Vegas. While...
LAS VEGAS, NV・8 DAYS AGO

“Extra’s” Melvin Robert spoke with “The Bachelorette” alum Gabby Windey and her pro partner Val Chmerkovskiy after Bond Night in the “Dancing with the Stars” ballroom. Gabby got candid about feeling like she wants to quit “every day” and how her fiancé Erich Schwer...
CELEBRITIES・14 HOURS AGO
extratv

It’s over between Clayton Echard and Susie Evans, who met on Season 26 of “The Bachelor.”. They shared the news on Instagram, writing, “With incredibly heavy hearts, we wanted to share that we have decided to go our separate ways. For anyone who has ever loved, knows this was a painful decision to make and not one taken lightly.”
CELEBRITIES・11 DAYS AGO
extratv

Zach Shallcross got his heart broken by Rachel Rechhia on “The Bachelorette,” but now he will be the one handing out roses — and maybe a diamond ring — as the Bachelor!. Only “Extra’s” Jenn Lahmers was with him after his first-ever talk show interview, on...
CELEBRITIES・11 DAYS AGO
extratv

Gisele Bündchen and Tom Brady are reportedly having marital problems, and it doesn’t look like it’s getting any better. People magazine reports Gisele has hired a divorce lawyer after months of “tension.”. An insider told the outlet that Tom is “trying to figure out what to...
TROUBLED RELATIONSHIP・15 HOURS AGO