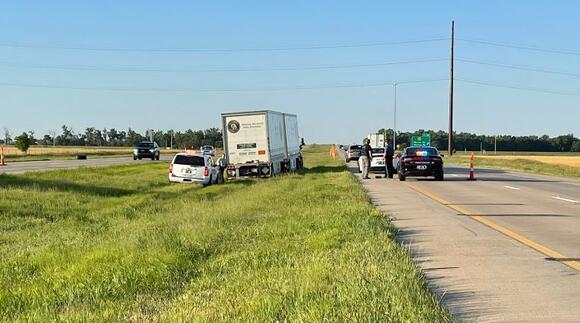 SALINA (KSNT) – A bizarre set of circumstances led to the death of a St. Louis man on I-135 south of Salina at 6:30 a.m. Thursday morning.

According to the Kansas Highway Patrol , a non-injury crash between two vehicles, a car, and a semi-tractor-trailer was reported Thursday morning near milepost 86 on I-135.

Shortly after the call, the KHP started receiving reports of a person walking naked on the highway. A Kansas Highway Patrol trooper confirmed that the individual was the driver of the car involved in the initial crash call.

According to the Kansas Highway Patrol, David Pierre Jackson left the scene of the crash and was traveling southbound on I-135 when Jackson ran out into the interstate and was hit by a 21-year-old Nebraska driver in a Chevrolet Equinox.

📲 Download the KSNT 27 News to stay updated on the go.

📧 Sign up for KSNT 27 News email alerts to have breaking news sent to your inbox.

Neither the driver of the Equinox nor his passenger, a 52-year-old Salina man were injured.

So sorry for the young person who hit this man. What a tragedy.

RILEY COUNTY (KSNT) – Riley County Fire District #1, stations 106 and 109 were called to the 8600 block of Green Randolph Road for an early Friday morning crash, The crash happened near 4:15 a.m. Crews used the Jaws of Life to access an individual in the vehicle.
RILEY COUNTY, KS・2 DAYS AGO
KSNT News

MANHATTAN (KSNT) – A car crash has been reported by the Riley County Police Department to have temporarily shut down an intersection in Manhattan. According to the RCPD, a car crash involving three vehicles was reported at 1:58 p.m. on Aug. 10 at the intersection of South Seth Child Road and Southwind Road in Manhattan. […]
MANHATTAN, KS・3 DAYS AGO
KSNT News