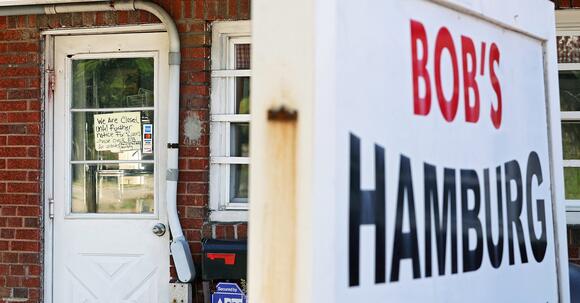 The iconic burger joint, which did not sustain interior damage, should be able to reopen in the near future, owner Charly Murphy said Thursday, adding he does not know exactly when. It is Akron's oldest continuously operated restaurant.

As an interim measure, Murphy said he hopes to soon buy and place a food truck in the parking lot at 1351 East Ave. to serve classic Bob's Hamburg menu items.

Firefighters were called to the restaurant at 10:05 p.m. and were on scene for an hour and 14 minutes. No injuries were reported.

Firefighters also responded to a house fire at 11:01 p.m., just a short drive away from Bob's Hamburg, at 1106 Vernon Odom Blvd. It was unclear as of Thursday afternoon whether the fires were related.

"I do not know what caused the fire," Murphy said. The fire apparently started on the exterior of the door that leads to the kitchen, he said.

"Nothing in the kitchen caused it," he said. "Bob's original grill is still there. The structure overall is fine."

Part of the underside of Bob's, which was built around a streetcar, appeared to have been damaged, Murphy said.

Murphy and partner Alicia Kennedy announced they were buying Bob's Hamburg in August 2021 after the previous co-owner of Bob's, Josh Sines, died unexpectedly earlier in the year. Sines' business partner Jeremy Caudill sold the restaurant to the couple. Murphy said buying Bob's was saving part of Akron's history; a documentary is being made about the place.

Murphy said he was in negotiations to buy the Bob's Hamburg food truck from Caudill when the fire happened. He said he hopes to conclude the negotiations soon and temporarily have the truck operating out of the East Avenue parking lot.

Murphy said was alerted about the Bob's Hamburg fire Wednesday night while he was in Youngstown, where one of his other food trucks was being repaired.

The Bob's Hamburg Facebook page noted the fire. The post in part said, "While the physical structure of [Bob's] Hamburg is not fireproof; the legacy, love, and lore are indestructible. We will be open ASAP and are already on working on plans to serve our community in the interim."

And for people who need a Bob's fix right away, the new Highland Square location of Bob's, inside Ray's Pub on West Market Street, remains open.

Beacon Journal reporter Jim Mackinnon can be reached at 330-996-3544 or jmackinnon@thebeaconjournal.com. Follow him @JimMackinnonABJ on Twitter or www.facebook.com/JimMackinnonABJ.