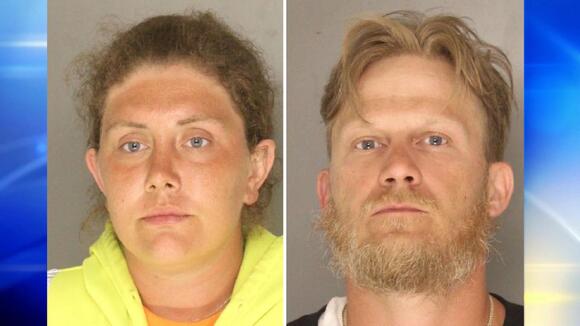 MUNHALL, Pa. — A toddler who was found unresponsive inside a home in Munhall in May died of a fentanyl overdose, which was ruled a homicide. Now, his parents are facing charges, according to police documents.

James Kraft and Paige Hufnagel are facing several charges, including criminal homicide, endangering the welfare of children and recklessly endangering another person.

Robert Kraft, 2, was found unresponsive inside the home on May 12. He died just hours later at UPMC Children’s Hospital.

Police said the home was in deplorable conditions and there were thousands of heroin baggies inside.

Police paperwork says that there were also two other children inside the home at the time, a 4-year-old and a 7-year-old.

The next day, the Allegheny County Medical Examiner’s Office ruled Kraft’s death a homicide caused by fentanyl toxicity, according to the police report.

According to the criminal complaint, police say there were too many bags of heroin in the home to count. Investigators say Robbie got ahold of some and died.

Detectives say they saw stamp bags of heroin and pills throughout a bedroom, plus needles and other paraphernalia that are commonly used to ingest heroin.

Some of the heroin bags were also near Lego toys and a child’s toothbrush.

When detectives spoke to that child, they reported him saying, “Robbie is dead. He ate something. He’s dead.”

The couple’s other two children were taken into protective custody.

James Kraft and Hufnagel were arrested Thursday morning. They are at the Allegheny County Jail awaiting arraignment.

Enough of this. I know these parents didn’t want their child to die. But the only thing important to them is their drugs. Put them in jail.

Police search for mother, father after baby dies under ‘suspicious circumstances’ in Canonsburg

CANONSBURG, Pa. — Two people are facing charges after a 3-month-old girl died under suspicious circumstances and her older brother was found with fentanyl and cocaine in his system. Canonsburg police were called to a First Street home early Thursday morning for an unresponsive child. When they arrived, they...
CANONSBURG, PA・12 HOURS AGO
WPXI Pittsburgh

ALLEGHENY COUNTY, Pa. — A father who is charged in his baby’s death was granted non-monetary bail on Friday afternoon. His 3-month-old baby died after being left in a hot car in Upper St. Clair earlier this summer. Khang Nguyen turned himself in Thursday and was denied bond.
UPPER SAINT CLAIR, PA・18 HOURS AGO
WPXI Pittsburgh

One man taken to a hospital, another shot in hand after overnight shooting in Duquesne

DUQUESNE, Pa. — Two men were shot after an overnight incident in Duquesne, police say. Officers were called to the 100 block of South 5th Avenue at around 1:59 a.m. after reports of a shooting. When police arrived on the scene, they found two men suffering from gunshot wounds....
DUQUESNE, PA・4 HOURS AGO
WPXI Pittsburgh

PITTSBURGH, Pa. — The father of a 3-month-old baby who died after being left inside a hot car earlier this summer is now facing charges. Led by an Allegheny County detective and followed by his lawyer, Khang Nguyen, 33, turned himself in to authorities to be arraigned Thursday morning. It’s the beginning the legal process for Nguyen nearly two months after the death of his three-month-old son, Kayden.
PITTSBURGH, PA・2 DAYS AGO

McKEES ROCKS, Pa. — Police are investigating a disturbing case of animal cruelty out of Allegheny County. They are asking the public for help finding the person involved. A 911 call informed officers of reports of a pit bull running loose with a puncture wound to its abdomen. Officers...
ALLEGHENY COUNTY, PA・1 DAY AGO
WPXI Pittsburgh

NORTH HUNTINGDON TOWNSHIP, Pa. — North Huntingdon Township Police need your help trying to track down a bank robbery suspect who tried to rob the PNC Bank on Norwin Avenue 45 minutes before it closed for the day Wednesday. He told the teller he was armed and demanded money,...
WESTMORELAND COUNTY, PA・1 DAY AGO
WPXI Pittsburgh

PITTSBURGH — Pittsburgh police have made an arrest following a fatal shooting in the Hill District in March. According to a release from police, 32-year-old Robert Freeman has been arrested for the March 22, 2022 homicide of Tiwand Hill. PREVIOUS COVERAGE: Police looking for suspect after man shot, killed...
PITTSBURGH, PA・19 HOURS AGO

1-year-old child dead after being hit by vehicle in Fayette County; 1 man in custody

BROWNSVILLE, Pa. — A one-year-old girl is dead after she was hit by a vehicle in Fayette County. A 58-year-old man was taken into custody on the scene. Pennsylvania State Police were called to Green Street in Brownsville for reports of the accident at around 5:14 p.m. Police are...
FAYETTE COUNTY, PA・1 DAY AGO
WPXI Pittsburgh

Neighbor rushes to get dogs out of burning home after explosion in Jeannette, no injuries reported

JEANNETTE, Pa. — “I saw the fire pretty much breaking though the windows, you can hear the glass breaking.”. Robert Williams was standing in his bathroom window when he saw flames and smoke coming out of his neighbor’s house on South 14th Street. He called 911 and...
JEANNETTE, PA・22 HOURS AGO
WPXI Pittsburgh

MONROEVILLE, Pa. — Two mechanics from a well-known dealership are facing charges tonight, accused of intentionally damaging at least one customer’s car. Jacob Ciarkowski and Aaron Eager are facing summary charges for criminal mischief and unlawful activities. State police are investigating and are worried there could be more...
MONROEVILLE, PA・2 DAYS AGO
WPXI Pittsburgh

WILKINS TOWNSHIP, Pa. — A man is dead after he was shot and killed by his Lyft driver in a local Sheetz parking lot. Allegheny County officials say police were called to the Sheetz on William Penn Highway at around 10:46 p.m. Thursday for reports of a shooting. Officers...
ALLEGHENY COUNTY, PA・1 DAY AGO

PITTSBURGH — One day after Target 11 broke the story that nearly a dozen police officers had been pulled off the streets after failing firearms recertification, the Police Department is taking action. Target 11 investigator Rick Earle has confirmed that the department will now be offering voluntary firearms training...
PITTSBURGH, PA・17 HOURS AGO
WPXI Pittsburgh

CARNEGIE, Pa. — Carnegie police are warning people about a fake post online about a serial killer preying on women in the area. The post has been circulating on social media and Carnegie Police say its false. The post was found on multiple Facebook pages. It shows a photo...
CARNEGIE, PA・23 HOURS AGO
WPXI Pittsburgh

PITTSBURGH — Police have arrested a man after a SWAT situation in Pittsburgh’s Hill District. Authorities were called to Chauncey Drive and Bedford Avenue at around 3:05 p.m. Pittsburgh Police said a man barricaded himself inside a home as they were serving a warrant. Officers took the man...
PITTSBURGH, PA・2 DAYS AGO
WPXI Pittsburgh

PITTSBURGH, Pa. — Target 11 has learned that 11 Pittsburgh police officers have been banned from field duty for failing to pass firearms recertification. According to an internal police department memo obtained by Target 11, the department began the recertification process on August 1. It’s scheduled to run through...
PITTSBURGH, PA・1 DAY AGO

WASHINGTON COUNTY, Pa. — A Washington County deputy sheriff has died after experiencing what the Washington County Coroner’s office called a “sudden cardiac event” while on duty Wednesday. The deputy has been identified as Chad Beattie, 45, of Claysville. Beattie experienced the cardiac event on Wednesday...
WASHINGTON COUNTY, PA・2 DAYS AGO
WPXI Pittsburgh

CAMBRIA COUNTY, Pa. — A Pennsylvania woman who allegedly practices witchcraft used a book of spells to set a vehicle on fire, authorities said. According to police, Kristy Lynn Malzi, 47, of Hollsopple, used pages from the “Wicca Book of Spells” to set the car on fire, WJAC-TV reported.
HOLLSOPPLE, PA・2 DAYS AGO
WPXI Pittsburgh

HAMPTON TOWNSHIP, Pa. — A car crashed into the side of a bank in Hampton Township Thursday afternoon. Crews were called to the Citizens Bank in the 4700 block of Route 8 around noon. Chopper 11 flew over the scene and could see one car that went over a...
HAMPTON TOWNSHIP, PA・1 DAY AGO
WPXI Pittsburgh

ALLEGHENY COUNTY, Pa. — The FBI is now investigating after burglaries at three federal credit unions in Allegheny and Beaver Counties on the same night. Our sources tell Channel 11, around 12:01 a.m. Saturday, a suspect or multiple suspects cut the power at the outside meter of the Tri Valley Federal Credit Union in Scott Township. The suspects then removed the meter from the outside panel and two of the four contact points were cut, cutting power to the building.
BEAVER COUNTY, PA・2 DAYS AGO