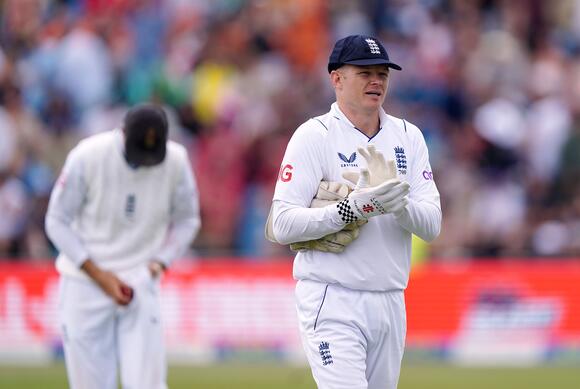 England have made two changes for their rescheduled Test match against India, with Sam Billings taking over from the unwell Ben Foakes and James Anderson back to lead the bowling attack.

Foakes missed the last couple of days of the victory over New Zealand at Headingley after testing positive for Covid, with Billings stepping in as an emergency replacement, and struggled through a light training session at Edgbaston on Thursday.

With 39-year-old Anderson fit again after a niggling ankle injury, England made the difficult decision to drop Jamie Overton . The Surrey seamer, who made 97 on debut and took two wickets, has been unable to edge ahead of a first-choice trio comprising Anderson, Stuart Broad and Matthew Potts.

The game will settle a five-match series that began last summer but ended without a conclusion after India’s concerns over a Covid outbreak saw them withdraw a matter of hours before play was due to begin at Old Trafford.

Captain Ben Stokes explained: “Unfortunately Foakesy hasn’t recovered as well as we’d have liked him to, so Sam is going to stay in the team and keep.

“He doesn’t feel like he could give the best account of himself this week. We took the decision out of his hands and said ‘get yourself better’.”

England had the option to hand the gloves to the in-form Jonny Bairstow and give Yorkshire’s Harry Brook a first cap in the middle order, but Stokes was unwilling to compromise a player who produced a career-best series against New Zealand.

“We just want Jonny to concentrate on batting because however he’s thinking is working.”

Stokes also offered some solace to Overton, whose partnership with Bairstow rescued England from complete collapse in his maiden Test innings.

The 28-year-old’s unexpected batting efforts were not enough to win him another chance this week, but he has done his prospects of further opportunities no harm at all.

“Jamie got his opportunity to show what you can do in a cricket field and he gave the best account possible of himself,” admitted Stokes.

“He’s obviously someone that we see has a bright and long future for him going forward.

“It obviously must be very disappointing for him, but he can walk away knowing that he’s done everything that he possibly could have done last week to really put his name forward to have a look a good career for England. That’s how sport at the top level can work sometimes.”

Ben Youngs faces an uncertain Test future after he was dropped for England’s Guinness Six Nations clash with Italy on Sunday.England’s most capped men’s player made a disappointing contribution off the bench in the 29-23 defeat by Scotland that launched Steve Borthwick’s reign and will play no part against the Azzurri.It is the first time the 33-year-old has been axed for a Six Nations match since 2014 and it places a question mark over his involvement in the World Cup later this year.Steve Borthwick has retained a 29-player squad ahead of our @SixNationsRugby match against Italy 🌹@o2 | #WearTheRose pic.twitter.com/Xoqf3aEoLs—...
1 HOUR AGO
The Independent

Ireland centre Stuart McCloskey admits he does not fully understand why he was regularly overlooked by former head coach Joe Schmidt ahead of potentially making a fifth successive Test start under Andy Farrell.The Ulster man was handed his international debut by Schmidt against England in the 2016 Six Nations but won just two further caps up to and including the 2019 World Cup.McCloskey has been in contention for selection far more frequently during the Farrell era and is expected to retain his role at inside centre for Saturday’s blockbuster clash with reigning Grand Slam champions France in Dublin following...
5 HOURS AGO
The Independent

Ben Youngs faces an uncertain Test future after he was dropped for England’s Guinness Six Nations clash with Italy on Sunday.England’s most-capped men’s player made a disappointing contribution off the bench in the 29-23 defeat by Scotland that launched Steve Borthwick’s reign and will play no part against the Azzurri.It is the first time that he has been dropped for a Six Nations match since 2014 and it places a question mark over the 33-year-old involvement’s in the World Cup later this year.Steve Borthwick has retained a 29-player squad ahead of our @SixNationsRugby match against Italy 🌹@o2 | #WearTheRose pic.twitter.com/Xoqf3aEoLs—...
4 HOURS AGO
The Independent

Sports stars and clubs across the world continue to provide an insight into their lives on social media.Here, the PA news agency looks at some of the best examples from February 8.FootballMesut Ozil did his bit to help in aftermath of Turkey and Syria earthquake.Zor zamanlarda birlikte her şeyi başarabiliriz ❤️🇹🇷🇸🇾 pic.twitter.com/4fJdggTSQb— Mesut Özil (@M10) February 8, 2023Beth Mead was ready to cheer on the Lionesses.Excited to watch the girls in the @arnoldclarkcup this month, I will be there no.1 fan. I’m working hard to hopefully wear that shirt again soon!💪🏼🥰 https://t.co/GNtEMBIzbX— Beth Mead (@bmeado9) February 8, 2023BasketballCongratulated poured in...
4 HOURS AGO
The Independent

Marco Silva watched Fulham secure an FA Cup fifth-round clash with Leeds from the comfort of the stands as Sunderland’s hopes of a 1973 reunion went up in smoke.Harry Wilson’s early strike and second-half goals from substitute Andreas Pereira and Layvin Kurzawa earned the Londoners a 3-2 fourth-round replay victory at the Stadium of Light, when their boss was forced to take a seat among a crowd of 29,651 as he served a touchline ban.Their reward is a home clash with Leeds, who parted company with head coach Jesse Marsch on Monday.For Sky Bet Championship Sunderland, who dragged themselves back...
1 HOUR AGO
The Independent

Manchester City could face a humiliating climb through the English football pyramid if the alleged breaches the Premier League has charged them with are proven and result in expulsion from the top flight.While there has been an expectation that such an extreme outcome would see the Abu Dhabi project go into the Championship, that would only be the case if it a points deduction led to relegation. If the alleged breaches are proven, and the Premier League commission advises the strongest possible punishment of expulsion, the current English Football League rules would not allow for immediate entry into the...
7 HOURS AGO
The Independent

Fulham booked an all-Premier League FA Cup tie with Leeds United after beating second-tier Sunderland 3-2 in their fourth-round replay on Wednesday.After the first encounter finished 1-1, Fulham raced into an early lead through Harry Wilson’s fine finish inside the penalty area.Marco Silva’s team, who have impressed in their first season back in the English top flight this term, looked to be cruising through to the next round after substitute Andreas Pereira added a second just before the hour mark.Jack Clarke got the hosts back into the contest with 13 minutes left, however, to give Sunderland fans hope, before Layvin Kurzawa restored Fulham’s two-goal lead in the 82nd minute.Young substitute Jewison Bennette’s cool finish in stoppage time ensured a nervy finish for Fulham, but they held on to secure their first victory in five matches in all competitions.
2 HOURS AGO
The Independent

Qatar Sports Investments is considering the purchase of a minority stake in Manchester United or another Premier League club, the PA news agency understands.QSI is understood to be working alongside a consortium of international investors looking to buy a significant stake in an English club, with Manchester United one of those under consideration.The organisation is a subsidiary of the Qatar Investment Authority (QIA), the country’s sovereign wealth fund, which has assets worth an estimated 450 billion US dollars (more than £372bn).Sources aware of the discussions say a full takeover of United by anyone connected to Qatar is out of...
4 HOURS AGO