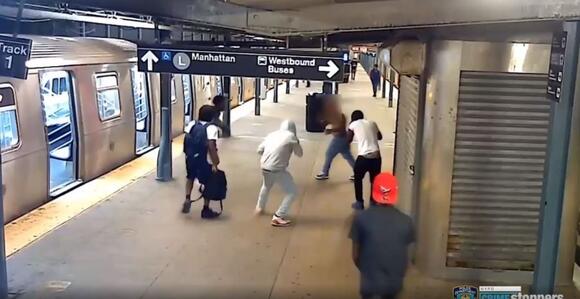 CANARSIE, Brooklyn (PIX11) – A group of five people attacked a man inside a New York City subway station and stole his bag containing more than $7,500 worth of jewelry, NYPD officials said.

The robbery happened inside the Canarsie-Rockaway Parkway station in Brooklyn on May 18 around 3:30 a.m., police said.

The group got into a verbal dispute with a 47-year-old man inside the station. It turned physical and the group punched and kicked the man on his head and body, then stole his bag with $7,550 worth of jewelry inside, according to the NYPD.

The victim was treated at a hospital for minor injuries, police said.

The NYPD is still trying to identify the five suspects who were captured on surveillance video. Police believe they were between the ages of 16 to 20 years old.

okay first off who is riding the subway with that much worth of jewelry in their bag? and just so happened that they picked this one random guy,? no there's something more to that he was targeted they knew he had that in that bag.

The man had 7.5k in the bookbag but wasn't carrying a gun?? Especially at that time at the train station, he was definitely followed because he got setup

Each and every one a shining example for their community. Exactly what we’ve come to expect. Concealed carry coming soon boys….

Cop slashed in the ear trying to help EDP in Brooklyn: NYPD

BROOKLYN (PIX11) — An emotionally disturbed person allegedly slashed a police officer in the ear Sunday in Brooklyn, police said. Authorities responded to the emergency call near 536 Marcy Avenue at 11:15 a.m. Police said the officer followed the man into the G line subway station at Myrtle and Willoughby avenues when he was injured. […]
BROOKLYN, NY・6 HOURS AGO
PIX11

NEW YORK (PIX11) — The heartbroken widow of a cab driver slain in Queens spoke out on Sunday, calling her husband the backbone of the family. Kutin Gyimah, a 52-year-old Bronx resident who was originally from Ghana, was fatally assaulted near Beach 54th Street and Arverne Boulevard in the Edgemere section of Queens 6:30 a.m. […]
QUEENS, NY・2 HOURS AGO
PIX11

EAST WILLIAMSBURG, Brooklyn (PIX11) — A man in Brooklyn had his dog stolen from him when he was unable to give a trio of robbers any money, police said. The dognapping happened in front of 100 White Street in East Williamsburg around 7:15 p.m. on Wednesday, Aug. 10, according to the NYPD. The 29-year-old victim […]
BROOKLYN, NY・1 DAY AGO
PIX11

Man, 19, fatally shot in the leg in Inwood: NYPD

INWOOD, Manhattan (PIX11) — A 19-year-old man was fatally shot in the leg Saturday night in Manhattan, police said. The victim was at a barbecue near 3761 Tenth Avenue in Inwood when shots rang out just before 11 p.m., police said. Cops found the man with a gunshot wound to the leg and he was […]
MANHATTAN, NY・13 HOURS AGO

BEDFORD PARK, the Bronx (PIX11) — A Bronx man fatally shot himself in the head after shooting his wife in the foot in their Bedford Park home early Saturday, police said. Cops were called to the apartment at 2830 Marion Ave. in Bedford Park at around 2:25 a.m. Officers found the 31-year-old woman with a […]
BRONX, NY・12 HOURS AGO
PIX11

EDGEMERE, Queens (PIX11) — A New York City taxi driver was killed in Queens when he confronted passengers who refused to pay for the ride, officials said. Kutin Gyimah, 52, of the Bronx, was fatally assaulted near Beach 54th Street and Arverne Boulevard in the Edgemere section around 6:30 a.m., according to the NYPD. Gyimah […]
QUEENS, NY・1 DAY AGO
PIX11

CROWN HEIGHTS, Brooklyn (PIX11) — A woman attacked a nail salon employee in Brooklyn on Aug. 2 after he stopped her from leaving without paying, police said on Friday. The woman received services in a salon along St. John’s Place near Utica Avenue at around 1 p.m. and refused to pay. When a 59-year-old worker […]
BROOKLYN, NY・1 DAY AGO
PIX11

PELHAM BAY, the Bronx (PIX11) – A subway worker needed surgery after he suffered broken bones in an assault while at work in the Bronx, union officials said. Subway cleaner Anthony Nelson was attacked outside the Pelham Bay Park station Thursday morning, according to Transport Workers Union Local 100. Nelson was working in the station […]
NEW YORK CITY, NY・2 DAYS AGO

Man crushed to death in garbage compactor of Brooklyn building

BEDFORD-STUYVESANT, Brooklyn — A man was crushed to death in the garbage compactor of a Bedford-Stuyvesant apartment building early Friday, according to authorities. The man somehow ended up in the garbage chute of the building on Gates Avenue near Marcus Garvey Boulevard around 4:05 a.m., officials said. He then entered the compactor, where he was […]
BROOKLYN, NY・2 DAYS AGO
PIX11

EAST VILLAGE, Manhattan (PIX11) — A man stabbed another man with an ice pick in Manhattan early Friday morning, police said. The two men got into a dispute along East Sixth Street near Avenue B in the East Village at around 12:30 a.m., authorities said. The suspect, 36, stabbed the victim, 42, in the stomach […]
MANHATTAN, NY・2 DAYS AGO
PIX11

CONCOURSE, the Bronx (PIX11) — A store owner in the Bronx was seriously injured after being attacked by two robbers on July 28, police said Thursday. The 64-year-old victim attempted to stop the suspects after they tried to steal some items from his store along Morris Avenue near East 163rd Street at around 5 p.m., […]
BRONX, NY・2 DAYS AGO
PIX11

CYPRESS HILLS, Brooklyn — Two BP gas stations in Cypress Hills were robbed on consecutive days in what investigators believe are related crimes, officials said Friday. The first incident occurred around 5:15 a.m. Tuesday, when a man went behind the counter of the station on Atlantic Avenue near Hale Avenue, pulled a knife on a […]
BROOKLYN, NY・2 DAYS AGO
PIX11

MANHATTAN, N.Y. (PIX11) – The NYPD is searching for a woman who allegedly pepper-sprayed a bus driver in Manhattan. The incident happened in front of 2967 Eighth Ave. back on July 5, according to the NYPD. The woman came up to the bus driver’s side window and started banging on the glass. She then allegedly […]
MANHATTAN, NY・3 DAYS AGO
PIX11

HARLEM, Manhattan (PIX11) — A man was stabbed during an argument aboard an MTA bus early Thursday in Harlem, police said. The victim, 38, was riding the bus near West 135th Street and Lenox Avenue around 2 a.m. when he became involved in a dispute with another man, according to authorities, who could not immediately […]
3 DAYS AGO
PIX11

CYPRESS HILLS, Brooklyn (PIX11)— A 75-year-old man was found dead in his Brooklyn apartment Wednesday afternoon, police said. The man lived in an apartment above a restaurant. Someone at the restaurant had called 911 because of a smell coming from the apartment. Authorities were conducting a wellness check in the second-floor apartment at 25 101st Ave. […]
BROOKLYN, NY・3 DAYS AGO
PIX11

NEW YORK (PIX11) — The sights, sounds, and flavors of the Dominican will take over Manhattan Sunday. The National Dominican Day Parade is celebrating its 40th anniversary and kicks off at noon near 38th Street and Sixth Avenue. Thousands of people are expected to attend the popular event which will feature dozens of floats, marchers, […]
MANHATTAN, NY・11 HOURS AGO
PIX11

Mom, teen son stab each other during fight inside Brooklyn home: NYPD

CONEY ISLAND, Brooklyn (PIX11) — A mother and son stabbed each other during an argument inside their Brooklyn home Wednesday night, police said. The 44-year-old mom and her 17-year-old son were each slashed multiple times during the altercation in their Coney Island apartment on 29th Street at around 9 p.m., according to an NYPD spokesman. […]
BROOKLYN, NY・3 DAYS AGO
PIX11

THE BRONX (PIX11) — A 38-year-old train operator died on Wednesday after she was found unconscious on subway tracks in the Bronx, officials said. A coworker found Azure Forde, 38, face-up on the tracks at the Mosholu Yard around 8:20 a.m., authorities said. There were no signs of trauma that would indicate she’d been hit […]
BRONX, NY・3 DAYS AGO