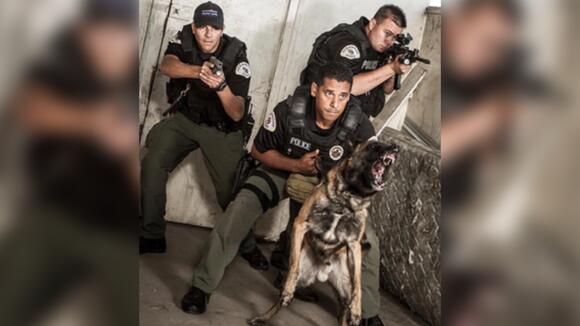 RUSSELL ( KSNT ) – A police dog from California with seven years of experience in law enforcement was laid to rest in Russell, Kansas.

The Russell Police Department and the Russell County Sheriff’s Office had the “distinct honor” of escorting the retired K9 known as Max for his last ride on June 29. With his health failing, the decision was made to have Max euthanized.

Max came to Kansas after previously serving with the Oceanside, California Police Department for seven years. When he entered retirement, he was adopted by Josh and Sydnie Nickerson in Russell.

We have no doubt Max was as good a police K9 as he was a pet to Josh and Sydnie. We extend them our sympathy as losing pets is never easy.

K9 police dogs usually work for ten years before eventually retiring, according to the Kansas City Police Department. Retired K9s usually spend the rest of their lives with the handler they worked with on the force.

Rest in Peace Max!! Thank you for all your years of service, you are one of the Best of the Best!!

WICHITA, Kan. (KSNW) — A homicide victim found 37 years ago in New Mexico has been identified as a missing Wichita teenager. On Tuesday, authorities with the Doña Ana County Sheriff’s Office said the victim is 16-year-old Dorothy Harrison. It took DNA to finally make the connection. Now that they know her name and have […]
WICHITA, KS・3 DAYS AGO
KSNT News

What sunflower fields are open in NE Kansas?

TOPEKA (KSNT) – It’s officially sunflower season in Kansas. With the help of www.travelks.com, we have put together a list of sunflower fields in northeast Kansas that are open to the public. Each has its own growing period for sunflowers this fall which, for some, has already begun. Sunflowers only last around two weeks, so […]
KANSAS STATE・1 DAY AGO
KSNT News

‘You drink, you drive, you lose’ campaign set to start soon in Kansas

HIAWATHA (KSNT) – Law enforcement agencies across Kansas will soon crack down on removing impaired drivers from the road with the start of their “You drink, you drive, you lose” campaign. From Aug. 20 to Sept. 7, officers will work to enhance road safety by “vigorously enforcing” traffic laws and impaired driving, according to the […]
HIAWATHA, KS・2 DAYS AGO
KSNT News

Does Kansas have the best-looking highway patrol cruisers? You can vote

KANSAS (KSNT) – The 9th Annual “America’s Best Looking Cruiser” Calendar Contest is happening and the Kansas Highway Patrol is stepping up its game this year. The Kansas Highway Patrol has entered a photo of the new cruiser backdropped by the gently rolling hills of Kansas. The Sunflower State got its first look at one […]
KANSAS STATE・2 DAYS AGO

TOPEKA, Kan. (AP) – An increase in turnout among Democrats and independents and a notable shift in Republican-leaning counties contributed to the overwhelming support of abortion rights last week in traditionally conservative Kansas, according to a detailed Associated Press analysis of the voting results. A proposed state constitutional amendment would have allowed the Republican-controlled Legislature […]
KANSAS STATE・1 DAY AGO
KSNT News

KDOT reminds drivers that stopping for school buses is the law

TOPEKA (KSNT) – With students headed back to school, the Kansas Department of Transportation is enforcing the importance of the Kansas School Bus Stop Arm Law. Within Kansas law KSA 8-1556, all motorists are required to stop when approaching or overtaking a stopped school bus displaying its flashings red lights and stop arm. Motorists are […]
TOPEKA, KS・15 HOURS AGO
KSNT News

Shawn Percells, convicted of performing illegal autopsies in Kansas, is banned from doing similar business in Kansas in the future.
WABAUNSEE COUNTY, KS・3 DAYS AGO

LAWRENCE (KSNT) – Stephen Marlow, the man arrested in Lawrence for the quadruple murder of four people in Ohio, made his first appearance in the Douglas County District Court Wednesday afternoon. Marlow appeared in front of Judge Sally Pokorny to schedule an extradition hearing. That hearing was scheduled for 8:45 a.m. Thursday morning. Marlow has […]
LAWRENCE, KS・3 DAYS AGO
KSNT News

TOPEKA (KSNT) – The latest blue-green algae report from the Kansas Department of Health and Environment shows that six lakes remain health hazards. As of Aug. 11, six lakes continue to hold high levels of blue-green algae or harmful algal blooms (HAB). They have been classified as being at the ‘Warning’ level by the KDHE. […]
KANSAS STATE・2 DAYS AGO
KSNT News

KANSAS (KSNT) – Three Kansas organizations came together to address several safety issues facing students as they return to their classrooms this year. The Kansas Highway Patrol, Kansas State Department of Education and Safe Kids Kansas put out a list of safety tips to help encourage parents to talk to their children about how to […]
KANSAS STATE・3 DAYS AGO
KSNT News

KANSAS (KSNT) – A recount is underway for a constitutional amendment that failed earlier in August. According to Whitney Tempel, director of communications and policy with the Kansas Secretary of State, a private citizen named Melissa “Missy” Leavitt has posted a $220,000 bond for a hand recount of the constitutional amendment on abortion. The deadline […]
KANSAS STATE・1 DAY AGO

TOPEKA (KSNT) – One of the candidates for Kansas State Treasurer is calling for a recount. Senator Caryn Tyson is one of two people running for the position of Kansas State Treasurer. Her opponent, Representative Steven Johnson, is shown to be the favored Republican candidate on Friday as the last of the votes in the […]
KANSAS STATE・1 DAY AGO
KSNT News

TOPEKA, (KSNT)— Two candidates for Kansas Governor are at odds over the status of the state’s economy. Democratic incumbent Laura Kelly has been hitting the campaign trail touting job growth and economic success. However, her Republican opponent Derek Schmidt believes the state is “trailing far behind” in economic recovery. In an interview with Kansas Capitol […]
KANSAS STATE・2 DAYS AGO
KSNT News

TOPEKA, (KSNT)— Kansas gaming regulators are moving forward with sports betting plans. Still, an official start date for wagering in Kansas is “unknown,” according to Lottery officials. The Kansas Racing and Gaming Commission (KRGC) approved a set of temporary regulations on Friday, with the intent of setting permanent regulations later on. During the meeting, David […]
KANSAS STATE・1 DAY AGO
KSNT News

KANSAS (KSNT) – Over $24 million has been awarded to the Kansas Department of Wildlife and Parks for the improvement and expansion of the Flint Hills Trail. The announcement came on Thursday from the U.S. Department of Transportation. In total, $24,821,705 has been allocated to the KDWP for a project which will construct 40 miles […]
KANSAS STATE・2 DAYS AGO
KSNT News

Will KS Republicans back abortion restrictions after Primary loss?

TOPEKA, (KSNT)— Nearly 60% of Kansans voted to keep abortion rights in the state. But, the question remains whether Republican politicians originally backing the amendment will keep pushing to change that. Politicians in the state have stayed silent since last week’s vote. However, for the first time, in an interview with Kansas Capitol Bureau, Republican […]
KANSAS STATE・3 DAYS AGO
KSNT News

KANSAS (KSNT) – Kansas Republicans are rallying behind former President Donald Trump after the FBI raided his Mar-A-Lago estate. The investigation is looking into whether the former President mishandled classified documents. Many Republicans are brushing off the allegations and instead, focusing on a potential 2024 presidential run. Some of...
KANSAS STATE・3 DAYS AGO
KSNT News

KS Treasurer race ‘too close to call,’ could come down to provisional ballots

TOPEKA, (KSNT)— All eyes are on a Primary race for Kansas State Treasurer. Two Republicans, Steven Johnson and Caryn Tyson, are almost neck-and-neck for the GOP nomination. The race falls within a 1% margin, which means county election offices will have to review 10% of precincts for the race under the state’s new “close race […]
KANSAS STATE・4 DAYS AGO