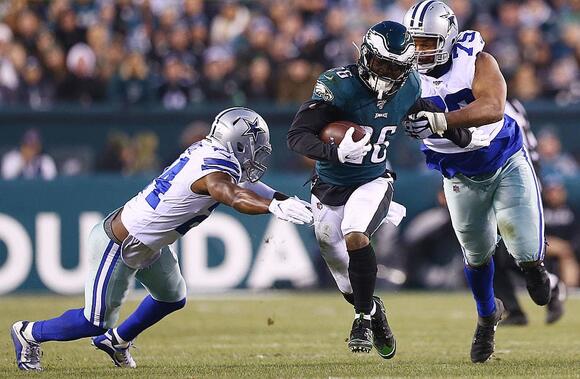 The Philadelphia Eagles made some significant and impressive moves this offseason, but was it enough for them to win the East?

FRISCO - Many so-called "experts" outside of the Philadelphia Eagles family have called their offseason moves some of the best in the league. The front office has seemingly improved the product on the field with additions like receiver A.J. Brown, linebackers Haasan Reddick and Nakobe Dean, and defensive tackle Jordan Davis.

Dean is fresh off a national championship at Georgia last season and should make an immediate impact for the Eagles.

Running back Miles Sanders - who is entering his fourth season with the Eagles - is especially excited about the additions the front office has made.

“Oh man. We all feel like we’re on an All-Star team, so we feel great,” Sanders said, via CBS Sports . “We feel unstoppable, I’m not gonna lie. The vibes are great, always have been. Nick Sirianni is doing a great job just keeping the vibes right, the chemistry good. We compete a lot in practice. But we’ve gotta see. It’s gonna come down to camp, taking it day by day, putting everything together.”

Last season, the Eagles finished with a 9-8 record and second in the East to the Dallas Cowboys . They earned a Wild Card spot in the playoffs but lost to the defending champion Tampa Bay Buccaneers 31-15.

Even with the perceived improvement and many additions to the roster, there are still lingering questions surrounding the quarterback position and starter Jalen Hurts that were not addressed this offseason.

Some may remember a decade or so ago when then-Eagles quarterback Vince Young called the 2011 Eagles a "Dream Team" after he signed with Philadelphia. But the dream died when the team finished the season 8-8 and missed the playoffs .

Eagles fans can only hope this "All-Star team" is better than that ill-fated "Dream Team."

Want the latest in breaking news and insider information on the Dallas Cowboys? Subscribe to the Daily Cowboys SI Newsletter with Mike Fisher now!

Follow along as we keep you up to date on Saturday night's preseason matchup versus Dallas and Denver.
DALLAS, TX・21 HOURS AGO
Cowboys Country

Jerry Jones said goodbye to three players - Cooper, Gregory and Collins - who didn't provide a manageable bang for buck. How would their rookie replacements do in their Cowboys debut at Denver?
DALLAS, TX・20 HOURS AGO
Cowboys Country

Highlights were as sparse as raindrops in DFW this Summer, as the sloppy Cowboys committed 17 penalties in losing to the Broncos in their preseason opener.
DENVER, CO・20 HOURS AGO
InsideTheVikings

There were some solid individual performances from the Vikings, but the offense mostly struggled.
MINNEAPOLIS, MN・36 MINUTES AGO

Watch: Joe Burrow Highlights and Other Clips From Bengals Practice

The 25-year-old returned to practice after undergoing an appendectomy on July 26
CINCINNATI, OH・35 MINUTES AGO
Cowboys Country

Follow along as we keep you up to date on Saturday night's preseason matchup versus Dallas and Denver.
DALLAS, TX・20 HOURS AGO
Cowboys Country

Cowboys vs. Broncos Preseason: Who Will Play?

The Broncos host the Cowboys on Saturday, in the first of three tune-up games for each club as the NFL regular season approaches.
DALLAS, TX・1 DAY AGO

Follow along as we keep you up to date on Saturday night's preseason matchup versus Dallas and Denver.
DALLAS, TX・22 HOURS AGO
AllRaptors

Christmas Day Schedule Leaked, Raptors Will Not Play, Per Report

The Broncos host the Cowboys on Saturday, in the first of three tune-up games for each club as the NFL regular season approaches.
DALLAS, TX・1 DAY AGO
Cowboys Country

Updated by the minute, our Cowboys NFL Free Agency and Trade Tracker: News and views on the roster-building effort
DALLAS, TX・2 DAYS AGO
Cowboys Country

The Dallas Cowboys offense in some ways struggled in Denver in Thursday's joint practice. However, Parsons, Prescott and Lamb all stood out.
DALLAS, TX・2 DAYS AGO
Cowboys Country

Smith did indeed get "dinged'' in a way that caused him to move toward trainers during the workout.
ARLINGTON, TX・2 DAYS AGO
Cowboys Country

The long history between these teams added another chapter Thursday.
DENVER, CO・2 DAYS AGO