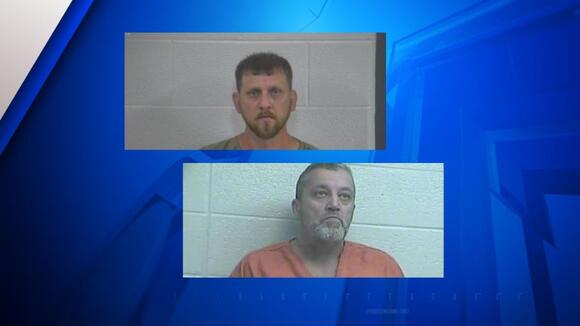 SOMERSET, Ky. ( FOX 56 ) – A collaboration involving Somerset Police Department and state and federal law enforcement partners has led to one of the largest drug seizures in Somerset police history.

Two Somerset men, Wesley Aaron Calhoun and Dennie A. Smith were indicted in a U.S. District Court on the backs of a five-month joint investigation between the Somerset PD, Kentucky State Police, the FBI, and the Drug Enforcement Administration.

Officers confirmed that 30 pounds of crystal methamphetamine, six handguns, two AR rifles, and over $30,000 in cash were confiscated.

The collaboration was part of a united vision between Somerset PD and the current Somerset mayor, according to Somerset Police Chief William Hunt.

“When Mayor (Alan) Keck took office three years ago, we had a vision for taking our narcotics division from one investigator to three and getting an officer assigned to the DEA Task Force to increase our capacity for conducting drug investigations,” Hunt said. “Our hope was that one day, doing so would lead to major seizures like this one.”

Hunt also said the vision is becoming a reality after three years.

“Because of these changes, we’re having a greater impact on public safety in our community, and we have more opportunities to develop relationships with state and federal partners,” Hunt said. “I am grateful to Mayor Keck and the Somerset City Council for seeing our vision and giving us the resources to extend our investigations.”

Three individuals accused in the murder of 32-year-old Jeremy Caldwell of Manchester have all entered guilty pleas.
LAUREL COUNTY, KY・13 HOURS AGO
FOX 56

Man arrested after threats to the University of the Cumberlands

A man has been arrested after allegedly calling and threatening a Williamsburg university Tuesday.
WILLIAMSBURG, KY・1 DAY AGO
FOX 56

At around 7:30 p.m. on Wednesday, KSP responded to a reported shooting on KY Highway 1481 in the Williamsburg community.
WILLIAMSBURG, KY・6 DAYS AGO
FOX 56

The Kentucky State Police are investigating a shooting that involved a Barbourville Police Officer and left one person dead.
BARBOURVILLE, KY・7 DAYS AGO
FOX 56

A Laurel County man has been arrest after being accused of raping a woman in July.
LAUREL COUNTY, KY・7 DAYS AGO
FOX 56

The centers announced on Saturday will allow flood survivors to apply for FEMA aid if they are without access to internet or electricity.
BREATHITT COUNTY, KY・4 DAYS AGO
FOX 56

A 22-year-old has passed following a three-vehicle accident that occurred this weekend in Rockcastle County.
ROCKCASTLE COUNTY, KY・9 DAYS AGO
FOX 56

Boyle County High School Head Football Coach Justin Haddix is originally from Breathitt County, which led to a conversation on how to aid in recovery.
BOYLE COUNTY, KY・6 DAYS AGO