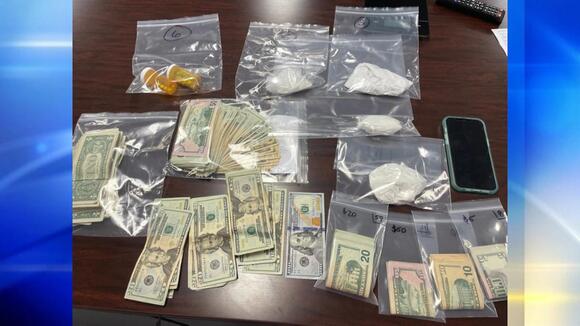 LIGONIER, Pa. — A pretty substantial drug bust in Westmoreland County netted 160 grams of raw fentanyl and the arrest of a suspected dealer.

Police said he is a heavy supplier of raw fentanyl in Westmoreland County.

He was found with the potent drug and arrested Tuesday night in the Giant Eagle parking lot in Ligonier, just a half hour after the store closed.

”This is one step farther to get our kids safe, and I am really glad they caught him,” Donna Hudec said.

Investigators said a confidential informant told them Haselrig would be bringing 50 grams of raw fenantyl to the Greensburg Ligonier area, enough for 2,500 individual packets.

Haselrig is the son of former Steeler Carlton Haselrig, who was from Johnstown and played for the Steelers for four seasons in the 90s.

Police said Haselrig fought with officers when they were trying to arrest him, and hurt a Ligonier Valley officer in the process.

A search of his house in Johnstown turned up another 110 grams of raw fentanyl.

In total, investigators said it has a street value of about $90,000.Folks we talked to said they’re surprised the arrest happened in Ligonier, but aren’t entirely surprised by what they found.”(I)t’s all over the place and I’m glad they did catch somebody and with that amount, to help our society. It’s all over,” Hudec said.

That officer is doing okay; he had an injury to his hand.

Haselrig is in the Westmoreland County Jail on $500,000 bail.

He is due in court next week.

No he got caught and that's a blessing,don't care who his father is,took a drug off the street that are causing a lot of deaths. He deserves jail time for his crime!!!!! 👏👏👏👏👏👏

he is a grown man. why do we need to know who his father is? just a way to grab headlines

CENTER TOWNSHIP, Pa. — A well-known former dentist in Beaver County shot and killed himself after being taken into custody by Center Township police. Former patients of Arpad Sooky were shocked to hear what led up to his death, and have a lot of questions as to how and why he had a gun in the police cruiser.
BEAVER COUNTY, PA・1 HOUR AGO
WPXI Pittsburgh

Man stabbed in Pittsburgh’s Larimer neighborhood after dispute with coworker, in critical condition

PITTSBURGH — A man was stabbed in Pittsburgh’s Larimer neighborhood after he and his coworker got into a fight, according to police. Allegheny County 911 confirmed to Channel 11 that police, fire and EMS units were called to the 6600 block of Frankstown Avenue around 12 p.m. Pittsburgh...
PITTSBURGH, PA・4 HOURS AGO
WPXI Pittsburgh

PITTSBURGH — Another weekend, another deadly shooting in the city of Pittsburgh. This time, in the Lincoln-Lemington neighborhood. A swarm of police responded to the Homewood north apartment complex on Everton Street just before 6:30 p.m. Sunday after a caller said a person had been shot. Pittsburgh public safety...
PITTSBURGH, PA・21 HOURS AGO
WPXI Pittsburgh

PITTSBURGH — Pittsburgh police are investigating after the front door of a popular bakery in the Strip District was smashed in. Pittsburgh police got a call around 2 a.m. that Pane è Pronto bakery, by Dianoia’s Eatery along Penn Avenue, was broken into. The bakery is down the street from the main restaurant.
PITTSBURGH, PA・11 HOURS AGO

MONROEVILLE, Pa. — A 3-year-old little girl spent hours in Children’s Hospital on Sunday evening after her family says she was mistakenly served alcohol at a Monroeville restaurant. The child’s mother said they were eating at Hibachi restaurant when the chef squirted sake into the little girl’s mouth...
MONROEVILLE, PA・1 HOUR AGO
WPXI Pittsburgh

Man shot, killed during argument outside of Uniontown VFW

UNIONTOWN, Pa. — One person is dead after being shot outside of a bar in Fayette County early Sunday. Lt. Tom Kolencik with the Uniontown City Police Department told Channel 11 officers were called to the VFW in the 300 block of East Main Street in Uniontown around 12:30 a.m. for a fight inside the bar.
UNIONTOWN, PA・1 DAY AGO
WPXI Pittsburgh

PITTSBURGH — The Allegheny County Courthouse was evacuated “out of an abundance of caution” after a bomb threat Monday, Allegheny County Communications Director Amie Downs told Channel 11. Downs said an anonymous call came in Monday morning that there was a bomb inside the courthouse. About 250...
ALLEGHENY COUNTY, PA・7 HOURS AGO
WPXI Pittsburgh

Man dies after being shot in North Braddock

NORTH BRADDOCK, Pa. — A man is dead after he was shot in North Braddock on Sunday evening. According to Allegheny County police, 911 was notified of a shooting in the area of Baldridge Avenue and Jones Avenue at 6:33 p.m. Once on scene, first responders found a 29-year-old...
ALLEGHENY COUNTY, PA・20 HOURS AGO

McKEESPORT, Pa. — One person is in the hospital and a car crashed into a house after an incident in McKeesport. Police are investigating two nearby scenes in McKeesport. Allegheny County dispatchers said police, fire and EMS were on the 1200 block of Meadow Street and the 1400 block of Craig Street.
MCKEESPORT, PA・1 DAY AGO
WPXI Pittsburgh

EAST MAHONING TOWNSHIP, Pa. — A man was killed after his tractor rolled on top of him in Indiana County. According to the Indiana County Coroner’s Office, the accident happened on Sunday around 12:16 p.m. near 2065 Deckers Point Road in East Mahoning Township. The coroner’s report said...
INDIANA COUNTY, PA・5 HOURS AGO
WPXI Pittsburgh

OHIOPYLE, Pa. — A woman died after the raft she was on overturned at Ohiopyle State Park in Fayette County Saturday afternoon. Park Operations Manager Ken Bisbee said that a 51-year-old woman from Ohio fell overboard when her raft overturned in one of the rapids on the Lower Youghiogheny River. She was rescued quickly by river guides, who began CPR on her.
FAYETTE COUNTY, PA・1 DAY AGO
WPXI Pittsburgh

Man crashes into building after leading state police in a chase in Fayette County, authorities say

SMITHFIELD, Pa. — Police said a man is facing charges after he led state troopers on a chase that ended when he crashed his vehicle into a building. State police said troopers began a pursuit after a vehicle sped past them at 90 mph in Smithfield. Officers tried to pull the speeding vehicle over, but the driver would not stop.
FAYETTE COUNTY, PA・1 DAY AGO

Shots fired outside of little league football game in Pittsburgh, no injuries reported

PITTSBURGH — Head coach and vice president of Lincoln Youth Sports Aaron Strader said dozens of little kids were playing a football game when someone opened fire in the 1400 block of Oberlin Street around 2:30 p.m. Channel 11 crews found a bullet through a windshield of a truck...
PITTSBURGH, PA・18 HOURS AGO
WPXI Pittsburgh

SALTLICK TOWNSHIP, Pa. — A 16-year-old boy from Connellsville was killed and two others were taken to the hospital after a crash in Fayette County Saturday afternoon. Pennsylvania state police said they were called to reports of an accident at the intersection of Indian Creek Valley Road and Calvary Church Road in Saltlick Township at around 2:58 p.m. Saturday.
FAYETTE COUNTY, PA・1 DAY AGO
WPXI Pittsburgh

PITTSBURGH — A 25-year-old has been charged after a late-night shooting on Pittsburgh’s South Side on Saturday. Jmel Jones has been charged with aggravated assault and recklessly endangering another person. Police responded to a ShotSpotter alert for the 1200 block of Roland Way around 11:20 p.m. Officers said...
PITTSBURGH, PA・1 DAY AGO
WPXI Pittsburgh

PITTSBURGH — Blank River Services Inc., a shipyard that operated at the Elizabeth Marine Ways for 27 years, has closed, the owners said. Susan Blank, who owned the business alongside her husband, Richard Blank, said declining traffic on the waterway led to the decision. Blank River Services, located at 1 Church St. in Elizabeth, repaired and built barges and towboats, using dry-docks and cradles to lift the watercraft onto land where they could be repaired.
PITTSBURGH, PA・6 HOURS AGO
WPXI Pittsburgh

Police search for mother, father after baby dies under ‘suspicious circumstances’ in Canonsburg

CANONSBURG, Pa. — Two people are facing charges after a 3-month-old girl died under suspicious circumstances and her older brother was found with fentanyl and cocaine in his system. Canonsburg police were called to a First Street home early Thursday morning for an unresponsive child. When they arrived, they...
CANONSBURG, PA・2 DAYS AGO
WPXI Pittsburgh

WILKINSBURG, Pa. — A 21-year-old man was injured in a shooting in Wilkinsburg early Sunday. The shooting happened around 12:34 a.m. in the area of Chalfant Street and Collins Road. Allegheny County police said when first responders arrived, they found a 21-year-old man who had been shot. He was...
WILKINSBURG, PA・1 DAY AGO
WPXI Pittsburgh

PITTSBURGH — It’s the most wonderful time of the year for fans of the Pittsburgh Steelers. “I think they’ll have a winning season,” said Mike Huber of Canton, Ohio. “I don’t usually come to preseason, but I couldn’t miss (Kenny) Pickett’s debut,” said Harry Wilson of Cranberry.
PITTSBURGH, PA・1 DAY AGO
WPXI Pittsburgh

McArdle Roadway will close daily through Friday for emergency work

PITTSBURGH — McArdle Roadway will close for emergency slope work every day this week. Beginning at 6 a.m. Monday, the road will be closed during daylight working hours and will reopen during off-hours at 7 p.m. During the closure times, the city said the current Liberty Bridge evening lane...
PITTSBURGH, PA・11 HOURS AGO