Meghan Markle suggests rallying with Gloria Steinem to back ERA 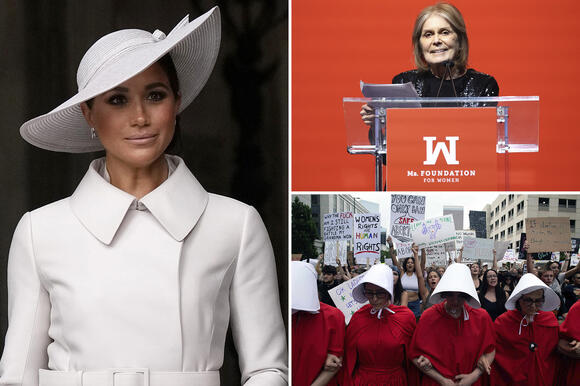 ​Meghan Markle, who said she and Prince Harry had a “guttural” reaction to Roe v. Wade being struck down by the Supreme Court, suggested in a recent interview that she might soon travel to Washington to rally support for the Equal Rights Amendment.

Markle — who reportedly has expressed political ambitions, including running to become the first female president — talked with feminist icon Gloria Steinem in Vogue about the Supreme Court’s decision and the future of the ERA.

Steinem talked about the need to get Americans to the polls to elect pro-choice candidates, saying “we can make clear that reproductive freedom is a fundamental right like freedom of speech.”

“It’s a much larger conversation about why for years, for decades, we’re fighting to get a constitutional amendment put through [the Equal Rights Amendment] that makes it clear that women can be treated equally, and how it is completely nonsensical that that’s even something we’re still fighting for,”​ the Duchess of Sussex responded.

“And Gloria, you know, we’ve talked about how to continue to push that through. I think now is probably the time more than ever before,” she continued.

“The ERA has been ratified by the requisite number of states and we should put the pressure on the White House and Congress to enact it,” Steinem said.

Markle, 40, responded: “Well, Gloria, maybe it seems as though you and I will be taking a trip to D.C. together soon.”

In fact, the ERA was ratified by 35 of the required 38 states before the initial March 1979 deadline. Three more states (Nevada, Illinois, and Virginia) have voted to ratify the amendment in recent years, but most experts believe those votes to be symbolic.

The royal’s political ambitions have been a point of speculation in the US and in the United Kingdom.

Reports indicate she has been working with Democrats to build fundraising and campaign teams for a potential White House run in 2024 if President Biden decides not to mount a re-election bid.

A British politician who served with former Prime Minister Tony Blair and has close ties to DC, has remarked about the “Suits” star’s future in politics.

“The Blairite, internationalist and Democratic Party networks are buzzing with talk about Meghan’s political ambitions and potential backers,” the anonymous source told ​the Daily Mail.​

Markle’s biographer, Omid Scobie, is on record saying that Markle has her “eyes set on the US presidency.”

“Meghan is the embodiment of the American dream. One day we may see Meghan become president,” ​Scobie, ​the author of “Finding Freedom: Harry, Meghan and the Making of a Modern Royal Family​,​” ​said in a documentary film.

A guest at Queen Elizabeth II’s funeral has revealed the sweet gesture that Prince Harry did to wife Meghan Markle in order to make her feel more “comfortable” during the service. On Monday 19 September, thousands of mourners and members of the royal family attended the State’s...
CELEBRITIES・10 DAYS AGO
Us Weekly

It’s been a rocky road for Meghan Markle and the British royal family since she fell in love with Prince Harry. The Suits alum started dating the prince during the summer of 2016. While she gushed about Harry to Vanity Fair during her September 2017 cover story, the couple spoke about their relationship — and preparing Meghan for royal life — for the first time during their engagement interview in November 2017.
CELEBRITIES・11 DAYS AGO
The Hill

On Wednesday, Sept. 28, I had the honor of receiving the John Robert Lewis Lifetime Legacy Award at the opening night Gala of the 10th anniversary of the March on Washington Film Festival. I can’t imagine a greater honor, but the taste is bittersweet. Not only because the great John Lewis is no longer with us, but because of the times we’re living in now.
ADVOCACY・20 MINUTES AGO
Salon

Florida Gov. Ron DeSantis, who recently made headlines for flying 48 migrants to Martha's Vineyard, was praised by Republicans for standing up against the Biden administration's immigration policies, but his political stunt has angered one of his closest allies – former President Donald Trump. Trump has privately accused DeSantis...
FLORIDA STATE・3 DAYS AGO

Royal fans are talking about a quick moment where Camilla, Queen Consort, seemingly lost her temper with Prince William and Kate Middleton's children. The moment happened during Queen Elizabeth II's state funeral on Monday, September 19th. As members of the Royal Family gathered outside of Wellington Arch to watch as...
CELEBRITIES・9 DAYS AGO
OK! Magazine

Kamala Harris awkwardly flubbed her speech while visiting the Korean Demilitarized Zone (DMZ) on Thursday, September 29. The Vice President was in the middle of lauding the United States' relationship with South Korea — known as The Republic of Korea — when she accidentally referred to them as a completely different country."The United States shares a very important relationship, which is an alliance with the Republic of North Korea," she declared. "And it is an alliance that is strong and enduring."PRESIDENT JOE BIDEN 'IRKED' AFTER LEARNING KAMALA HARRIS 'SOWING DIVISION' IN DEMOCRATIC CIRCLES AS PARTY MULLS WHETHER HE’S TOO OLD"I...
POTUS・19 HOURS AGO
Matthew C. Woodruff

Jared Kushner has agreed to pay a $3.25 million fine to the state of Maryland and to reimburse potentially tens of thousands of tenants of his 9000 rental units in Baltimore. The restitution will take the form of refunds to tenants who were charged illegal fees such as excessive application fees, improper agent fees, writ fees and unreturned security deposits.
MARYLAND STATE・23 HOURS AGO

Trump did not want to condemn white supremacists right away during his 2016 campaign. That's according to NYT's Maggie Haberman's forthcoming book, "Confidence Man." Trump told Chris Christie that "a lot of these people vote," referring to white supremacists. Then-2016 Republican presidential candidate Donald Trump did not immediately condemn white...
POTUS・2 DAYS AGO
Newsweek

Cruz's tweet was in response to a clip of Senator Amy Klobuchar saying that Hurricane Ian is a reason why voters should back Democrats in the midterms.
FLORIDA STATE・3 DAYS AGO
Salon

When former President Donald Trump went to court against the Justice Department to stall the federal investigation into classified documents at his Mar-a-Lago resort in Palm Beach, Florida, a district judge he appointed, Aileen Cannon, granted Trump everything he asked for, appointing a special master to review the documents for executive privilege even though no legal precedent grants a former president privilege over national security documents, and effectively blocking the DOJ from conducting a national security review until the special master's work is complete.
POTUS・2 DAYS AGO
Salon

With Hurricane Ian bearing down on Florida, it's completely understandable why the House committee investigating the January 6 insurrection postponed Wednesday's scheduled hearing. No new date has been scheduled, though it will be coming soon and is likely to be another doozy of a hearing. As Heather "Digby" Parton, notes, the word is that the committee will focus heavily on the role of long-time Donald Trump confidante Roger Stone, and the role he played in planning and executing the Capitol riot.
POTUS・2 DAYS AGO

US Congress signs off on $12 bn for war-torn Ukraine

The US Congress approved $12.3 billion in aid Friday to help Ukraine battle its invasion by Russia as part of a stopgap spending bill that averts a chaotic government shutdown ahead of a midnight deadline. Government shutdowns threaten the finances of hundreds of thousands of workers who risk being sent home without pay as parks, museums and other federal properties close.
FOREIGN POLICY・22 MINUTES AGO